Scare away any who might uncover its pirated music smuggling operation (failed).

The Pterodactyl Ghost is an antagonist in the Scooby-Doo franchise. It is a persona adopted by Johnny to smuggle pirated music, which would later become its own character in various subsequent adaptations, most notably in Scooby-Doo 2: Monsters Unleashed where a real version of it appeared as the secondary antagonist after being brought to life by the man once posing as him.

He was voiced by the late Casey Kasem.

In the The Scooby-Doo Show episode "Hang In There, Scooby-Doo!", the Pterodactyl Ghost was a scary humanoid pterodactyl. It terrorized a hang gliding contest. He was actually unmasked to be a man named Johnny, who was working for the hotel manager, who was the ringleader of a pirated CD smuggling operation.

In Scooby-Doo 2: Monsters Unleashed, the Pterodactyl Ghost was a man known as Jonathan Jacobo a thief and mad scientist who used his purloined cash to build monsters.

While he went to prison and supposedly died in a escape attempt, he survived and was the mastermind behind the whole mystery in the movie. He made another Pterodactyl Ghost costume and made a monster out of it.

The Pterodactyl Ghost appears in Scooby-Doo! Unmasked as a minor antagonist. A giant version appears as the boss in the final level.

In the 2022 Webseries, Mystery Incorporated, Velma learns about a man named Jonathan Jacobo, who, after witnessing two brutal murders, went on a crime spree, claiming he was told to by a demonic pterodactyl. While it is unknown whether the Pterodactyl Demon was real, it is implied it may be one of the demons from Hell, and it may be slated to appear in a future episode. 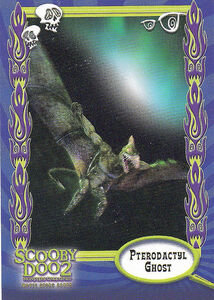 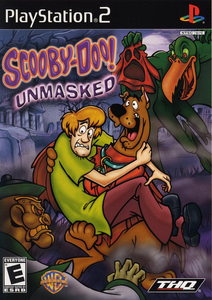