Member of the Pting race

Alien
The Pting is the antagonist of the Doctor Who episode "The Tsuranga Conundrum".

It is a small alien creature that has the ability to eat inorganic materials and is considered extremely dangerous.

In the 67th century, this Pting came onboard a hospital ship called the Tsuranga and planned to feed off the ship's energy.

The Pting begins to damage the Tsuranga's escape pods and sends the ship's head nurse Astos off in one of the escape pods as he inspects it before it explodes.

It tries to get to the ship's power source, which is defended by Yasmine Khan and Ryan Sinclair.

After discovering that the Pting was attracted to the Tsuranga because of it's energy sources, the Thirteenth Doctor removes the ship's built-in failsafe bomb and lures the Pting into an airlock and has it eat the bomb instead of the ship's power source.

Afterwards, the Doctor jettisons the Pting into space.

The Pting has light grey skin, blue eyes, three fingers on each hand, three toes on each foot and four antenna. 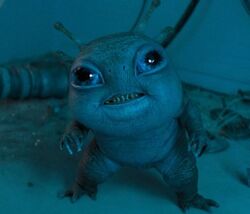 Add a photo to this gallery
Retrieved from "https://villains.fandom.com/wiki/Pting?oldid=3780412"
Community content is available under CC-BY-SA unless otherwise noted.