Castle of the Two Sisters outskirts

Shooting thorns from their back
Rolling

Gallus, Smolder, Ocellus, Yona and Silverstream take refuge from troubles at the School of Friendship via effectively running away, hiding near the Castle of the Two Sisters while Sandbar collects food from Ponyville.

Upon Sandbar's return the group eat and play, which causes a Puckwudgie to arrive - at first the Puckwudgie seems mostly interested in the prospect of food but after Ocellus tries to befriend the creature by changing into one herself it becomes furious and calls on an entire pack of Puckwudgies, which proceed to attack the group with quills.

The group are forced to take cover as the Puckwudgies swarm them but are rescued from further harm by the Mane Six, who capture the Puckwudgies in their own way - Rainbow Dash grabs them and sticks their thorns in a tree, Twilight and Starlight use their magic to disperse them away from the Young Six, Rarity makes them up so that they are disgusted, Spike tackles them with his head, Applejack laces and drags them- and launch them back into the wild via Pinkie Pie's party cannon. 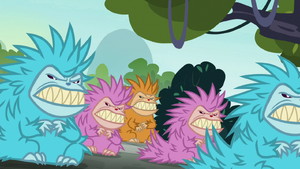 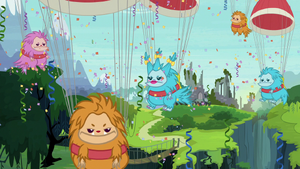 Retrieved from "https://villains.fandom.com/wiki/Puckwudgies?oldid=3615403"
Community content is available under CC-BY-SA unless otherwise noted.