Ability to cause destruction

Cause destruction in order to frame Gary to see him get punished by SpongeBob (succeeded).

Puffy Fluffy is a minor antagonist in the animated TV series SpongeBob Squarepants, only appearing in the episode "A Pal for Gary" as the main antagonist.

Puffy Fluffy was bought by SpongeBob, so that Gary would not be lonely while he was at work, even though Gary was perfectly fine with staying home alone as he could see television on his own. However, Puffy Fluffy turned out to be a ferocious monster and attacked Gary several times (while SpongeBob was oblivious to the entire situation).

SpongeBob never notices and blames Gary for the destruction of his house, which was really caused by Puffy Fluffy. Puffy Fluffy sheds his skin during the night and turns into his fully grown monstrous form, resulting in Gary battling him throughout the house the entire night.

When SpongeBob starts to scold Gary, ignoring the fact that Puffy Fluffy is now trying to devour the snail with his tongues, the monster decides to eat him instead. Gary saves his owner's life by tangling up Puffy Fluffy's extra mouths with his own leash, preventing him from eating and sending the monster running out of the house in a sobbing panic.

Even so, SpongeBob still scolds Gary for chasing Puffy Fluffy away, even though Gary ended up saving his life and the house.

Puffy Fluffy is a nudibranch (although not resembling an actual nudibranch at all), first appearing as a small, chubby green fish with a goofy expression and razor sharp teeth. However, he eventually evolves into a huge lamprey-like beast with several sucker-like tongues inside his mouth. 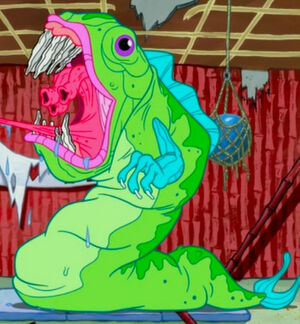 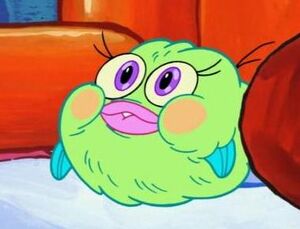 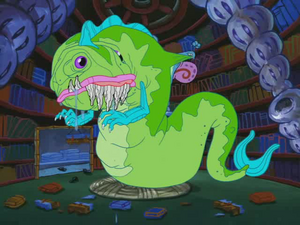 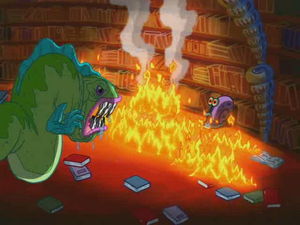 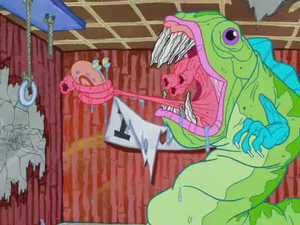 Puffy Fluffy about to eat Gary. 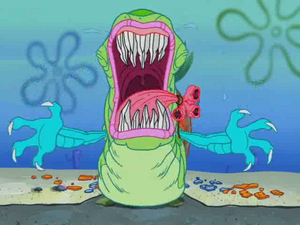 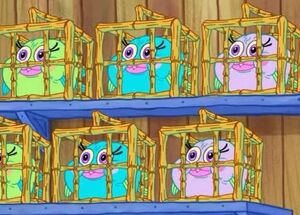