Puftoss is the fourth boss in Donkey Kong 64. He is fought by Lanky Kong in Gloomy Galleon, the fourth level of the game. Whether or not he is a servant of King K. Rool is currently unknown.

Puftoss is a gigantic Puftup with a golden color scheme on its top, in comparison to the purple one seen on the usual Puftups. Other notable differences are the three jagged teeth on his lower jaw, and decidedly more frightening eyes, with more of a red tint to them than the usual Puftups.

Upon entering the galleon arena, Lanky Kong finds himself in a small, coconut-shaped motorboat, just large enough for him to fit in. He looks around briefly, and a massive black silhouette is shown in front of him, letting out a growling sound. Lanky looks forward, letting out a frightened sound before switching on the light of his boat. Puftoss is then revealed, lets out a bellow that almost makes Lanky faint, and then the battle begins. Upon his defeat, Puftoss puffs up to his full size before his air starts coming out, the massive Puftup flying around the arena like a deflating balloon and slowly decreasing in size. When his air is all gone, he is left as a flat shape smaller than Lanky's boat, which floats down to the center of the arena, vanishing as it touches the water and leaving the fourth key in its place.

Lanky Kong must navigate the boat around the arena, avoiding Puftoss' fireballs, shockwaves, and smaller Puftups as he drives the boat through the DK Stars on the water's surface. After driving through a star, an electric pole will rise out of the water and a 30 second countdown will start. Lanky must reach the next star before the countdown reaches 0; once all five poles have surfaced, they will produce an electric current that shocks Puftoss. After each shock, the stars get smaller and the countdown decreases by five seconds.

Puftoss is defeated when Lanky electrocutes him five times. 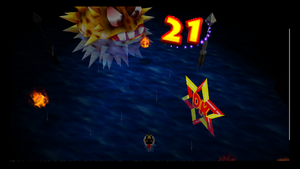 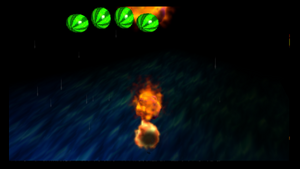 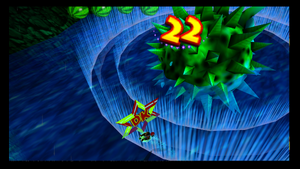 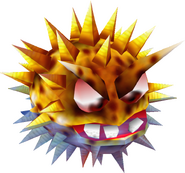