Help Babidi with his goals.

He was voiced by Takuya Matsumaru in DBZ and DBZ Kai and Shinobu Satouchi in DBGT and Dragon Ball Z: Budokai Tenkaichi 3 in Japanese and Ted Cole in Ocean Dub, and Mike McFarland in Funimation Dub in English.

Pui Pui has a long skull similar to Appule, but has yellow eyes. He also has a chest plate, and spikes on his back, similar to Frieza's appearance in his third form. Like every minion of Babidi, Pui Pui has a mark of a black letter "M" on his forehead.

After Babidi killed Spopovich, he had Pui Pui kill Yamu with an energy wave.

At the first level of Babidi's spaceship, Babidi sent Pui Pui over to the level to fight Goku, Vegeta, and Gohan and take their energy for Majin Buu. Through rock-paper-scissors, they decided that Vegeta should fight Pui Pui. Vegeta easily beat him up, so Babidi took them to Pui Pui's home planet, Planet Zoon, which has ten times Earth's gravity. Vegeta didn't even notice a difference. He beat up Pui Pui some more. Before Vegeta killed Pui Pui, he told him that he endured 500 times earth's normal gravity, and then destroyed him with an energy blast, point blank.

Pui Pui returned in Dragon Ball GT, where he escaped from Hell along with other past villains. Goten quickly defeats Pui Pui by sending him a kick to the wall, killing him. Pui Pui was then sent to Hell once again.

Like nearly every villain in the Dragon Ball Series, Pui Pui, can fly, and can generate multiple Ki blasts. Presumably, his most powerful Ki attack is the Pui Pui Nice Shot. 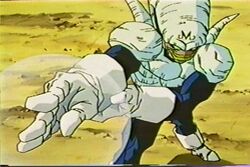 Pui Pui about to kill Yamu. 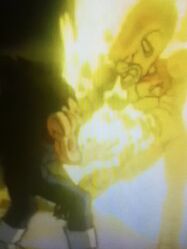