The Pumpkin Eater is the titular main antagonist of the haunted maze attraction of the same name at Knotts Scary Farm, the annual Halloween overlay for Knotts Berry Farm amusement park. He is a monstrous killer who terrorizes a small town and devours the people in it as well as their pumpkin crop.

It is unknown where the Pumpkin Eater came from, but he appeared one day in a small town in the woods surrounding The Hallow (a scare zone in Knotts Scary Farm). There, he terrorized the town by devouring their pumpkin crops, then going after the people in the town. He would break into homes and kill all inside, including women and children. After killing them, he would remove their faces and line them on the walls of the house before presumably devouring the corpses. The houses would be burned down the next morning, with only the walls with the faces remaining. This continued until the entire town was destroyed, and all of its residents killed off. The Pumpkin Eater then retired to a giant pumpkin and dwelled there. The nursery rhyme "Peter Peter Pumpkin Eater" was later adapted from the events, but they were simply legend and eventually the source faded into obscurity.

Years later, guests began arriving at the now haunted town again, awakening the Pumpkin Eater and allowing him to embark on another murderous rampage.

Guests begin by entering the haunted town, where the bloodied ghosts of the Pumpkin Eater's victims dwell, angry, violent, and warning guests of the monster. The Pumpkin Eater himself stalks the area, following and lashing out at guests. The guests travel though the old houses, where they see the faces lining the walls, corpses hanging from the rafters, and ghosts walking about.

Guests then find themselves at the Pumpkin Eater's abode: a massive jack-o-lantern situated near a thorny cornfield. Guests enter to find the place filled with corpses and living pumpkin monsters. As they continue, they will see the Pumpkin Eater surrounded in giant insects, which lunge at guests. The Pumpkin Eater is shown to be keeping people alive in another jack-o-lantern, torturing them. Soon, guests exit the giant pumpkin to enter a twisted thorn patch with giant plants and corpses entangled in the thorns.

Guests then enter a deadly cornfield, where the Pumpkin Eater is shown to be using people, both dead and alive, as scarecrows to protect the crops. However, these "scarecrows" are not designed to scare the crows away from the crops, but rather attract them with their meat so the crows will eat them instead. Guests then find themselves in a small cabin, where the Pumpkin Eater is seen putting live people into a meat grinder. Finally, as the ghosts flee, guests find the Pumpkin Eater's gory pumpkin pie oven, and then are caught, eaten, and digested.

While it is not fully known why the Pumpkin Eater does what he does, it is obvious that he is a sadistic and violent killer, embracing a desire to kill and devour humans. The humans that he does not eat he uses either as decoration, slaves, scarecrows, or simply torture victims. Since he is pumpkin-like in nature, his eating of pumpkins makes him cannibalistic as well.

The Pumpkin Eater is 7 feet tall and covered in brown cloths and dead leaves. He has a jack-o-lantern either on his head or as his head, and is covered in thorn vines, many of which seem to be growing directly out of his body. He has long wooden fingers and claws, and is commonly seen covered in blood and dirt. 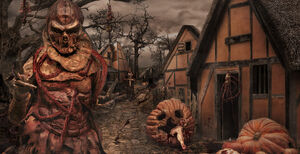 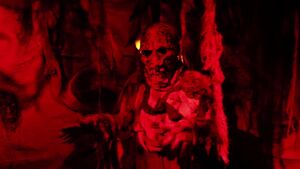 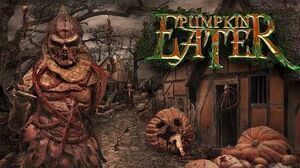 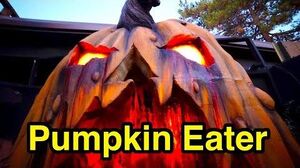 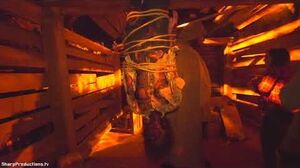 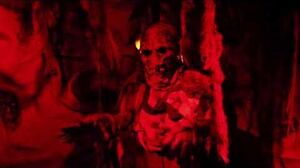 Retrieved from "https://villains.fandom.com/wiki/Pumpkin_Eater?oldid=3961906"
Community content is available under CC-BY-SA unless otherwise noted.