Beat (sometimes kill) those that get in his way.

Punch (sometimes known as Mr. Punch) is a popular British icon and part of the long-running tradition of the Punch and Judy puppet show. Despite Punch being one of the main protagonists he is also antagonistic and has crossed the line into villainy, especially in older takes of the show, which often have Punch going on a rampage, in wild abandon of logic or reason, only to meet his end at the hands of the Devil or Hangman (though in some older stories the invincible Punch even manages to defeat the Devil and the show ends with him counting the many fallen foes he has beaten along the show's madcap journey).

Due to the very nature of Punch and Judy the origins of Punch are complex and span many centuries, he is in many ways the embodiment of a chaotic trickster and was a popular symbolism for both the "clown" (for audiences to laugh at) and the object of caution (to warn audiences of immoral behavior and the consequences of such).

Traditionally Punch is a wild, drunken man who cares very little for social norms and will not hesitate to endanger others, including outright assaulting them, for example he commonly mistreats his children and is infamous for his abuse of his wife, Judy (though in fairness Judy too was not above giving Punch a sound beating).

Indeed the two became quite controversial as time grew, due to increased awareness of domestic abuse, this has caused some modern takes on the show to soften the original violence and makes Punch much less of a malicious character, though he is still frequently antagonistic and many argue that the very core of Punch and Judy demands him to be so.

This in part came from the fact that the older takes of Punch and Judy was not really intended for children at all and Punch thus grew progressively more violent and immoral (such as having his own mistress and attacking authorities). As time grew many performers started to realize they could profit from a wider audience and thus these elements were removed, most notable of which is the near-extinction of the Devil or the Hangman from most Punch and Judy shows, who in traditional works would usually serve Punch his final justice (some performers continue to display these controversial works however and both the more tamed version Punch and his older, more malicious persona remain popular, especially in seaside resorts.).

In the very basic story of Punch & Judy ("as is should be told", according to some traditionalists) begins with Mr. Punch being neglectful or otherwise endangering his young child, which prompts an angry Judy to berate and often strike him, this quickly escalates into utter madness as Punch assaults his wife, causing police to arrive, whom he also beats, more and more characters arrive and face Punch's wrath until either the Devil or Hangman arrives, in some takes they finally give Punch his well-earned punishments while in others even they are swiftly dealt with by Punch.

As society's outlook on violence changed many performances switched to focus more on the absurd characters and scenarios, thus Punch is much more of a silly buffoon than anything truly malicious and he is most often beating up crocodiles or other less offensive targets, Judy is also often given more room to cause chaos, the Devil and the Hangman are not present in these shows.

Due to the long tradition of the show and its striking characters Punch and Judy has frequently been referenced in popular culture and due to his nature as a violent, clown-like chaos-bringer Punch has inspired more than a few villains over the years, some of which include: 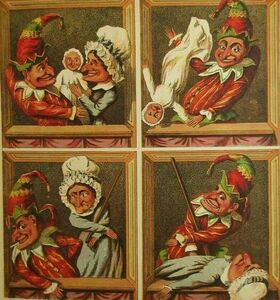 The traditional depiction of Punch (in his more antagonistic persona). 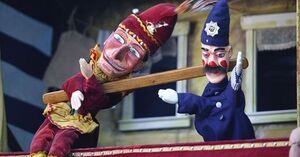 Punch assaulting the police (one of several confrontations often removed from modern shows).
Add a photo to this gallery
Retrieved from "https://villains.fandom.com/wiki/Punch?oldid=3666273"
Community content is available under CC-BY-SA unless otherwise noted.