To rule Jump City by controlling Teen Titans' lifeless bodies, along with their abilities (briefly succeeded)

The Puppet King is a minor antagonist in the TV show Teen Titans. He appears as the main antagonist in the season 1 episode "Switched". His goal is to collect the souls of the Teen Titans and place them into his puppets, doing so will give him full control of the Titans' bodies.

He was voiced by Tracey Walter.

The Puppet King is a presumably either a possesed puppet or a human inside a puppet costume. He wears a crown on his head and wears a tin soldier outfit. He carries a remote control that grants him the ability to control souless bodies.

Later, however, the Puppet King was somehow brought back to life and recruited into the Brotherhood of Evil. He appeared in the race initiated by Ding Dong Daddy for Robin's most secret possession as one of it's villainous contestants, but was taken out in a mass crash triggered by Red X. When the Brotherhood executed it's plan to eliminate young superheroes around the world, the Puppet King assisted Control Freak in capturing Killowat. During the subsequent assault of Beast Boy's team on the Brotherhood's base, the Puppet King confronted Más, who slammed him right into the next wall. Subsequently, when the Titans united for their final fight, the Puppet King joined his fellow villains in defeat. 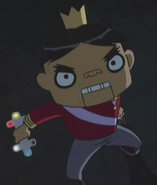 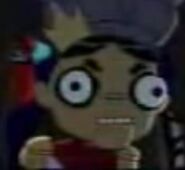 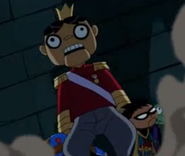