Pinocchio and the Emperor of the Night

Putting on a show.

Loves being rich and famous.

Continue living his dreams as a greatest puppeteer (failed).

Bring innocent strangers and kidnapped children into the Empire of the Night for his master.

He was voiced by the late William Windom.

Puppetino was the self-proclaimed greatest puppet master in the world. He was but an amateur puppeteer with dreams of fame and fortune long ago. He was approached by an ominous entity called the Emperor of the Night with an offer of making his dreams come true in exchange for his services to him.

Puppetino agreed and worked for the Emperor. His job was to host a traveling carnival as its official ringmaster, but at the same time, tricked other people, even with dreams of loneliness, fame or greed, into joining the circus. Then at that moment of their acceptance, Puppetino uses his enchanted organ grinder box to begin their transformation and than take them into his master's secret kingdom, the Empire of the Night.

A bee named Lieutenant Grumblebee finds a large ship on a riverbank. He spotted and observes Puppetino — the chief henchman of the Emperor of the Night — remarking that the area is the perfect place to open ground for his wicked carnival. Stakes and ropes fly from the ship, and a circus tent forms. Grumblebee soon left the area and never comes back.

A year later, the young boy Pinocchio after he traded his father's jeweled box for a fake ruby gem given to him by 2 con-artists Scalawag and Igor, looks for work at the carnival and is entranced by a blonde marionette named Twinkle. Puppetino who recognizes Pinocchio as the puppet he once saw before, uses Twinkle to lure Pinocchio into joining the carnival. Puppetino spins an organ grinder and Pinocchio begins dancing against his will as he is transformed back into a puppet. Puppetino magically attaches strings to Pinocchio's hands and feet and hangs him up with Twinkle. The Good Fairy appears and awakens Pinocchio, explaining that he lost his freedom because he took it for granted. His Fairy Godmother reminds him of the importance of choice before restoring him to human form. He and his friend Willikers who came to Pinocchio's rescue, both escaped from Puppetino's carnival.

Pinocchio decides to retrieve the jewel box. Willikers is upset so Pinocchio sets him aside and travels alone. He finds Scalawag and Igor, who inform him that the box is at the carnival, which has returned to the ship. They pursue it by boat, but the ship suddenly opens up, swallowing the boat. Willikers, carried to the river by Grumblebee, latches onto Pinocchio's pocket as they drift into the ship.

Upon their arrival in the dark interiors of the ship, Scalawag recognizes the vessel as "the Empire of the Night". A mysterious boatman offers Pinocchio a ride to the jewel box, leaving Scalawag and Igor behind. The boatman says the box is in the opposite, darker end of a cavern. Pinocchio prefers the brighter path and they row towards the "Neon Cabaret". A doorman says that Pinocchio can play inside if he signs a contract. Pinocchio impulsively agrees, running inside and drinking from a fountain of green liquid that causes him to hallucinate and black out. Pinocchio awakens on a stage; a ringmaster says his fans are waiting and Pinocchio begins dancing. Scalawag and Igor, who have followed Pinocchio, try to get Pinocchio's attention but are drawn offstage while he is distracted by Twinkle. Pinocchio bows to thunderous applause.

Puppetino suddenly appears as the evil puppeteer smiles, and Pinocchio turns to find the boatman, who transforms into the doorman and then the ringmaster. He tells Pinocchio that he has reached the "Land Where Dreams Come True" and then morphs into a floating demonic being with four arms — the Emperor of the Night. He demands Pinocchio sign a contract that will make him a puppet again, a choice that will weaken the Good Fairy. Pinocchio refuses and is imprisoned with Scalawag and Igor. Scalawag laments that they have succumbed to their desires without considering the consequences. Puppetino on behalf of his master arrived to one of the carnival's wagons to tell the prisoners that the Emperor is waiting for them but he has a surprise for Pinocchio.

The Emperor reveals to Pinocchio that Geppetto has been shrunk to fit inside the jewel box. Pinocchio offers to sign the contract if the Emperor frees Geppetto and the others. Pinocchio signs away his freedom, transforming back into a living puppet.

The Emperor betrays Pinocchio, revealing that he had no intention to fulfill his end of the bargain and ordered Puppetino to take them to his master's dungeon. Hearing the voice of Pinocchio's Fairy Godmother telling him that the freedom of choice gives him his power. Pinocchio turns on the Emperor and a blue aura — the light of the Good Fairy — surrounds him. The Emperor shoots bolts of flame at Pinocchio but the blue light protects him as the ship catches fire. Pinocchio and his friends escaped while the Emperor kills Puppetino for his instant cowardice while he was running for his life. He was turned into a lifeless puppet, and burned to death immediately after. 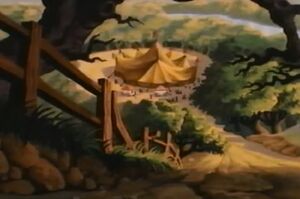 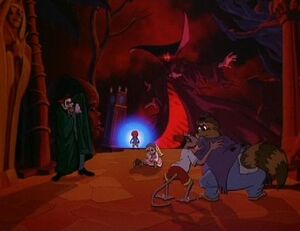 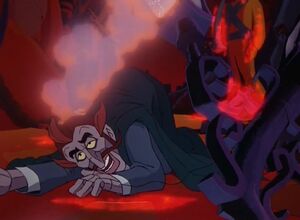 Puppetino now becomes a dead puppet as punishment for his failed servitude to the Emperor of the Night.
Add a photo to this gallery

Retrieved from "https://villains.fandom.com/wiki/Puppetino?oldid=3874433"
Community content is available under CC-BY-SA unless otherwise noted.