The Tytonic Union of Pure Ones

Eliminate the Guardians of Ga'Hoole and purify the owl kingdoms (failed).

Militaristic Supremacists
The Pure Ones are a supremacist race of evil owls and the primary antagonistic group in the Guardians of Ga'Hoole book series as well as the movie, Legend of the Guardians: The Owls of Ga'hoole. They were a large owl group consisting mainly of the family Tytonidae, more commonly known as Barn Owls, comprised of subspecies such as Tyto alba, Tyto tenebricosa, and Tyto multipunctata. Their main goal was to eliminate the Guardians of Ga'Hoole and "purify" the owl kingdoms.

Their full name was the "Tytonic Union of Pure Ones".

The Pure Ones were founded on the idea that owls of the Tyto race were the strongest and most superior species of owl, and that all other species be either exterminated or made into slaves. There was a hierarchy of owl species even within the Pure Ones ranks, with Barn owls being the highest species, followed by Masked, Grass, and Sooty owls. The methods and ideals of the Pure Ones are based off of the real-life Nazi Party in their race supremacy and genocidal plans.

They were originally led by an unnamed barn owl, but were taken over by Kludd, in a duel. Kludd and his wife Nyra lead the Pure Ones to battle against the Guardians of the Great Ga'Hoole tree, once putting it at siege.

In the film, majorities of Pure Ones all wore gray metal masks which covered most of their faces, with large, gray battle claws, and their eyes were collectively a glowing red color. The fringes of their wings and tail feathers were red, as well as a cross-shaped section of their chest. According to Grimble, the Pure Ones were fond of dying the feathers of their captives to fit their own preferred coloration, perhaps giving some insight into the unnatural red color displayed in their feathers. Though the Pure Ones entire forces may not have been present in the film, there were little over 200 Pure Ones in the canyons of St. Aggie's, signifying that the Pure Ones were, at that time, a relatively small fraction of owls.

The Pure Ones are known to have existed long before the events of the book series, but little is known about their history. However, they had already begun the process of having the leader called the High Tyto. It is also known that they used the powers of small magnetic flecks of iron as weapons, which could disorient birds' navigational skills and even their minds themselves. The Pure Ones captured hatchlings and brainwashed them by the use of flecks.

Kludd, a young Barn Owl living in the forest of Tyto, was recruited for the Pure Ones by a female Barn Owl named Nyra, who had been a hagsfiend in her past life and reincarnated. Kludd rose in rank and eventually killed the former High Tyto in ritual combat, but at the cost of a large portion of his face, which he replaced with a mask of mu metal. This earned him the name "Metal Beak" by the owls, such as the Guardians of Ga'Hoole, that were unaware of his true name. Taking Nyra as his mate, he assumed the mantle of High Tyto and contemplated a plan to capture and brainwashed the old sage Ezylryb, a warrior-turned poet also known as Lyze of Kiel, with great knowledge of the Northern Kingdoms-knowledge the Pure Ones could use to their advantage.

Unfortunately, before the plan could be put into action, a patrol from St. Aegolius Academy for Orphaned Owls discovered their base and snatched all the hatchlings for use in their own army and planned to conquer the owl world. The Pure Ones fought to return the hatchlings, whom they viewed as rightfully theirs, and the hatchlings were dropped. This event was later known as the Great Downing. The Guardians of Ga’Hoole recovered most of them and reversed the Pure Ones’ brainwashing, alerting the owl world to the Pure Ones’ presence. Ezylryb was dispatched to discover the cause of the event, and fell right into a trap, being lost among a triangle of flecks, or the Devil's Triangle, specially arranged so that within it, senses of navigation were lost, and there was no hope of escape. The Pure Ones planned to hold him there until they could find a new stronghold.

At an unknown time, another plan was implemented: to send spies to the heart of St. Aegolius and pave the way for a Pure One invasion.

Soren, Kludd's younger brother and believed by him to be dead, led a small band of owls to destroy the Devil's Triangle and free Ezylryb. Kludd and nine other Tyto owls, including his lieutenant Wortmore, were unwilling to accept the failure of his plan. Confident, they attacked the unarmed owls. However they were surprised by Twilight's taunting and the fact that their enemies fought with fire. Soren managed to wedge a burning stick under Kludd's metal mask. Screaming and shrieking curses, Kludd fled, and the Guardians left with Ezylryb.

Kludd dove into a lake to stop the molten mask from melting his face off, and was discovered by the Glauxian Brother Simon, whom Kludd murdered upon his recovery. He returned to the majority of his forces, and they began to assemble an army of hireclaws to lay siege on the Guardians of Ga’Hoole. The rogue smith of Silverveil was assigned to make Kludd a new mask, but she betrayed them upon doing so, escaping to alert the Great Ga’Hoole Tree of the oncoming siege.

Meanwhile, the spies in St. Aegolius fail to remain undercover and are discovered by the academy’s leaders when some Pure Ones defect to the other side. However, they do not know why the Pure Ones place flecks in unhatched eggs’ nests (an effect which leads to shattering). A spy named Otulissa from a third party, the Guardians of Ga’Hoole, gives the academy false information regarding flecks.

Kludd’s army was assembled and laid siege on the Great Tree. After a period of time, a section of the defense fell, but the Pure Ones were then caught in a pincer movement. Defeat for the Pure Ones was ensured when the extremely dangerous flying snake Slynella arrived on the battlefield on the side of the Guardians, forcing a retreat.

After the failed attempt to seize the Great Ga'Hoole Tree, the Pure Ones gathered their strength once again, but this time they launched an invasion against St. Aggie's that was led by Kludd. Meanwhile, his mate, Nyra, undertook a covert mission involving the infiltration of the great tree in the pursuit for the knowledge of higher magnetics. During the siege, a slipgizzle named Ginger was placed in the tree who pretended to be a defecting Pure One. Through Ginger, Nyra was able to shatter Eglantine and manipulate her into bringing her bits of information about flecks in a hollow located in The Beaks. After their plan to shatter Eglantine failed and the Sacred Orb(an egg) was smashed, they managed to conquer St. Aggie's and gained control of the massive fleck stores there.

The Pure Ones set up camp in the St. Aegolius Canyons and enforced their position using Devil's Triangles. The Guardians launched a massive counterattack in the form of an invasion, planned by the Spotted Owl Otulissa. With help from the Kielian League, the Guardians practically decimated the Pure One's ranks and set fire to the canyons, destroying the flecks and their power. During a cave battle, the High Tyto Kludd was killed by the Guardian Twilight, which was a devastating blow to the Pure Ones. In the battle's aftermath, Nyra managed to survive and mourned Kludd as their son Nyroc hatched from his egg.

Several remnants of the Pure Ones resided at St. Aegolius's canyons after the Battle of Fire and Ice. Kludd and Nyra's son, Nyroc, was planned to be the next supreme emperor of the Tytonic Union. But as time passed, Nyroc rejected the ways of the Pure Ones and fled.

Nyra allied herself with the vyrwolves, former Dire Wolves of the MacHeath clan who had transformed themselves by drinking water from the Tunnel of Despair. Stryker managed to gain possession of The Book of Kreeth by orders from Nyra, who hoped by using the ashes of her dead mate Kludd, the book, and the water in the Tunnel to recreate her son as a hagsfiend. Their plan failed when they were attacked by a force of owls from the Great Tree led by Nyroc (now known as Coryn) and Soren, and a group of Dire Wolves led by Hamish and Gyllbane. All of the vyrwolves were killed, and the remaining Pure Ones forced to flee. During the battle, Nyra lost The Book of Kreeth to the Guardians.

The River of Wind

Nyra traveled with what few soldiers she had left to the Middle Kingdoms to transform the "Dragon Owls" into their past forms, hagsfiends. Her plan failed, and only she escaped alive into a crevice in the cave.

In the final chapter Coryn sees Nyra making a deal with The Striga through a fire.

The War of the Ember

Nyra and The Striga "reawoke" the hasgsfiends inside the dragon owls, creating a small army. These are killed, along with the hagsfiend eggs, by the wolves of the Beyond the Beyond. In the final moments of the battle, Nyra is fatally wounded by Soren with an ice splinter, and later burned up by lava despite the efforts of the Striga trying to save her. The Striga snaps and slices off Coryn's port wing, only to be brutally decapitated by Soren, who was wearing Ezylryb's battle claws. Coryn then died of blood loss, leaving no more known living Pure Ones in the owl kingdoms other than the possibility of Ginger surviving, whose fate was never revealed after the events of The Shattering. With the exceptions of Uglamore and Coryn (and again, possibly Ginger), all Pure Ones now rest in Hagsmire. Coryn died before mating with another Tyto, or even finding a mate.

Nyra and the Pure Ones are mentioned, being called "a legion of hellish owls" by Gwynneth.

The Pure Ones accepted any Tyto into their ranks, believing all other species of owls to be "impure" and unworthy of living in the idealistic world created by their leader, Metal Beak (real name Surtr), and his wife and second-in-command, Nyra. They patrolled and surveyed the comings and goings of St. Aggie's, making sure that the slave-takers (those that captured young owlets for the purpose of serving the Pure Ones) were doing their jobs correctly and efficiently. When the Guardians infiltrated their stronghold, they battled fiercely against them, though their fighting skills were not nearly as refined. Instead of battling talon-to-talon, the Pure Ones preferred to lure the Guardians into the Devil's Triangle, where deposits of flecks rendered them unable to fight.

In the film, Kludd is a separate character from Metal Beak and is instead a Pure One soldier rather than leader. Metal Beak whom featured in the film was called Surtr, whom possibly also inspired by the unnamed Pure Ones leader that was killed by Kludd in books in order to usurp the control of Pure Ones.

In the film, Nyra, the second-in-command of the Pure Ones, took Tytos captured by the snatchers and began to train them to become soldiers in the Pure Ones' army. She did not only take Barn Owls, signifying the Pure Ones were more lenient in the movie towards which Tytos they accepted as most pure. She created for them a series of trials in which to measure their true ability, including the chase and capture of a young bluebird, testing the owls' agility and accuracy. 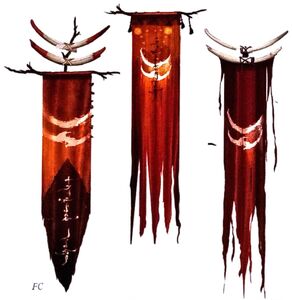 Retrieved from "https://villains.fandom.com/wiki/Pure_Ones?oldid=3797015"
Community content is available under CC-BY-SA unless otherwise noted.