Satanic Vampire
Purgatori is a character from Brian Pulido's Chaos! comics. She has appeared in several series, and developed relationships with many of the different characters.

Purgatori was born as Sakkara, a slave in Ancient Egypt, where she was put to work building the pyramids. Eventually, the Pharaoh Ostraca fell in love with her, and Purgatori was able to move into the her palace as part of the queen's harem. Eventually, however, The Pharaoh had to marry a man for political reasons, and it was decided that all of her harem had to be killed. Sakkarra barely escaped with her life, and started to seek revenge.

She eventually met a Celtic Vampire named Rath, and he turned her into a vampire. Apparently Sakarra had the blood of fallen angels in her, causing he vampiric form to be totally unlike any being before her. Using her newfound powers, she took revenge on her former lover and her new husband by inciting rebellion, turning them into vampiares, and burying them alive. After this Purgatori began to wander the universe, gaining the worship of many vampires and drinking the blood of many beings. On her travels she discovered that her favorite blood was that of a god in turmoil.

After She took her revenge, she began a relationship with Lucifer. Due to a combination of his wife's jealousy, and Purgatori's growing resentment of Lucifer, he had to banish her from Hell. But it seemed Lucifer truly did love her, as he sent her to a realm occupied only by Greek demigods upon which she could feed.

She was eventually freed by Lady Death who she recognized as a Goddess. Keeping herself discrete, Purgatori cast illusions of Lady Death's mother, in the hopes of driving her into despair. She was eventually found out by Lady Death, but before the two could finish their battle Lucifer returned to Hell and kicked out Purgatori once more. Later in life her super-villian identity was kept on until she went to Chicago for awhile in disguise as a business woman to in search for Lucifer only for him to too be there as well. Moments after meeting with a young Dark beautiful Mage in to having a crush on him to further notice while Lucifer was watching the entire time as lady deaths spy.

Purgatori is a master sorceress, capable of fooling gods easily with her illusions. She is also a vampire, capable of flight and transformation. While she is not as good a sword-fighter as Lady Death, she has still shown the ability to use swords effectively. 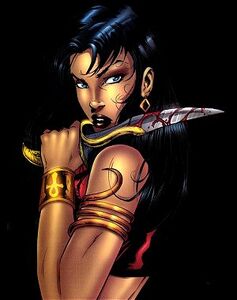 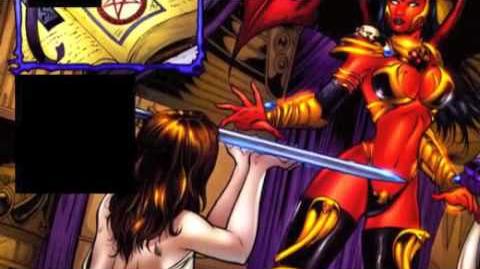 Purgatori Seven Devils
Add a photo to this gallery
Retrieved from "https://villains.fandom.com/wiki/Purgatori?oldid=3882694"
Community content is available under CC-BY-SA unless otherwise noted.