During or after 19 BBY

Eliminate anything that threatens the Galactic Empire.

The Purge Troopers are recurring antagonists in the epic space opera franchise Star Wars. They are a specialized class of Imperial soldier trained and equipped to assist the Inquisitors in hunting down Jedi and other Force-sensitive beings who threaten the Empire. Borrowing tactics and methods first used by the Republic clone soldiers that accompanied Jedi generals during the Clone Wars, this elite group is few in number and keeps out of the public eye. Most citizens of the Empire are unaware they even exist.

The Purge Troopers were formed sometime either during or after 19 BBY and were formed from the last batch of Jango Fett clones produced on Kamino prior to the cloning facilities being shut down in favor of human recruits. As the Jango Fett clones were to be phased out of Imperial service, the clones that would become Purge Troopers were organized into an expendable death squad intended to hunt down and kill any surviving Jedi. They would be placed under the command of the Inquisitors and served as infantry support for the Inquisitorius.

Every member was equipped with black armor that included several red or silver designs, kamas, and black helmets similar to that of clone paratroopers, with some sections of red. At least three members were also equipped with red pauldrons and at least three other members had a black pauldron with red lining, which was worn on their right shoulder. Each member had the Imperial crest on both shoulder pads.

They utilized DC-15 blaster rifles and electrostaffs in combat.

Purge Troopers were the last clones created from the genetic template of Jango Fett. 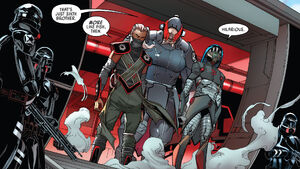 Members of the Inquisitorius were dispatched to Mon Cala along with a squad of Purge Troopers. 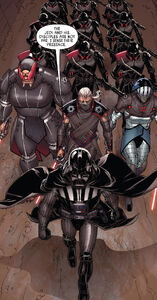 Vader leads the Inquisitors and Purge Troopers through Bel City. 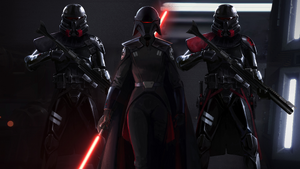 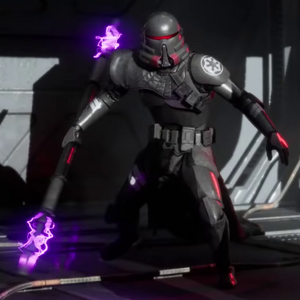 A Purge trooper with an electro-staff. 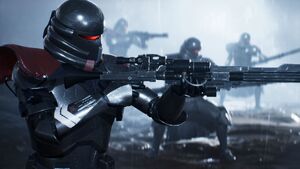 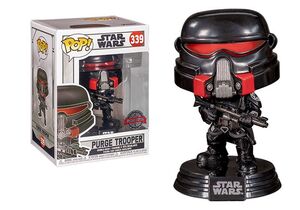