Kidnap Clementine and keep her for itself (failed)

The Purple Orange (also known as simply The Monster) is the Fictional Fictional main villain of the Arthur episode "Rhyme for Your Life" that appears in Binky Barnes' dream. It is a monster created by Dr. Rhymenstein that was originally intended to be good, but a mistake he made in its creation process caused it to become evil instead.

The Purple Orange, true to its name, is a giant anthropomorphic purple orange with arms and legs. It has large, evil-looking eyes with indigo pupils and pale yellow sclerae, a large mouth outlined with sharp fangs, and clawed hands and feet. Its arms and legs are a lighter shade of purple than its body.

The Purple Orange appeared to be a ferocious creature with a taste for eating other living beings, as shown when it ate its own creator Dr. Rhymenstein and rubbed its belly in satisfaction afterwards. Despite this however, it did seem to genuinely care about Dr. Rhymenstein's daughter Clementine, as it referred to her as a friend, and kidnapped her with the goal of keeping her as company rather than eating her. Also, right before Binky's final confrontation with it, it was shown feeding fish to seals in the arctic, showing that despite its ferocious nature, it was still capable of at least some level of kindness. It also didn't seem to know how to speak very well, as the only thing it said other than roaring ("You friend" to Clementine before kidnapping her) was grammatically incorrect.

The Purple Orange appears in a dream had by Binky about himself being in a far-away land called Verseburg in the episode when he falls asleep on the couch after trying to come up with a poem for his mother's birthday. Its first appearance is when it moves aside some nearby tree branches when Binky and Clementine are walking up the path to Dr. Rhymenstein's mansion, although at this point only its hands are shown to the viewer. The Purple Orange makes its first full appearance in the next scene inside Rhymenstein's mansion when it busts through the mansion's wall, eats Dr. Rhymenstein, and kidnaps his daughter Clementine to have as a friend. After going to the Verseburg police station and attempting to report the monster to Officer Fern Walters and being jailed for insufficient poetry (which is a class D felony in Verseburg) as a result, but escaping with the help of fellow prisoner William Carlos Williams, he goes on a long journey across Verseburg in search of Clementine and the Purple Orange, until he finally finds them in the arctic, where the Purple Orange has made an igloo for Clementine to live in and is shown feeding fish to seals. When Binky announces his arrival to Clementine, he gets the Purple Orange's attention, and it approaches him with the intention of eating him. However, Binky uses a yell called the "barbaric yawp" (which was apparently taught to him by Walt Whitman off-screen) to trigger an avalanche which crushes the Purple Orange, killing it. Afterwards, Binky and Clementine return to Verseburg, where the Purple Orange's dead body is on display in the town square, having had the orange juice squeezed out of it for the townsfolk to drink, as Officer Walters gives Binky a barracuda that was caught by Verseburg's founder Pablo Neruda as a reward for killing the Purple Orange and setting the town free, while the townsfolk cheer for him. Binky then wakes up from his dream. 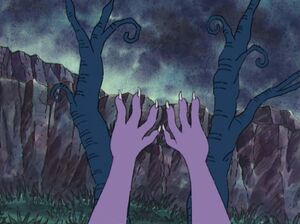 The Purple Orange's first appearance, with only its hands seen. 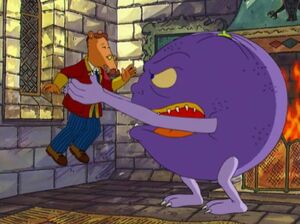 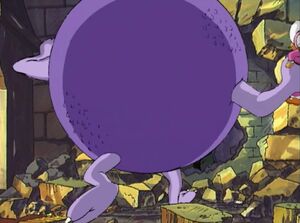 The Purple Orange runs away with Clementine. 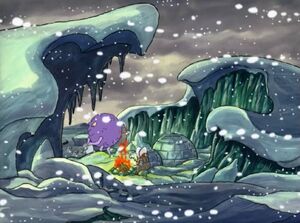 The Purple Orange's hideaway in an arctic area. The Purple Orange feeding fish to seals at its hideaway. 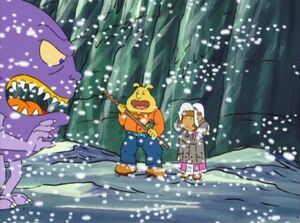 The Purple Orange approaches Binky and Clementine with the intent to eat the former. 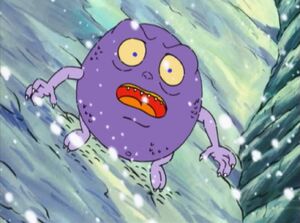 The Purple Orange about to be crushed to death by an avalanche triggered by Binky's "barbaric yawp". 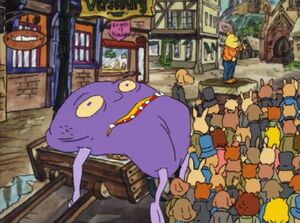 The Purple Orange's dead body on display in the town square of Verseburg, having had its juices squeezed out to make orange juice for the townsfolk.
Add a photo to this gallery

Retrieved from "https://villains.fandom.com/wiki/Purple_Orange?oldid=4237004"
Community content is available under CC-BY-SA unless otherwise noted.