Pussy Galore is a major antagonist (later anti-hero) of the 1964 James Bond film Goldfinger. She was Auric Goldfinger's personal pilot who served as the leader of her aviator team called the Flying Circus before being persuaded by Bond to turn against her employer.

She was portrayed by Honor Blackman.

In the novel, Galore was the only woman in America that runs a cat burglar gang called "Pussy Galore and her Acrobats", She was also revealed to be a lesbian until she falls in love with Bond.

She and her gang were enlisted by Goldfinger to aid in "Operation Grand Slam," an operation that would rob the U.S. gold bullion depository at Fort Knox of fifteen billion in gold bullion. However, she quits the job as she escapes with Bond after he kills Goldfinger and his henchman Oddjob.

In the film, Galore is Goldfinger's personal pilot and commander of the Flying Cirus. Her main objective in the film is to have her flying circus dispense an airborne nerve gas over Fort Knox so that Goldfinger and his communist Chinese allies can break into the U.S. gold bullion depository at Fort Knox, Kentucky and detonate a nuclear weapon (created by Mr. Ling).

However, James Bond seduced Galore, convincing to abort her involvement in Goldfinger's plan. To that end, she had the Flying Circus to switch the nerve gas with a more harmless one while secretly alerting the U.S. government about Goldfinger's plot, thus allowing the U.S. Army to close in around Goldfinger and stop his operation.

Galore is last seen piloting Bond's plane until it was hijacked by Goldfinger, who intends to finish off both Bond and Galore. However, Goldfinger accidentally, shatters a window after a brief fight against Bond, causing him to be sucked out to his death while Bond and Galore escape by parachute. 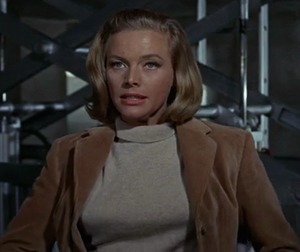 Retrieved from "https://villains.fandom.com/wiki/Pussy_Galore?oldid=2964472"
Community content is available under CC-BY-SA unless otherwise noted.