Putna is the secondary antagonist of the 2012 Hindi Flash-animated film Krishna Aur Kans.

She was voiced by Sulakshana Khatri.

During one night in the underworld, Putna was interrupted from sacrificing one demon when Emperor Kans called upon her. When she arrived at the palace, Kans explained that his nephew Krishna, who was fortold to kill him, had been born, and requested that Putna kill him.

Putna refused, insulted that Kans would send her off to only kill one child. She explained that she'd only agree if she were allowed to kill hundreds to thousands of children, a request Kans gave in to, demanding that Putna murder every baby boy born within the last ten days.

Putna gleefully set about to accomplish this, committing a mass infanticide throughout the kingdom. As she scoured the land, the infant Krishna called out to Putna, attracting her to him. Recognizing him as the prophecy child, Putna disguised herself as a human lady and entered the homestead, where she offered to feed Krishna. Putna then began to feed Krishna her poisoned breast milk. However, Krishna instead sucked out Putna's life force, killing her.

She is probably one of the most wicked of the demons Kans sends to take out Krishna and is a sadistic, witch-like demon whose vile deeds involve kidnapping children and feeding them poisoned breast milk.

She had some involvement in Kans' past, as the two appeared to have known each other. Putna resided in the underworld with the other demons, where she functioned as a dancer and entertainer. Putna was known to have "sent men to terrible deaths", and had a particular predilection for killing hundreds of thousands of children.

This is seen when Kans asked her to find and kill Krishna, Putna refusing the offer unless Kans would allow her to slaughter hundred of thousands babies. This element makes her stand out among the others demons summoned by the emperor who only try to kill Krishna because instead of doing her task, she goes out of her way to be as cruel as possible. 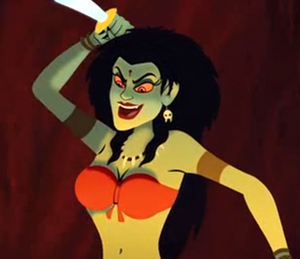 Putna about to strike. 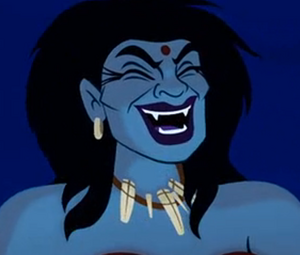 Putna in her giant form.

Putna about to capture an infant. 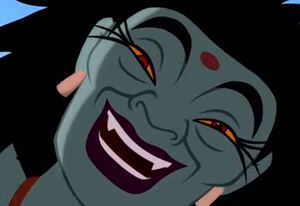 Putna laughing as she finds Krishna. 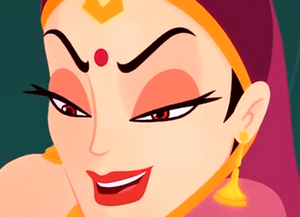 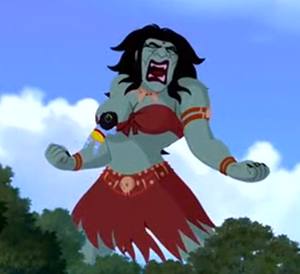 Putna screaming as Krishna overpowers her. 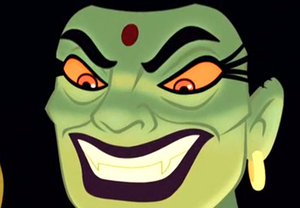 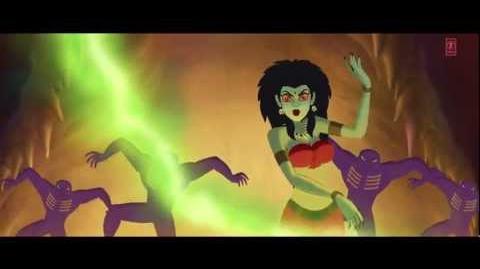