Kill the Power Rangers and destroy their Zords. (failed)

Evil Minions
The Putty Patrollers are the standard army units deployed by Rita Repulsa during the first season of Mighty Morphin Power Rangers. Though neither particularly strong, intelligent, nor resilient, their basic power of numbers allow them to be a regular challenge to the Power Rangers. This variety of Putties can be seen in Power Rangers: Super Legends.

The Putty Patrollers appear as supporting antagonists in the 2017 reboot, redesigned as stone golems voiced by Fred Tatasciore (who also voices Goldar).

Putties are created in Finster's monster making machine. Though apparently made from the same basic clay or putty-like compound as the specialized creations, they differ from normal monsters in that they are mass-produced through use of steam-pressured molds and then sent through the monster machine in large numbers. After being fully cooked, they're ejected one at a time from the exit tube at the far end of the machine.

Putties are created by Rita Repulsa's earth powers from any earthen materials such as rocks, sands, concretes, etc. As these materials coalescing into Putties, other objects that caught within Rita's influence during the creation process often become part of Putties themselves. For instance, some Putties are seen with what appeared to be random objects such as street signs or bikes embedded on their bodies.

Though generally homogeneous and identical, Putties often display some level of individual personality, and are occasionally given number designations to identify them within a given group. Indeed, not all Putties are created equal, as some examples show even less than the typically lacking skill level. Such Putties are usually broken back down into their clay building blocks and recycled for use in other Putties, and perhaps even monsters. Putties do have some manner of spoken language, though it is incomprehensible to humans, coming across as strings of garbled noises, not unlike the sounds of someone trying to speak while underwater (however, they can speak very fluently when disguised as something or someone else, such as the five mutant ranger putties in "Mighty Morphin' Mutants", as well as the old man who sold Zack the earrings in "An Oyster Stew"). They can also drive.

A personality trait that Putty Patroller shared with other main antagonists' foot soldiers whom succeed them are are loyality to their master and willingness to do their master's bidding, even if it includes fighting to death.

In 2017 film, Putties are depicted as bulky, conjoined humanoid stone golems with two to 4 legs, multiple arms, 2 to 3 heads, and two fused torsos back to back which enable them to attack more than two enemies. However, in Power Rangers: Aftershock, they have more humanoid appearance due to animated by Goldar Dust, remnants of Rita's dark powers which still active within scattered pieces of destroyed Putties and Goldar. While they can be destroyed, it appeared that the center of their bodies serves as their achilles heel; Should that mass get struck, they would instantly fall apart.

In personality, they are more or less same with mainstream counterparts, albeit more brutish.

Despite being produced from seemingly standardized molds, there are a number of differences between given Putties. These changes can be as simple as an enlarged, rocky-looking gauntlet, or even large balls (similar in appearance to a small wrecking ball) and rock-like swords.

In some instances, Putties are seen wearing belts, with large round "buckles". These seemingly have no purpose, as Putties do not in fact wear pants. Finally, one rare variation exists where the entire body has a cragged, rocky appearance, in contrast with the much smoother, refined body of the average Putty. This version is not acknowledged in Mighty Morphin Power Rangers, but in the original Zyuranger, such an individual was the leader of the attack force. Since they only appear in the stock footage from Zyuranger, this function cannot reasonably be assigned to the MMPR application.

These look identical to standard Putty but possess infinite stamina and resilience. They were produced in only one episode. When they ambushed Power Rangers members they took their infinite endurance to full advantage: Power Rangers ultimately run out of their stamina and were forced to flee the area. To kill them a set of special weapons had to be retrieved.

Five Putty Patrollers were given the Badges of Darkness, which contained evil versions of the Ranger powers, turning them into five copies of the six Rangers. Under supervision of Goldar, a group of candidate Putty Patrollers underwent physical tests to prove their worth to receive these powers. However, none were worthy of becoming the Red Mutant Ranger and Goldar destroyed the Red Badge of Darkness. The Pink and Yellow Mutants were destroyed by a shot from the Power Blaster, while the remaining three as well as Commander Crayfish, the stand-in for red Ranger, were destroyed in battle with Ultrazord.

These are Putties loyal to Zedd. 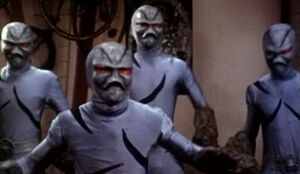