The Ripper
The Drowned Man
Fish-Man Pyke (by Braum)

Kill every crewman of the Terror ship

Pyke, also known as The Bloodharbor Ripper, is a villainous playable character on the multiplayer online battle arena game League of Legends, and is also a minor antagonist-turned-protagonist in The Ruined King.

Formerly a butcher of the infamous Blood Harbor slaughterhouse on Bilgewater, Pyke died in betrayal at the jaws of a sea monster, thanks to his cowardly captain who cut his lifeline. Now a spirit of undeath, Pyke is hungry of vengeance, and indiscriminately hunted every person associated with the bloody business of the slaughter docks.

After the Ruined King's revival, he has since become an antihero, hunting down wraiths and spectres after being judged worthy by the Buhru goddess Nagakabouros.

Being the 141th champion added in the game, Pyke was released on May 31, 2018, and revolutionized the Support role for being the first Assassin type Support of the game, more based on harassing and killing the enemy instead of protecting the carry.

He is voiced by Darien Sills-Evans.

Left alone at a very young age, Pyke was forced to be acquainted fast with the dirty business of the slaughter docks of Bilgewater. All day, every day, monstrous creatures of the deep were hauled in for rendering in the butcheries that lined the waterfront. He found employment on a district known as Blood Harbor, as not even the tides were strong enough to wash away the blood coming from slaughtered sea monsters.

Despite becoming very well acquainted with the work, Pyke was not content with the miserable paycheck butchers from Slaughterhouses got for only turning pieces of monster into chunk, so he decided to turn on a crewman, working on a ship known as Terror, in order to hunt sea monsters for profit and then bring them to the slaughter docks.

Pyke hunted on a very peculiar way, the traditional manner of the Serpent Isles, were his mother was originally from. He launched himself directly to his targets on the water, in other to secure the hooks on the beasts with his bare hands and began butchering the creatures when they were still alive. Highly skilled on this regards, Pyke soon cut a name for himself as "the best harpooner a golden kraken could buy".

Every sea monster on Bilgewater had his own different price, and the most desired of all of them was the jaull-fish. With a maw filled with saphilite, used for magic distillations, the jaull-fish became the most desired hunt on Bilgewater, but also the most difficult. Knowing this, Pyke soon became cocky, and launched to the action at the first jaull-fish he saw. Despite being hooked to the lines through harpoon lines, the beast was far bigger and older than any other encountered on the sea. It looked like another successful hunt for Pyke, but he didn't count that the beast would unleash a painful growl that could be heard on all of Bilgewater. Soon, a complete pod of giant jaulls began to push against the tethered ship’s hull. Fearful, the captain valued more his life rather than the money, and cut Pyke's lifeline in order to escape. The last thing Pyke saw was the horror faces of his crewmates while he was being swallowed alive. But this would not be his demise.

Born of the Ripper

In the deep of the sea, still in the jaull's mouth, Pyke opened his eyes once more. There, he saw visions of everything he lost while others grew fat, blue lights filled his mind and twisted his thoughts, filling him with feelings of vengeance and retribution. Pyke arose from the ocean, transformed in something different he was before, with a new purpose given by the depths: to slaughter those who wronged him.

Back in Bilgewater, no one thought much of the killings at first, for a so dangerous place, usual bodies where no nothing new. But the time passed and the murders kept growing, a pattern began to emerge. Captains from different ships were found horribly mutilated and slaughtered as they were fishes, soon it was the caulkers, the first mates, merchant officers, bankers, anyone associated with the bloody business of the slaughter docks. The people of Bilgewater, desperate and scared, put a price over Pyke's head for bounty hunters, with the exorbitant price of a thousand krakens for the infamous Bloodharbor Ripper, but it was all in vain.

A city, once prideful for hunting monsters now finds itself at the hunt of one, and Pyke has no intentions of stopping.

In game, Pyke is an assassin-type champion, utilizing his high mobility and damage to kill enemies quickly. He can use Bone Skewer to stab or pull enemies, Ghostwater Dive to turn invisible with increased movement speed, and Phantom Undertow to dash to and stun enemies. His passive, Gift of the Drowned Ones, helps him regenerate damage while hidden from enemies, and his ultimate, Death From Below, lets him execute enemies at low health.

Pyke itself has little personality to be spoken of. Being controlled by jaull's fish magic, Pyke sees everyone as guilty of his death despite not being actually on the ship who lead to his demise. Similar to Kalista, Pyke's hunger of vengeance combined with magic turned him on an amoral being with little to no human traits whatsoever, with jaull-fish magic being the malefactor instead of Shadow Isles' mist.

However, through Pyke's interactions with other characters in-game, we can see that Pyke has absolutely no problem working with team mates if the situation requires, despite working alone all the time, being somewhat affably at his own way and even being equitative to the ones who help him.

Pyke in his trailer.

Pyke's artwork in Legends of Runeterra.

Pyke's levelled up form in Legends of Runeterra.

Pyke as he appears in The Ruined King. 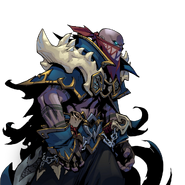 A render of Pyke in The Ruined King.