Killing and raping other monsters.

Punish James Sunderland for the sins he committed.

Pyramid Head, also known as Triangle Head in Japanese or The Bogeyman, is a fictional monster and recurring antagonist from the Silent Hill video game series, introduced in the second installment, Silent Hill 2, as one of the two main antagonists. There it serves as a symbol of the protagonist's repressed guilt and anger over murdering his wife. He has since appeared in subsequent series entries as the main antagonist and featured as a minor albeit important antagonist in Silent Hill: Homecoming.

In the Silent Hill mythos overall, Pyramid Head is a manifestation of a person's desire to be punished for their misdeeds. He is the judge, jury and executioner for the mysterious dark powers of the town. While his actions are cruel and horrific, he is a driving force for someone to come to terms with what they've done, albeit in the most brutal manner possible. He is related to the being Valtiel, but this relationship has been kept vague.

Of the creatures that appear in Silent Hill 2, Pyramid Head is one of the few that is overtly masculine in appearance, whereas the other monsters generally have feminine features to them, with the exception the Abstract Daddy. Pyramid Head resembles a pale, muscular man covered with a white, blood-soaked robe reminiscent of a butcher's smock.

His most outstanding feature is a large, red, triangular helmet that covers his head completely. It was reportedly designed to appear painful to wear, suggesting that it serves as some kind of punishment. In interviews with the chief artist responsible for creating the character, it is stated that the initial thought process behind the pyramid-shaped helm was to create an iconography of "pain". In other accounts, the helmet has been described as an elaborate executioner's mask.

Like the Nurses in the game, Pyramid Head wears plain white gloves with partially connected fingers, either to conserve polygons or for a unique effect. Early designs show him with a strange tattoo on his left shoulder, but this does not appear in the game. Pyramid Head is usually armed either with the Great Knife or a lightweight spear.

However, he can also attack with a strangle grip, during which a black tongue-like protrusion "stabs". Similar to an attack used by other creatures in the game.

He can also perform a headbutt which can cause an instant death. Lastly, he can use an extremely slow overhead chop with the Great Knife, which also causes instant death (except in Easy Mode). Pyramid Head does not speak, but grunts and moans painfully inside the helmet - his breath hisses through the helmet grilles. His actions display shocking brutality as shown during the game in two separate scenes: he sexually assaults and violently kills two Mannequins and a Lying Figure. In all of his appearances, Pyramid Head punishes his victims in extremely painful and violent manners both physically and mentally.

Throughout the game, Pyramid Head is a tenacious antagonist who follows James through Silent Hill for an unknown reason. Unknown to James, Pyramid Head is a physical manifestation of his guilt over his wife Mary's death. James first encountered Pyramid Head in Wood Side Apartments in a dark corridor on the second floor.

Although Pyramid Head carried an executioner blade, iron bars prevented him from reaching James and killing him. Seeing no other option, Pyramid Head watched James enter the room next door. When James left the room and reentered the corridor, Pyramid Head had vanished into the darkness. James later encountered Pyramid Head a second time when he was attacking two mannequins in one of the apartments and killed both of them and James hid in a closet.

After killing the mannequins, Pyramid Head noticed James in the closet and moved towards the closet to kill him, but James was frightened and pulled out a pistol and shot Pyramid Head multiple times in the helmet. Pyramid Head shrieked in pain and staggered out of the room and retreated. Later, Pyramid Head encountered James for a third time in Blue Creek Apartments' staircase assaulting a Lying Figure, where he attacked James with his giant knife.

James tried to escape, but the door was locked. Pyramid Head attempted to kill James, but James used his gun to fend off Pyramid Head. A siren outside the building urged Pyramid Head to leave the apartment building allowing James to escape. Later, Pyramid Head encountered James again in a fenced rooftop of Brookhaven Hospital. James was heading back to the staircase door to depart downstairs, but Pyramid Head moved in from behind and struck James down with his knife, sent him into the fence, which broke off and sent James falling into the darkness one floor below, while Pyramid Head watched from above.

Later, Pyramid Head went to the basement of the hospital and found James, who survived the fall, and a woman who resembled his wife Mary named Maria. Pyramid Head chased the duo through the basement. James finally made it to the elevator, but the doors closed allowing Pyramid Head to catch up and stabbed Maria with a spear, killing her, but James was able to flee again, leaving him depressed that Pyramid Head killed Maria. Later, James found a painting in Silent Hill Historical Society, which depicted Pyramid Head with a spear with mutilated corpses hanging upside down in the background with inscription "Misty Days, Remains of Judgement", to which James thinks "it's him."

Deep in the Labyrinth beneath the Toluca Prison, James could encounter Pyramid Head twice in the two looped corridors calmly patrolling them. James could also obtain Pyramid Head's Great Knife in his room which contains several cages and hanged bodies.

At the very end after James watched the video tape in Room 312 of Lakeview Hotel, he went through a delapitated and burned down version of the hotel until he reached the main lobby. There James saw two Pyramid Heads torturing Maria and killing her for another time. At this time James realized what he has done and he needed someone to punish him for his sins, explaining the origin of Pyramid Head. After his words, Pyramid Heads became vulnerable and after a long fight, they both commited suicide by stabbing themselves with their spears as James didn't need them anymore.

As revealed throughout the game, Pyramid Head's appearance was a variation of the outfits of the executioners from times past, who wore red hoods and ceremonial robes to make themselves similar to Valtiel, an "angel" of Silent Hill. Pyramid Head was created from "the townspeople's idolatrous ideologies".

Pyramid Head also shares traits with Valtiel, such as similar gloves, cloth stitching, and following the protagonist of the game. According to documents created for the release of Silent Hill 4: The Room, a sect of the Silent Hill cult (the "Valtiel Sect") wore the executioner's costume depicted in Silent Hill 2.

In Silent Hill 2, Pyramid Head serves as a symbol of the repressed anger and guilt of the protagonist, James. Pyramid Head functions as both an executioner of Maria, and the constant tormentor and punisher of James. The fact that he's seen molesting various monsters could be symbolic to James Sunderland's sexual frustration, seeing that James' wife has been deceased for 3 years.

Pyramid Head appears in the 2006 film Silent Hill and its 2012 sequel Silent Hill: Revelation, listed in the credits as "Red Pyramid".

In the films, Pyramid Head's design is noticeably different from that which is depicted in the games. Christophe Gans, the director of the first film, noted that despite the name, Pyramid Head's helmet is actually "a basin and not a triangle at all". Apparently, "it was impossible to make an authentic replica of the shape and actually have a real person to move under it.".

Pyramid Head's "very deformed body" in the game was also altered into a "tall, powerful character a little like the Warrior God in Stargate". Gans has also stated that Pyramid Head's appearance is conjured from a female perspective.

In both films, he was portrayed by Roberto Campanella.

Throughout the film, Pyramid Head appears only two times and is hostile to both Rose and Cybil as well The Brethren. He was created by Alessa to punish the cultists for what they have done to her. In Silent Hill, Pyramid Head acts as a tenacious antagonist and is first encountered by Rose Da Silva in the Otherworld version of Midwich Elementary School Courtyard while looking for her daughter Sharon. After Rose fell through the window to the school's courtard Pyramid Head appeared from the door next to her with a huge swarm of Creepers. Rose quickly run away into the building but was overwhelmed when the Creepers advanced to her from both sides. After being rescued by a police officer named Cybil Bennett, the two women hide in a janitor's closet and narrowly avoid attacks by Pyramid Head, who attempts to impale them with his Great Knife. Pyramid Head departs when the darkness is lifted but reappears later on when Rose, Cybil, and Anna are about to enter the church of Anna's fellow devoted believers presided over by a religious zealot named Christabella.

As Anna throws stones at Dahlia Gillespie, the mother of Alessa, the darkness falls once again and she is grabbed from behind by Pyramid Head. Rose and Cybil then watch in horror as the monster grabs Anna by her neck and carries her up the stairs. Then he lifts her into the air, skins her alive and then throws her skin at the church doors.

In Silent Hill: Revelation, Pyramid Head appears more as a protective force and is even mentioned by Heather Mason as the protector and assassin of Alessa. Pyramid Head can be seen operating the carousel at Lakeside Amusement Park and he also helps Heather on a few occasions, since Heather is the manifestation of the good side of Alessa's soul. The first example of this is when Heather is being grabbed by prisoners in Brookhaven Asylum - Pyramid Head appears in a corridor and slices off the prisoners' arms so they cannot harm Heather.

Pyramid Head makes an appearance in Krazy Kart Racing as a playable character representing the Silent Hill series along with Robbie the Rabbit.

Pyramid Head appears as an unlockable character in New International Track & Field. He can be unlocked by obtaining at least bronze in every event in the Single Event mode. The game also mentions that he went on "a brief but enjoyable killing spree" in Hollywood, a reference to his film appearance.

Before its closure, Pyramid Head appeared as a purchase-able costume in PlayStation Home. He could be bought with or without his signature weapon.

Pyramid Head appears as a playable Bomber in Super Bomberman R. In the story mode for the Grand Prix mode, he appears to the Bomberman Brothers along with Dracula and Anubis to judge their strength.

Under the name The Executioner, Pyramid Head appears as a playable killer in Dead by Daylight, being first introduced in "Chapter XVI: Silent Hill". His abilities allow him to torment survivors, trap them in cages, and attack them from a long distance with a large shockwave. 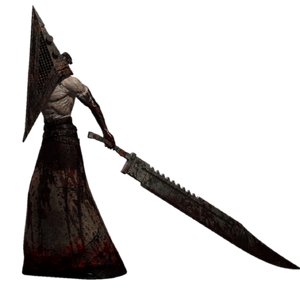 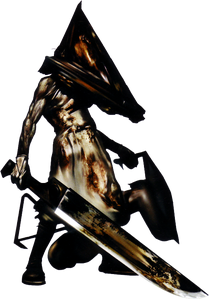 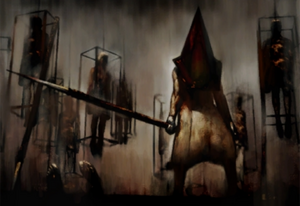