Spreading joy and happiness (in their own mind).

Spread "happiness" anywhere they go (failed in reality, succeeded in their mind).

The Pyro is one of the playable character classes in the video game Team Fortress 2. They are a mysterious, mumbling, masked pyromaniac wielding a flamethrower. However, despite being a mercenary and an having an affinity for fire, the Pyro is actually unaware of the death and destruction they are spreading; the Pyro sees their own weapons as innocent items such as lollipops, bubble blowers and rainbow throwers when, in reality, they are deadly axes, flare guns and flamethrowers. They believe that they are spreading color and happiness, but are actually causing mass destruction and bloodshed.

Unlike all the other classes, which have an established place of origin, with the inclusion of some classes having their past and real names revealed, the Pyro's true appearance, real name and location of origin are never revealed. The Pyro's mystery is their most prominent trait, sparking many debates and theories from fans.

They were voiced by Dennis Bateman, who also voices the Spy in the same game.

The Pyro specializes in fighting enemies at close range using a homemade Flamethrower. Enemies set on fire suffer from afterburn and take additional damage-over-time, allowing the Pyro to excel at hit-and-run tactics. Due to the Flamethrower's short-range, the Pyro is weaker at longer ranges and relies heavily on ambushing, taking alternate routes to catch opponents off-guard. The Pyro wears an asbestos-lined suit that provides protection from the afterburn from enemy Pyros.

According to "Meet the Pyro", the Pyro imagines that they are in a marvelous and happy world known as "Pyroland" where their 'enemies' are cheerful, chubby cherubs.

Although categorized as an offensive class, the Pyro brings a few sources of utility to the battlefield. The Pyro's compression blast, for example, can reflect enemy projectiles, extinguish burning teammates, and forcibly reposition any enemy, even one under the effects of an ÜberCharge. With high health and average movement speed, the Pyro is devastating against any class in close combat.

Because enemies hit by fire are visibly ignited, the Pyro is the best class for Spy-checking, as even a small puff of flame can nullify the Spy's Cloak and disguise. Additionally, the Pyro can use the Homewrecker/Neon Annihilator to protect an Engineer's buildings from enemy Spies or use the Detonator to jump to normally unreachable places. 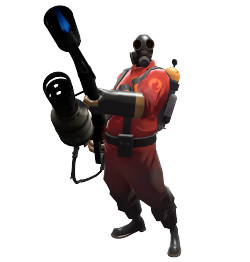 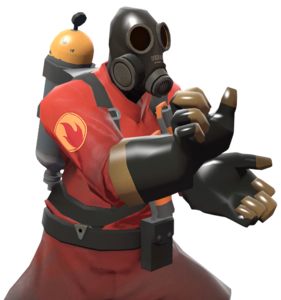 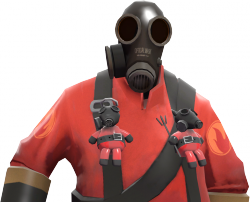 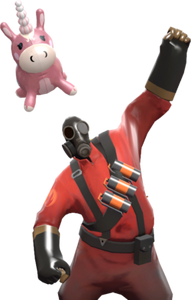 The Pyro with the Balloonicorn. 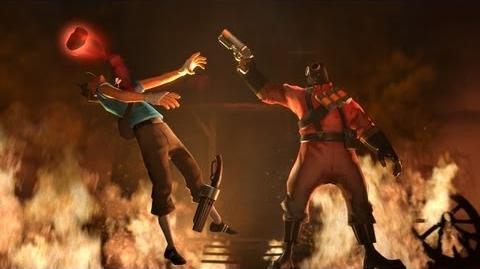 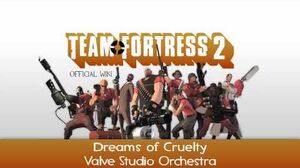 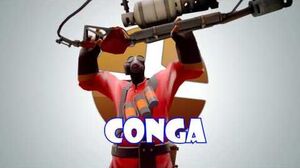