NOTE: This article is about the incarnation of Pyro from the X-Men film series. The mainstream version can be found here: Pyro (Marvel).

Member of the Brotherhood of Mutants (original timeline)

Aid the Brotherhood of Mutants in their goals in cementing mutant supremacy.

He is a mutant with the power to control fire, though he can not actually project it from his body, so he uses a lighter and later flamethrowers. Originally a student at Professor Xavier's school, Pyro would join the Brotherhood of Mutants after being convinced so by their leader, Magneto. He would assist Magneto in trying to make mutant kind dominant over mankind, but would fail after being defeated by his former friend turned rival, Iceman.

He was portrayed by Alexander Burton in X-Men, and later on by Aaron Stanford in the following sequels.

John Allerdyce was born a mutant, which gave him the ability to manipulate fire but would have to need an external source to do so (e.g. the ignition of his zippo lighter). At some point during his youth, John became a student at Xavier's School for Gifted Youngsters, where he was taught on learning how to control his powers.

Pyro first appeared when he tried to impressed a young mutant girl named Rogue with a fireball, only for Bobby Drake (also known as Iceman) to foil it by freezing the ball and causing it to shatter. This puts Pyro in trouble with Storm, much to his anger.

Pyro escaped along with many of the students when William Stryker and his men stormed the X-School, though most of the students are captured. As such, the X-Men are forced to team up with the Brotherhood of Mutants (led by Magneto to stop Stryker from wiping out all mutantkind. In the end, Pyro decided that he's better off with the Brotherhood and escapes with with them following Stryker's death.

In the film, Pyro helped Magneto fight against the cure and X-Men where Iceman defeated him. Pyro advocated total domination over non-mutants as a relentless foe. Becoming a bitter rival of Iceman, Pyro engages into a fight against him, but ends up being beaten.

In the Rogue Cut, Pryo's Zippo Lighter is seen among the tributes of Mutants that had been killed by the Sentinels in 2023, it is likely that Pyro was killed. However, it's assumed that he is alive in the revised timeline after the original was altered by Wolverine and Mystique. Due to the changing of the timeline, it's also possible that Pyro never joined the Brotherhood since Mystique didn't join Magneto after stopping the assassination on president Richard Nixon.

Pyro's zippo lighter among the tributes to the deceased mutants. 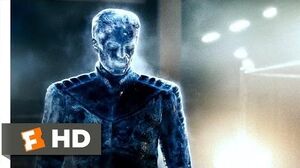