Military Assassin
Python was a former comrade of Naked Snake that fought with him in the Vietnam War and a villain from Metal Gear Solid: Portable Ops.

Python fought alongside Naked Snake during the Vietnam War. When the Boss disappeared, Python thought of Snake as the only other person he could count on in combat. But during a secret mission in Vietnam, he was badly wounded and lost his ability to regulate his body temperature. Snake believed that Python was dead, since, unless he received intense medical care, he would just overheat and burn up. However Python was recovered by the American government, undergoing surgery that equipped him with a special cooling suit full of liquid nitrogen. He also received metal shunts in his skull that could relieve him of excess heat.

After Python fully recovered, he underwent training from the CIA to become the first of the “Anti-Snake” soldiers. He was genetically altered and trained to match Snake perfectly, thus the American government would be prepared in the event that Snake, now Big Boss, turned on them. Later on, Python was made a part of the FOX unit and because of his brainwashing and modifications, he’d became obsessed with matching Big Boss perfectly. To keep him sharp, Python was sent on regular assassinations, but the killing left him with nightmares of his victims and increasing his determination to take out Snake.

After FOX took over the San Hieronymo Peninsula in 1970, Python was ordered by Lt. Cunningham to lead the search for Big Boss and Roy Campbell. Python showed up at the harbor after hearing there were intruders in the area and search a docked cargo ship, hoping to locate Big Boss aboard. However Python only found Colonel Skowronski, ex-commanding officer of San Hieronymo, Python taunted Skowronski, who shot at him, but the bullets did nothing and the ex-colonel called him a monster. Python decided he wasn’t worth killing, locking him in a nearby cell and freezing the lock, but only enough that it would thaw before Skowronski died of starvation. Eventually Python faced off against Big Boss, after he tried to destroy the cargo elevator in the facility used to store warheads. Python froze the detonator of the planted dynamite, explaining to Big Boss and his comrades that he’d in fact saved them. The facility’s walls were more fragile than they seemed, so the explosion would have stopped them from escaping.

Python explained why he wanted to kill Big Boss and said he joined Gene’s rebellion to save himself. Python fought Big Boss, who eventually managed to beat his former war buddy and Python advised Big Boss on how to lead his soldiers. He said that soldiers didn’t need redemption or hatred to fight, rather they needed someone to look up to. Python warned Big Boss that if he didn’t hold the burden of the fact that their lives depended on him, he would never defeat Gene.

Python’s suit allows him to freeze objects around him by releasing the liquid nitrogen inside of him into the environment. However doing so makes him lose some of his cooling agent and making his body heat up. Python is a skilled marksman, particularly when using an assault rifle and his suit protects him from bullets, as well as hand-to-hand combat attacks. 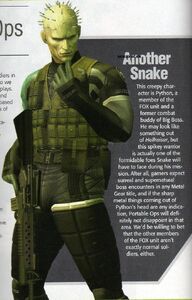