Member of the Council of the Six (former)

Investigating and discovering more about the powers of the Eliacube (formerly).

Plan their revenge against Phaeris for devouring his arm.
Collecting and experimenting with extinct specimens of his planet.
Progress the Eliatrope's science.

Steal Orgonax's heart and create the Eliacube (succeeded).
Initiate a war between Mechasms and Eliatropes (succeeded).
Make a deal with Rushu to destroyed Phaeris (abandoned).
Invade the Crimson Claw archipielago to steal the Shinonome Egg and opening portal with Eliacube power, bringing back his sister, next to his race.
Send Yugo to the Blank Dimension and be the new king of Eliatropes, in process to destroy The World of Twelve then absorbing Wakfu of the planet to power his ship, so he can continue to explore (all-failed).

Qilby is the main antagonist in the second season of the French animated series Wakfu. he is an elderly Eliatrope of the Primordial Age and a member of the Council of the Six, is considered the grandfatherly figure with considerable knowledge of wakfu energy, and the brother of Shinonome. However, he seems troubled about something from his past; unlike the other members of the council, Qilby does not forget its memories when reviving. Also knowing Orgonax's heart thief, Qilby was the Eliatrope that unleashed the end of his civilization and Pháeris ripped an arm because it was the cause of the Invasion. He was ultimately imprisoned in the Blank Dimension by Yugo.

Qilby was one of the first generation of Eliatropes and one of the few adult ones seen in the animated series, initially showing compassion and a desire to bring his people back from their prison/sanctuary. However, he later shows his darker side after fusing with the cube (either the effects of it or his true self). He is extremely diabolical, manipulative, conniving, amoral, sly, and possibly insane because his reincarnations never lost their memories, unlike his brothers and sisters. He provoked a war that nearly destroyed his race, set loose a demon invasion and wanted to absorb the wakfu of an entire world to power his ship, though he seems to not care for the consequences. In the end, his greatest fear was to end up alone as evidence when he showed he was afraid of being trapped in the White Dimension again.

Qilby is a tall, slim man. His has long brownish-blonde hair accompanied by a beard tied up to keep it well-kept. On his face, he has golden eyes and has brown-framed monocle-shaped glasses adorning it. He previously had two arms, but lost his left from Phearis during the war against his people and the Mechasms due to his treachery that started it all to begin with. Like all Eliatropes, Qilby wears a defined hat with noticeable extensions that appear more like dragon horns than ears of some kind. His attire consists of a white shirt with long sleeves, a pair of baggy brown pants, and sandal-like shoes.

While possessing the Eliacube, his appearance changes entirely. His skin apparently becomes ghostly white. His hair turns black along with his beard not being tied up, but rather kept straight. His sclera and irises turn as luminescent blue as the color of wakfu itself. Black markings also adorn his body, including his hat while his lips appear blue. Speaking of his hat, the horn-like extensions of it stand up straight and the string bindings of the horn-extensions broke during his transformation, indicating his Eliatrope wings underneath have changed. His black hair now hangs out from the torn opening in the back. He no longer has a shirt on to cover his upper-torso or his sandal-like shoes. His pants turn from brown to white also. Finally, he has the Eliacube in the shape of a makeshift arm to replace the one he lost.

After Qilby's Eliatrope arm is severed, his body mostly reverts to his original appearance, with his hair is now a paler, straw-like colour and his lips remain blue. He also, despite his Eliacube arm regaining its original cube form, still has a short stub of the arm attached to his torso.

Qilby has all of the same powers as Yugo though many of them are more advanced versions. One particular trait about

Eliatropes was their "immortality" of sorts. Even when after they die, they were simply reborn from their ashes, much like phoenixes. Different incarnations, new memories, same soul. This was why they were such an effective race. As well as an assortment of other Wakfu abilities (including the ability to summon a scythe made of the stuff), he also has full knowledge of the Eliacube and its workings (Nox spent 200 years just trying to figure out how to work it) makes him even more dangerous than Nox, he is also able to remember his past lives, which is unique for his species, and implied to be the source of his thirst for knowledge and madness, which he later stated was a curse. 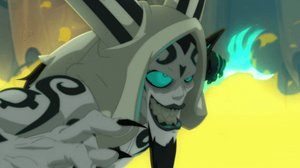 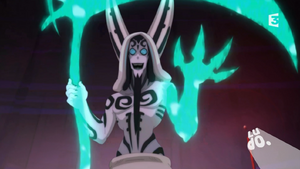 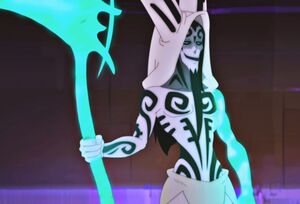 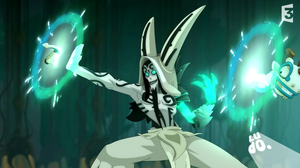 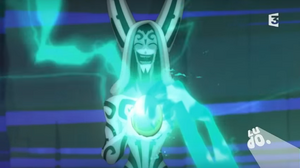 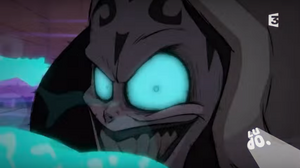 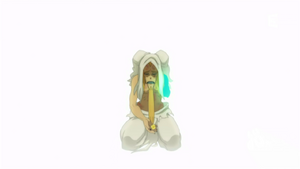 Qilby trapped again in the Blank Dimmension for the eternity. 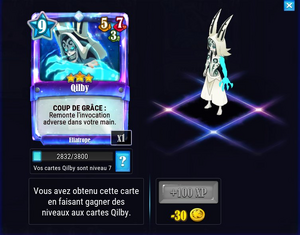 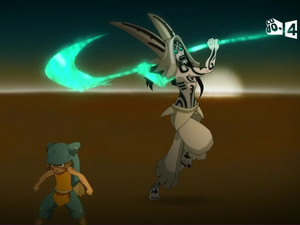 Qilby attacking Yugo in his mind from the Season 3. 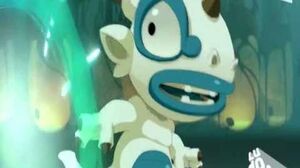 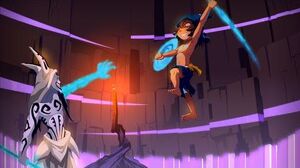