Empress of the Elements

Become the ruler of Ixaocan

Unify Ixtal under one empire

Qiyana Yunalai, simply known as Qiyana or Empress of the Elements, is a villainous playable character in the multiplayer online battle arena game League of Legends. The egotistical princess of Ixaocan, Qiyana hopes to claim what she sees as her rightful place at the throne so she could unify all of Ixtal under her banner.

The 145th champion added to the game, Qiyana was released on June 28, 2019, and is most commonly played in the mid lane.

She is voiced by Montse Hernandez.

Qiyana was born to the ruling family of Ixaocan, a city-state located deep in the Ixtal jungles. Born the youngest child with older nine sisters, Qiyana grew up never expecting to inherit the high seat of the Yun Tal, and her sisters always received a higher amount of love and attention from her parents than she did. As she grew older, Qiyana sought out new ways to prove herself and began to study the ancient elemental arts, a magic that had been passed down in Ixtal for generations. Few could master such magic, but Qiyana was one of the most talented students in all of Ixaocan, surpassing her sisters' skills and mastering the advanced techniques within weeks.

Ritual Combat for the Throne

As Qiyana's skills grew, so did her resentment towards her family. She grew to see herself as superior to her sisters in all respects, not understanding why her parents wasted so much time training such weak elementalists. Qiyana picked fights with her siblings at every opportunity to prove her mettle, until one day, her eldest sister and heir to the throne, Inessa, gave in to Qiyana's demands for a duel. Only the strongest would rule Ixaocan, and Qiyana wished to seize the place as heir. Inessa hoped to teach her sister humility and respect, but when their battle had finished, Qiyana stood victorious over her battered and broken sister, who would never be able to walk again.

Qiyana's victory in the duel meant Qiyana had become the new heir to the throne, but furious at what she had done, Qiyana's parents revoked the prize. She would remain tenth in line behind her sisters. Qiyana was bitter about their decision, but didn't care much, for she didn't need her parents' approval anyway. She had successfully proven her superiority to all of Ixaocan, and her ruthless talent was respected by people across the city.

Slaughter of the Piltovan Miners

However, Qiyana was not satisfied with recognition from all of Ixaocan. She needed the entire world to know the strength of her city, and more importantly, herself. Qiyana was disgusted by the increasing number of foreign visitors coming to their jungles to drain the land of its natural resources. She believed that if she showed them Ixtal's elemental might, these foreigners would run away in terror, and in her parents' court she proposed a plan of action against the "outlanders".

Qiyana's parents did not approve, of course, stating that making contact with the miners could destroy Ixacoan's hidden, isolationist position in Runeterra, inviting war, disease, and hatred, putting hundreds of years of peace in jeopardy. But Qiyana didn't care what they had to say and disobeyed her parents' orders, raiding a Piltovan mining site, destroying it and killing all the workers but one. She let the last miner go, and told him to spread the message of the elementalist who destroyed the mine. When she returned, Qiyana told everyone about the massacre, much to her parents' fury, as Qiyana's actions only caused the Piltovans to send even more miners and soldiers to the jungle.

The Ixaocan princess was imprisoned for her insubordination, but elementalists in the high court spoke on Qiyana's behalf, stating that while her actions were reckless she was one of the most powerful elementalists Ixaocan had ever known. It would be foolish to keep her locked up, and she should instead be appointed to defend the city. On top of that, the city was full of people who admired Qiyana's talents, and she could inspire them to greatness. Reluctantly, Qiyana's parents released her on the condition that she swear to never disobey orders or make contact with the outlanders again.

Qiyana made her oath of fealty to her parents, but she won't let tradition or rules get in her way. The Empress of Elements secretly conspires behind her parents' backs, vowing to climb the ladder of succession by any means necessary until she becomes Ixaocan's new ruler. And when she takes Ixaocan for herself, she will form a glorious empire to encompass all of Ixtal, and all of Runeterra would bow before the grand elementalist.

In game, Qiyana is an assassin-type character, using high mobility and damage to attack high value targets. Her passive, Royal Privilege, has her first basic attack against each enemy deal bonus damage. Qiyana can also use Edge of Ixtal to swing her ohmlatl in a line to deal physical damage, or she can power up this ability to become Elemental Wrath, using the elemental powers of Brush, River, and Terrain to gain different effects. Qiyana can swap between elements using Terrashape, which also dashes her to a target location, or alternatively, she can dash and slash with Audacity without changing her element. Qiyana's ultimate, a Supreme Display of Talent, creates an elemental shockwave that reacts to the type of terrain it travels across, stunning and damaging enemies in the vicinity.

Egotistical and aggressive, Qiyana is a self-centered royal who thinks her elementalist talents make her the best at everything. This delusional mindset also grants Qiyana the belief that she alone has the undeniable right to be supreme ruler of the entire world, and conspires to achieve this goal by any means necessary.

Qiyana cares little for her own family, and will gladly trample them over to get what she wants. When her older sister challenged her to a duel, Qiyana injured her so badly that she was permanently paralyzed, and showed little remorse for her own actions. Qiyana also murdered the Piltovan miners with glee, showing no mercy except for one man, and even this was just so he could send a message to Piltover not to return. This building of her own reputation could be a ruthless method to secure her nation's borders, or it could just be more evidence of Qiyana's constant need for self-aggrandizement. Whatever the case, the Ixaocan princess displays a remarkable amount of cunning and ambition, which goes to show she is not to be trifled with.

Qiyana in "Fit to Rule". 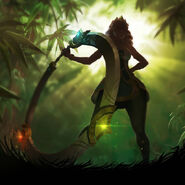 Qiyana in her champion teaser.

Empress of the Elements Qiyana Champion Teaser - League of Legends

Qiyana, Empress of the Elements Champion Theme - League of Legends