Keep the Ing Hive safe at all costs.

Keep the Sanctuary Fortress safe at all costs (formerly).

Quadraxis is a giant robot and the penultimate boss of Metroid Prime 2: Echoes.

Quadraxis is a giant spider-like robot, with four legs, three red eyes, and a giant brain inside its head.

Quadraxis is one of the guardians, and presumably the most powerful that serves the Emperor Ing. It is a three phased boss fight that tests most, if not all of Samus' skills, while at the same time dealing with the toxic atmosphere.

In the first phase, Samus has to shoot at all four of Quadraxis' leg joints when they briefly light up blue while avoiding its spin attack, machine guns, and other attacks. After all four of its leg joints are destroyed, its body collapses to the ground, but its head disconnects itself from the body and tries to kill Samus.

In the second phase, Quadraxis' head tries to kill Samus, so Samus has to use the Echo Visor to sever all the Connections between Quadraxis' body and head. When the link is destroyed, Quadraxis will try to reconnect the link. It will also summon Dark Quad machines to defend itself. When the connection is destroyed, Quadraxis is still active, though without the former connection to its main body any longer, which begins the third and final phase.

In the third and final phase, Samus must attack Quadraxis' head until it is stunned. When it is stunned, Samus morphs into a ball and uses the Spider-Ball Track areas from its former body to jump onto Quadraxis. Samus then proceeds by bombing the head twice at very specific areas. After those areas are destroyed, Quadraxis is finally destroyed and grants Samus the Annihilator Beam. 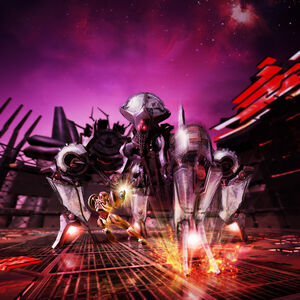