Violent Minion
Quake is a minor antagonist in the Transformers franchise, especially Generation One, based on a figure from the 1988 toyline. He was portrayed as a Targetmaster in the toyline, although this was not used in his fictional appearances.

Quake first appeared in the UK-exclusive story "The Rise and Fall of the Decepticon Empire", as one of the Decepticons serving the Triumvirate on Cybertron. When Megatron challenged their rule, Quake was assigned to fight the former Decepticon leader in the arena. Megatron easily defeated Quake but refused to finish him off, since it would mean killing one of the troops he hoped to lead. Quake was later part of the team led by Ruckus who travelled to Earth to collect Thunderwing. He took part in an aborted assault on the Ark and was later involved in a brief battle with Joyride on Earth that left a human hospitalised.

Quake didn't appear in the Marvel US title until Issue #74, where he was shown with Battletrap and Crankcase among the Transformers assembled to fight Unicron. He took part in the battle in the subsequent issue, launching an assault alongside Waverider and Joyride. Although the two Autobots were killed by Unicron, Quake survived and became part of the new Decepticon army put together by Bludgeon in the aftermath of Unicron's death. Quake and the others evacuated the apparently doomed Cybertron, leaving the Autobots to die, and invaded the planet Klo, decimating the helpless population. When the Autobots followed them there and walked into an ambush, Quake was part of a patrol led by Octopunch who searched for survivors. He shot Blaster, but was apparently defeated in the subsequent battle since all the Autobots present were able to join Optimus Prime for the final battle.

The UK annual text story "Trigger-Happy" depicted Quake as serving Megatron on Earth. He stood watch with Ruckus while Megatron tried to turn the Autobot Backstreet to their cause only to be knocked out by Optimus Prime. 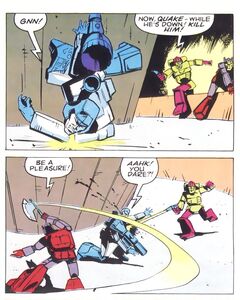