NOTE: This article is about the incarnation of Quan Chi from the film Mortal Kombat Legends: Scorpion's Revenge. The mainstream version can be found here: Quan Chi.

Sub-Zero (in his disguises)

Ruler of Netherrealm (until Shinnok returns)

Deceiving and manipulating people.
Resurrecting the dead only to do his bidding.

Bring Shinnok back to power (failed).

Kill the entire Shirai Ryu clan (succeeded).
Resurrect Scorpion and have him do his bidding (succeeded for a while, then failed).
Get Shinnok's amulet from Shang Tsung's island.
Kill Shang Tsung (all failed).

Quan Chi is one of the two main antagonists (alongside Shang Tsung) of the 2020 direct-to-DVD animated movie Mortal Kombat Legends: Scorpion's Revenge and a posthumous antagonist in the 2021 direct-to-DVD animated movie Mortal Kombat Legends: Battle of the Realms. He is a powerful necromancer and right-hand sorcerer to the fallen elder god Shinnok as well as ruler of the Netherrealm in Shinnok's absence. He is also responsible for the murder of Scorpion's family and clan.

He was voiced by Darin De Paul.

Not much is know about Quan Chi's backstory except that at one point, he joined forces with the fallen elder god Shinnok and helped him take over the Netherrealm. Later on, Shinnok would be imprisoned somewhere by the Elder Gods, so in his absence, Quan Chi took over the NetherRealm. Quan Chi decided to leave the NetherRealm as a horrible place, where millions were tortured for eternity.

Quan Chi starts off the movie manipulating the Lin Kuei clan by disguising as their leader Sub-Zero. He uses his power over the Lin Kuei to have them murder the entire Shirai Ryu clan. They succeed and Quan Chi eventually gets a hold of the only remaining survivors, being Hanzo Hasashi and his son Satoshi. He threatens to kill Satoshi in front of Scorpion if he does not surrender. Scorpion obliges, but Quan Chi kills Satoshi anyway and then impales Hanzo through the mouth with an icicle, killing him.

He is next seen after Hanzo is resurrected. Hanzo was able to get through several demons and eventually confronts Quan Chi. Scorpion at first tries to kill Quan Chi, but Quan Chi shows his powers by manipulating Hanzo's body and twisting it in all sorts of painful ways. He then makes Hanzo an offer to enter the tournament to exact his revenge on Sub-Zero. Hanzo agrees, now dubbing himself "Scorpion".

Quan Chi is seen all throughout the first tournament often by Shang Tsung's side. He first attempts having Scorpion steal Shinnok's amulet but is persuaded to not follow through on his deal by Raiden. Eventually, Quan Chi gets his wish once the tournament starts while Scorpion defeats and kills the real Sub-Zero by impaling him and himself on a large spike. Quan Chi shows up and brags to Scorpion that he was the one being responsible for killing his family and clan before he then walks away.

Quan Chi is next seen during Liu Kang's battle with Goro. He attempts to poison Shang Tsung when they are having their victory drinks after they believe Goro has won. But the extremely smart Shang Tsung saw this coming and dumps his drink on the ground. Quan Chi fibs and tries to tell him he had no idea, but Shang Tsung doesn't believe him and imprisons Quan Chi in his magic. Shang Tsung then taunts Quan Chi for his devotion to the mad god Shinnok.

After Earthrealm wins the tournament due to Scorpion killing Goro and yielding, Shang Tsung escapes while Quan Chi is released. He tries getting Scorpion to give him Shinnok's amulet, but now that Scorpion knows what he did, he refuses. The two then engage in a fight in which after a long intense battle, Scorpion is able to win and kills Quan Chi, ending the wicked sorcerer's reign of terror once and for all and finally avenging Satoshi, Harumi and the Shirai Ryu.

Quan Chi's appearance is identical to his Mortal Kombat X attire so if you want to know more check out.

Quan Chi is shown to be extremely ruthless, heartless, and sadistic. He is willing to kill anyone in his path to achieve his goals even children like Satoshi and allies like Shang Tsung. He kept Nearthrealm as a horrible place where billions were tortured for eternity, all for his sadistic delight. He sees everyone around him as disposable pawns like Scorpion, who he was ready to kill when he was no longer was willing to serve him.

He is also a master manipulator, using his powers to disguise himself as Sub-Zero to kill the entire Shirai Ryu clan. He then uses Hanzo Hashashi's death to his advantage, manipulating him by telling him exactly what he wants to know and giving him promises of revenge while using them to serve his own self-interests. He only reveals himself to Scorpion when he already thought he has won, and that Scorpion is out which ultimately proves to be his undoing when Scorpion returns and kills him.

Unlike his game counterpart, he is shown to be more loyal to Shinnok, as he doesn't try swapping his amulet for a fake one. Though Quan Chi only joined Shinnok for power and likely would abandon him when it no longer was desirable to him. He also very rarely mentions Shinnok too begin with making it clear he only cares about him because of the power it gives him not caring about him as a person, showing Quan Chi only cares about himself. 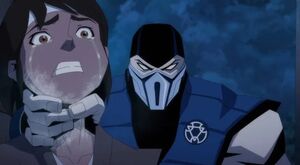 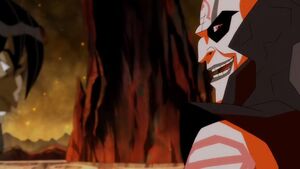 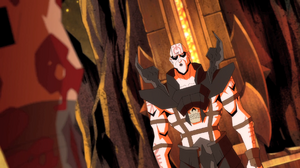 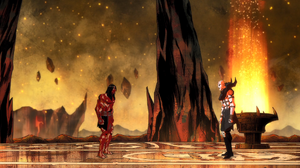 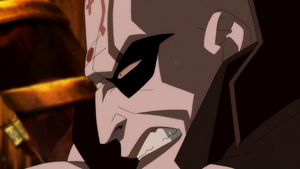 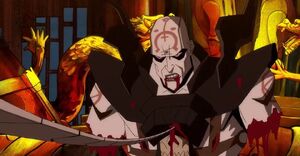