Get rid of his remaining relatives so he can claim his family's tontine.

He was voiced by Shannon McCormick, who also voiced Washington in Red vs Blue, The Undertaker in Nomad of Nowhere, and Professor Ozpin in RWBY.

The Quartermaster is first seen in the episode dragging a bloody garbage bag. Max spots him and offers to go find a new mascot with him to avoid having to hang out with David. The two later head through a dark forest Max suggests just going back to the camp to relax. The Quartermaster then tells Max he needs to look "beyond the camp" and into "the true beauty of nature". Max replies by stating they look like they're the place where teenagers go to get stabbed. The Quartermaster then says "probably" and the two continue on.

The Quartermaster shows up after overhearing David tell campfire stories, believing that someone is killing campers. However, Gwen informs him that they're just telling campfire stories. Disappointed that there aren't any dead campers, the Quartermaster gets ready to leave, but not before warning them not to go to Spooky Island. He also asks what happened to Space Kid. Max tells him that it was a "squirrel-splosion", causing him to remark that "the revolution has begun". The Quartermaster then goes with Gwen and David to give Space Kid a rabies shot, but not before warning Max, Neil and Nikki again not to go to Spooky Island.

It's important to note that, earlier in the episode, as the campers are looking through the Quartermaster's storage room for things to give him, Space Kid discovers a mysterious black box. Opening it causes Space Kid to let out a mysterious satanic chant which, when reversed, states "the master must not be made whole again". Later, after the mysterious flash occurs and the Quartersister disappears, the Quartermaster's hook can be seen having shifted from his right hand to his left. These clues seen to point to the Quartermaster (along with his siblings) being a fragment of a supernatural being. 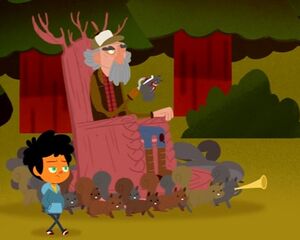 The Quartermaster as king of the animals.
Add a photo to this gallery

Retrieved from "https://villains.fandom.com/wiki/Quartermaster_(Camp_Camp)?oldid=4215962"
Community content is available under CC-BY-SA unless otherwise noted.