Villains Wiki
Register
Don't have an account?
Sign In
Advertisement
in: Servant of Hero, Monsters, Comedy Villains,
and 41 more

Win the competition to become the new chef at the hotel transylvania (succeeded).

Cook and kill Jonathan (failed).
Expose Jonathan to everyone (succeeded, but later backfired).

He was voiced by Jon Lovitz, who also played Emperor Tod Spengo in Mom and Dad Save the World, The Peeper in Little Nicky, T.R. Chula in An American Tail: Fievel Goes West, Mr. Marks in The Producers, and Artie Ziff in The Simpsons.

Quasimodo was first seen with Count Dracula wondering if Jonathan was an actual human. Dracula claimed that there were no humans around. He complained to Quasimodo that he needed spleens-in-blankets instead of the dish that was already made. Quasimodo also frequently acted mean against his sidekick, but treated his pet rat named Esmeralda nicely. The same thing happens when everyone was near the pool.

Later, after Dracula and Jonathan experienced real fun by jumping through floating tables, Quasimodo kidnapped Jonathan while knowing he was a human the whole time. He was pursued by several knights, only to give them the slip and headed to the kitchen. He tried to rotisserate him, but was interrupted by Dracula. He dared Jonathan to scare Esmeralda to prove that he was not human, which failed and proved otherwise. Dracula had Quasimodo paralyzed by magic. After the duo left, his sidekick had revenge by making him stuck picking his nose.

At Mavis' party, Quasimodo and Esmeralda crashed in to expose Jonathan in front of everybody. He could not speak perfectly due to being paralyzed, but a fly knew how to speak frozen and translated for everyone. This causes everyone to panic and ruined everything. During the last scene, he was still stuck and had werewolf puppies playing with his frozen body.

Quasimodo Wilson is quite cunning and unpredictable. He is misanthropic, as he despised Jonathan because he was a human. He wanted to kill him and later expose him to everyone. At first Wilson was loyal to Dracula and slightly feared him. However, he later went against him and betrayed him. Wilson is also very untrustworthy, abusive and psychopathic. Despite this, Quasimodo is also highly polite and sophisticated, and was shown to be a very nice gentleman. 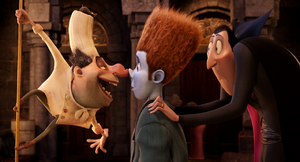 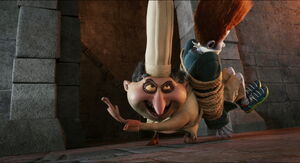 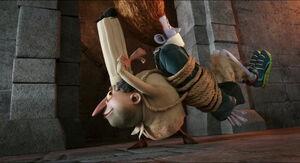 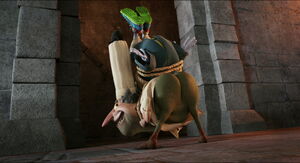 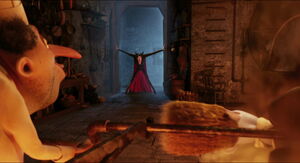 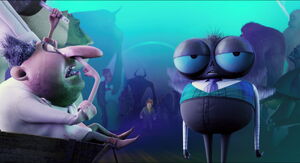 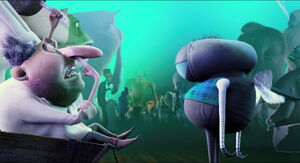 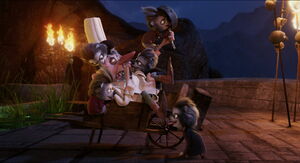