Leadership in the Beasts Pirates

Help excel the goals of the Beasts Pirates

Participation in a coup
Accessory to murder
Psychological abuse
Torture

Queen (in Japanese: クイーン, Kuīn) is an All-Star of the Beasts Pirates and a major antagonist in Wano Country Arc of One Piece. He is one of Kaido's right-hand men, along with Jack and King. He has a bounty of 1,320,000,000 berries.

Queen shows a gluttonous side by how he consumes a large amount of Oshirukos (red bean porridge with rice cake mochi) and prefer to have it all to himself. He is not willing to share his food with anyone and he will become enraged if anyone wants to eat the food that he have. Queen shows that he is not fearful of confronting a powerful enemy like Big Mom and is willing to refuse to give her any of his O-Shirukos. According to some of his subordinates, Queen will become angry if he does not get any of his food to eat.

Queen also shows that he is composed under a stressful situation like having Big Mom rampage throughout his prison. He is able to command his men to take on a dangerous situation, like an angry Big Mom, despite already getting battered by her. Despite not showing fear towards Big Mom, Queen is shocked when she regains her memories, recognize him, and emanates a powerful and intimidating aura. Knowing the danger Big Mom poses, Queen is willing to handle the problem she posed and trusts his other teammates like Babunuki to watch over the prison.

Despite of his fears toward Big Mom, Queen is disrespectful towards her by calling her an "old hag" and refused to remove the chains that cuffed her.

As one of Kaido's commanders, he is very strong and is implied that he is stronger than Jack who is quite strong himself.

Queen has immense strength when he easily block Luffy's punch.

Queen has tremendous durability and endurance when he was injured by Big Mom.

Queen ate the Ryu-Ryu no Mi, Model: Brachiosaurus, which allows him to become a Brachiosaurus hybrid or full Brachiosaurus at will. It also gives him the ability a boost in size and physical strength. In this form, he seems to possess superhuman endurance as he was able to survive a beating from Big Mom. He can also headbutt his target with this form causing the ground to crack beneath the target.

According to his subordinates, Queen is knowledgeable on building things like making diseases. His epithet of Queen the Plague comes largely from his knowledge of making diseases and plagues and using it as weapons. For example, using creating a disease that can leave people mummified when they come into contact with it.

Queen, along with King, Jack, and their leader Kaido helped Kurozumi Orochi in his plot to kill the Kozuki Family in a coup. During this incident, Queen played a role in helping Kaido and Orochi destroy the Kozuki Family's palace and killing the Kozuki Family. Since Kozuki Oden's death and the fall of the Kozuki Family, Queen along with the Beast Pirates takes up residence in Wano Country and are allies with Orochi and his forces.

Queen appears in a discussion with Jack and King about a new business partner for the Beasts Pirates since Doflamingo was no longer a part of their business. During their conversation, Queen and King insulted each other and both of them turned to insult Jack. After their meeting, He arrives at Udon prison with other Beasts Pirate members. Queen remarks at the noise inside the prison. When he got into the prison, he dances in front of his men. He then looks at a picture of Komurasaki and says that after spending time at the prison, they are going to go the Pleasure District. Queen sits on the throne and is informed of the problems at the prison. He is shocked to hear that Eustass Kid escaped, the key to the seastone chains are gone, and that Luffy is attempting to escape from prison. He orders his men to bring Luffy and Hyogoro to him. Queen offers Luffy an opportunity to join the Beast Pirates but the latter refused. Queen also insults Hyogoro and decides that he made up his mind to handle Luffy and Hyo.

Queen devises a plan to have Luffy and Hyogoro compete in a rigged sumo-wrestler match. Queen places collars on Luffy and Hyogoro's neck. He tells them that if they step out of the ring, the spikes inside the collar will react and decapitate them instantly. Queen also removes the sea-stone chains from Luffy and has his men get into the ring to fight Luffy and Hyogoro. Queen tells Luffy that the fight can end if he chooses to join the Beast Pirates. As the fight starts, Luffy knocks out Queen's men with Conqueror's Haki which Queen liked. Queen spectate the battles when Luffy manages to defeat the pleasures. Queen remarks that the O-Shirukos are important food to him and that he brought a lot of it to the prison for him to eat. Queen watches the competition and remains very interested in Luffy's and Hyogoro's battle against Alpacaman and Madilloman. As the fights continues into the night, Queen decides to postpone the fights until day time and leaves the arena. In the morning, Queen is notified by Kaido over the den-den mushi that Komurasaki is dead and cries after hearing the news. Queen is shocked to see Luffy and Hyogoro bloated and wonders how they gained so much weight overnight. Queen prepares a live-video den-den mushi of Komurasaki's funeral to see it for himself. Queen watches the execution of Yasuie and remarks on the laughter of the citizens and Orochi's cruelty.

When Eustass Kid is brought back to Udon prison along with Killer (for failing the mission Orochi gave him), Queen have them tortured by attempting to drown them in water. Queen tells Luffy that Kid and Killer would be released when both he and Hyogoro dies. Luffy gets angry at Queen's new rules and attacks him. Queen knocks back Luffy and angrily tells him that he is going to die. Queen's subordinates remarks on Queen's anger since he did not get to eat any O-Shirukos since waking up. Queen hears a loud noise outside and wants to know what is going on. To Queen, the Beasts Pirates, and Luffy's surprise, Big Mom appears after destroying a couple barriers. Queen says he thought that Big Mom's ship sank and wonders why she is at Udon Prison. Big Mom tells Queen that she was told that there were O-Shirukos in the prison. Queen becomes agitated from her response and turns into his brachiosaurus form. He tells her that O-Shirukos is all his and that she will not have any of his food. In response to Queen's remark, Big Mom jumps up and slams Queen's head into the ground demanding the O-Shirukos. She grabs Queen and begins to spin him around demanding the O-Shirukos from him. Big Mom throws Queen onto the wall which resulted in him releasing Kid and Killer from their captivity and destroying the cell that Kawamatsu is contained in. He reverts back to his human form after suffering injuries. Despite being immobile from his injuries, Queen overhears Luffy admitting that the O-Shirukos he ate is delicious.

Queen gets up from his injuries and orders his men to mobilize against Big Mom when she returns to the same spot of the prison. When Big Mom returns after chasing Luffy around the prison, Queen goes into his brachiosaurus form and headbutts Big Mom. As he headbutts her, she regains her memories and Queen was shocked at the change in her aura as she recognizes Queen. Big Mom falls asleep and Queen takes the opportunity to have his men sedate her with 100 strong anesthetics into Big Mom and wrap her with 100 pure seastone chains. Queen and some members of the Beasts Pirates board a ship with Big Mom and proceeds to bring her to Onigashima island where Kaido resides. Queen leaves Babunuki in charge of Udon prison during his absence.

Queen escorts Big Mom to Onigashima island where she was fed food by the Beasts Pirates. Queen stands alongside Jack and King as they contemplate the issue of Big Mom being in Wano. Queen blames King for enabling her to enter the country. Jack wonders why Queen brings Big Mom to Onigashima to which Queen said he had no other choice since Udon's communication network was cut off. Queen witness Kaido ordering the Beasts Pirates to unchain Big Mom from the seastone chains. Queen along with the other Beasts Pirates are shocked to see the clash between both emperors. As Kaido and Big Mom fights each other, Queen chastises some of his teammates from wanting to get off Onigashima. He tells them, that he would not want to abandon his leader as he fight Big Mom. Queen also communicates with Babanuki as he wants to know what is going in Udon Prison. Babanuki tells Queen that Luffy, Kid, and the prisoners are in their cells and under control. Queen is glad to know that. Unbeknownst to Queen, Luffy and his allies taken over Udon Prison and Eustass Kid escaped again. Queen then got information from King, that the Numbers are coming to attend the upcoming banquet. Queen remarks that the Numbers drink too much, have a drinking problem and that he does not like them. Queen looks at Kaido and Big Mom and wonders why they are so happy even though they were trying to kill each other moments ago in a fight. Kaido and Big Mom announced that they are now allies and that the Beasts Pirates and the Big Mom Pirates will come together so that the two emperors can conquers the world. The two says that they can go back to fighting each other after taking over the world to Queen's surprise. 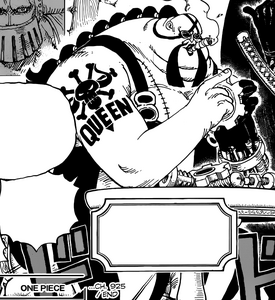 Queen in the manga. 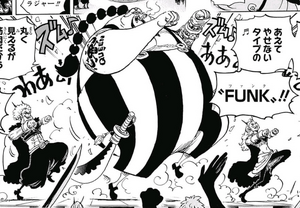 Queen's musical number.
Add a photo to this gallery

Retrieved from "https://villains.fandom.com/wiki/Queen_(One_Piece)?oldid=3522820"
Community content is available under CC-BY-SA unless otherwise noted.