Queen Aggravain is the main antagonist of Mary Rodgers' comedy musical Once Upon A Mattress​.

With her husband King Sextimus muted by a curse, Aggravain took the throne and became determined to make sure their son, Prince Dauntless, never married, making ridiculous tests that every girl who was tested failed. To make matters worst, Aggravain also made a rule that as long as Dauntless isn't married, no one else in whole kingdom could marry either.

Now determined to find a real princess after learning his girlfriend is pregnant, the kingdom's leading night Sir Harry leaves the kingdom to find a real princess. He comes back with Princess Winnifred the Woebegone of the Marshlands (or Fred as she likes to be called). Reluctant to believe that Fred is a real princess, Aggravain became determined to stop her from marrying Dauntless. Assisted by her wizard sidekick, Aggravain decides to give Fred a test of sensitivity by putting a pea under twenty mattresses, if she can't sleep over all those, mattresses, she will pass.

In a plan to make Fred fail, Aggravain throws a ball and makes everyone dance "The Spanish Panic" hoping to make Fred tired enough to sleep, but this fails as Fred is the only one left standing.

Later while she leads the knights and ladies to carry the twenty mattresses, Aggravain catches Sextimus, the Jester, the Minstrel, and Sir Harry's girlfriend Lady Larken trying to runaway and banishes the Minstrel by daybreak. Determined to help Fred pass, The Jester and The Minstrel trick the Wizard into telling them the test.

In an act of cheating, Aggravain asks for many thing to make Fred fall asleep, including the Nightingale of Samarkand to sing her to sleep. But Fred is kept wide awake. It seems that there is some "lump" under the mattresses that is keeping her from relaxing. She starts counting sheep.

That morning, Aggravain says the test has already happened and lies that Fred failed, but Fred drowsily stumbles into the throne room while still counting sheep, making everyone excited that she passed the test. Refusing to accept defeat, Aggravain says there will no marriage and tells Dauntless she will not let him marry "a nobody", noting caring if she is a princess, but Dauntless can no longer allow her attempts and shouted "I TOLD YOU TO SHUT UP!". And with that, Aggravain finds she can no longer talk (much to her disgrace) and his husband's curse was lifted as Dauntless (the mouse)metaphorically devoured her (the hawk), and as punishment, he forces to hop, jump and skip around the room to everyone's amusement. And with Fred and Dauntless married, Aggravain is forced to step down and defeated. 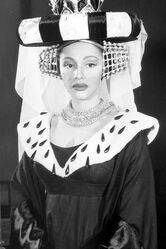 Jane White as Queen Aggravain in 1959. 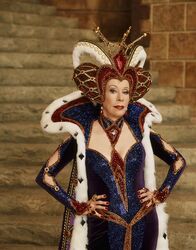 Carol Burnett as Queen Aggravain in the 2005 Disney film adaptation.
Add a photo to this gallery

Retrieved from "https://villains.fandom.com/wiki/Queen_Aggravain?oldid=2950920"
Community content is available under CC-BY-SA unless otherwise noted.