Defeat the Changeman and conquer Earth.

Psychotic Monarch
Queen Ahames is a general of the Great Star League Gozma serving as the second lead commander of their Earth invasion fleet and a major antagonist in Dengeki Sentai Changeman.

She was portrayed by Fukumi Kuroda.

Queen Ahames was originally the queen of Planet Amazo. After her planet was invaded by the Gozma, Ahames was forcibly recruited by Star King Bazeu to lead the Gozma forces under threat of her planet being destroyed. She would later conspire with General Giluke and the Space Beast Marzo to assassinate Bazeu, but the attempt failed. Though she and Giluke were spared, Ahames was separated from Giluke and relocated to work on other Gozma functions.

Ahames later arrives on Earth during Gozma's attack on it hoping to regain Bazeu's favor so he would restore her ruined world. Rather than work alongside Giluke's invasion force, Ahames attacks Earth on her own terms. Her plan involved creating a "flying ghost ship" over the Dutch Quarter of Nagasaki to lure both the Gozma and the Changeman to her. After her plan was foiled, Ahames opted to stay on Earth, though was forbidden by Bazeu from teaming up with Giluke to keep them from turning against him again if they reunited.

Hearing of the power of the Rigel Aura emitted by young girls of planet Rigel when they reach maturity, Ahames made her move to claim the aura of the Rigelian girl Nana for herself. To this end, Ahames brought out both her own personal steed Jangeran and a trio of elite Space Beast Warriors In the process, she fought against both the Changeman, who were protecting Nana, and Giluke, who also sought the aura. Holding off Giluke and the Changeman, Ahames was successful in bathing in the Rigelian aura, granting her all new powerful abilities. Following Giluke's execution for his failures, Bazeu gave Ahames command of the Earth invasion.

Ahames later began to be haunted by Giluke when he returned as a ghost, swearing revenge on her alongside the Changeman for the part they played in his death. To prevent Giluke from coming back, Ahames went after Nana to prevent him from using her Rigel Aura to power up himself. However, Bazeu tells Ahames to hold off and allow Giluke to get away with his plans, interested in his tenacity to survive "death" and not seeing any results from Ahames' battles. Without Ahames to interfere, Giluke was successful in getting Nana to emit the aura again, allowing him to become Giluke.

After most of the Gozma forces were either killed or defected, Ahames was forcibly turned into Space Beast Maze against her will by Giluke and Bazeu. The two promptly sent Maze to destroy the base of the Earth Defense Force and the Changemen. After injuring the Changemen in her initial fight with them, Maze summoned a squad of Hidrer Soldiers and attacked the EDF Dengeki Squadron base. Shiima attempted to rebel her and her soldiers, but was soon overpowered by Maze. It was the however that Yui Ibuki revealed himself to be an alien and managed to hold her off for the time being. After being joined by the Changemen, Shiima and Nana, Ibuki faced down Maze after she regrouped with more Hidrer Soldiers. It was then that Ahames split from Maze out of her own sheer tenacity, albeit with her sanity depleted thanks to her transformation.

While Maze held off the Changemen and Ibuki, Ahames went to attack Dengeki Squadron base and made her way through it destroying nearly everything in front of her while laughing maddeningly. As the base explodes around her, Ahames begins psychotically calling out for Bazeu to restore planet Amazo with herself as her rightful ruler for her victory, only to receive no response. In spite of this, Ahames continued to call out Bazeu's name while tears began to form in her eyes as she realized that her planet may have been destroyed long ago. Left to die by Bazeu, Ahames ultimately perished when she was consumed by the fiery destruction of the base. 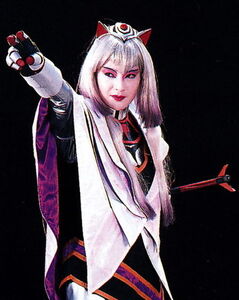 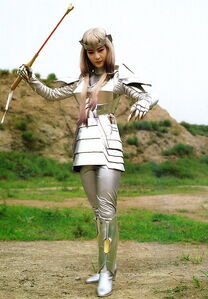