Grendel (in the Japanese dub)

Auriana
The Queen
The Witch

Jack and the Witch

Abducting children and transforming them into harpies.

To keep her "slaves" under her command.

Queen Auriana (called Grendel in the original Japenese dub) is the main antagonist of the 1967 anime film Jack and the Witch. She is a malevolent and treacherous witch who kidnaps children and transforms them into harpies to serve as her slaves.

She was voiced by the late Hisano Yamaoka in the Japanese version, and Corinne Orr in the English dubbed version.

Auriana resided in a castle, and had spent an unknown amount of time abducting children, whom she would transform into harpies and then use as her slaves. Auriana would often send the harpies off to find more children to transform. Auriana wished to keep doing this until her realm was filled with harpies. Children who had failed Auriana were exiled to the Cave of Eternal Ice, where they were frozen in ice forever. One of Auriana's harpies, named Allegra, brought back a young boy named Jack for Auriana to transform. However, Jack managed to escape from the castle, though his friend, a mouse named Squeakers, was transformed into a harpy. Allegra and her brother, Harvey Harpy, fearing punishment, pursued Jack, but they were overpowered and forced to retreat.

At Auriana's castle, Allegra was threatened by the other harpies that she would be exiled to the Cave of Eternal Ice, prompting her to make another attempt to retrieve Jack. However, she was knocked unconscious, to which Jack nursed her back to health. Allegra fled soon afterwards, and Jack and his animal friends returned to Auriana's castle to rescue Squeakers. After being tricked by Allegra as punishment for their defiance, Jack was nearly transformed into a harpy, but escaped once again. Auriana berated Allegra for having let Jack escape again, and banished her to the Cave of Eternal Ice. Upon learning of this, Jack returned to save her.

After risking his life to save Allegra, Jack managed to restore Allegra to mortal form. Auriana, enraged, attacked the two. Allegra attempted to defend Jack, but she had been stripped of her magical powers and didn't have the strength to defeat Auriana. The witch proceeded to torture the two children, nearly killing them, but Jack's friends realized that her crystal ball was the source of her powers and destroyed it. Stripped of her powers, Auriana reverted into her true form of a hideous goblin, and was forced to flee from Jack. Auriana then tried to escape in her balloon, leaving behind a time bomb to destroy the castle and those trapped within it. However, Harvey latched the bomb onto her balloon. In Auriana's rush to dislodge the bomb, she crashed into the side of the castle as the bomb exploded, killing her and ending her reign of terror. After her death, the curse was broken and the children were restored to their true forms. 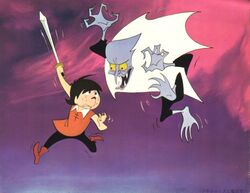 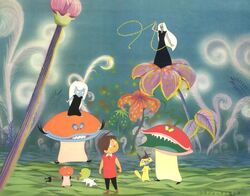 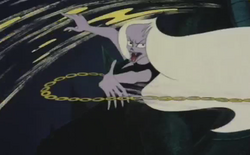