Erase Azeroth of all imperfection.

Queen Azshara is a major villain in the well-known MMO video game World of Warcraft. She used to be the beloved queen of the Night Elves 10,000 years ago and was one of the main causes of the War of the Ancients.

She was voiced by Laura Post, who also voiced Harley Quinn in Batman: The Enemy Within, and Ragyo Kiryuin in the English dub of Kill la Kill.

Azshara tried to bring Sargeras to Azeroth via a portal in order to become his wife, seeing him as the only being worthy of her. She also wished to have Azeroth cleansed to make it perfect for her, showing her love only to the Highborne. After the Burning Legion was defeated and the portal was destroyed, the Sundering occured and seeing the waters of the Well of Eternity entering her palace, used her powerful magic to shield herself and those in the palace she resided in. However, she kept hearing voices offering her a chance at survival. She accepted and she and all who resided in the now sinking palace became the first Naga, with Azshara becoming their queen, becoming a hideous monster reflecting the evil that was always in her. It is possible that the voices were that of the Old Gods, most likely N'Zoth, who corrupted Deathwing.

Her ultimate goal was to get rid of Neptulon the Tidehunter so she could rule the seas.

She was encountered in the Well of Eternity instance but she shielded herself and had her Magi fight the adventurers and aided them by trying to use her magic to control the adventurers. Her Magi fell but before she would be fought, a shadowbat carrying Varo'then flew by helping her escape. She then orders Varo'then to deal with the adventurers, only for him to die and his sword impaling Mannoroth allowing him to be defeated, ending the War of the Ancients and allowing the Old Gods' influence on the Dragon Soul to weaken allowing it to be grabbed by Nozdormu.

Azshara is a very powerful mage, such that only the very strongest members of the Burning Legion could have matched her. She has since grown in power thanks to the Old God's influence. She may even be more powerful than Deathwing himsef and Mannoroth admits he is no match against her as well as the fact that only powerful being like Archimonde and Kil'jaeden could prove a match for her. 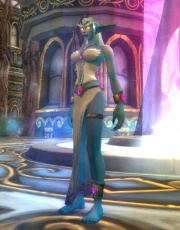 Azshara as she appears in the Well of Eternity, before her transformation into a naga 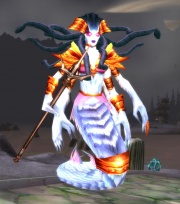 Queen Azshara as a naga 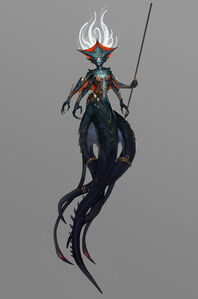