Queen of the Shadow World

Ruler of the Demons

Taking the life energy of others including her minions to increase her power.

Rebuild her palace.
Invade and conquer the human world (all failed).

She was voiced by Diane Salinger.

Queen Bansheera is the evil matriarch of the Demons and mother of Impus/Prince Olympius. She was in parts unknown when Diabolico and his band were freed, and later returned and gave orders in a spiritual form at the beginning of the series. Bansheera eventually returned in a mangled bodily form after an attempt by Spellbinder to bring her into the human world due to the Lightspeed Rangers tampering. She eventually gained a ghastly final form by absorbing Vypra's life energy.

Bansheera set out to conquer the world, and proved far more ruthless than Diabolico or Olympius. Bansheera also had no regard for her minions (even her own son) and used them for her own gain. She absorbed Vypra to regain her original form, forced Diabolico to destroy Loki, left her own son in the Shadow World, and nearly destroyed the Rangers. Despite Diabolico telling the Red Lightspeed to strike where her heart should be, she continued to menace the Rangers. She eventually turned Diabolico and Olympius into Super Demons, but they were defeated.

She attempted to open the gateway to the Shadow World to unleash all of its fallen monsters. Taking over the Aquabase and the Omega Megazord, she was close to succeeding. However, Bansheera ended up suspended above the Demon World portal by Carter Grayson. The spirit of a vengeful Diabolico appeared, pulling her inside, where she was attacked by the undead monsters, much to Diabolico's satisfaction as he witnesses the downfall of his former queen.

Queen Bansheera could be described as traitorous, ruthless, cruel, sadistic, and insane. Nothing short of being obsessive and pathological, Bansheera would go to any lengths of returning to power and became notorious for sacrificing her minions to achieve her agenda. The first most significant realization of Bansheera's obsession is expressing how pleased she was that Diabolico, Vypra, and Loki had imprisoned her son Olympius in the Shadow World, seeing her own son as expendable just as her other minions. After she had consumed Vypra's energy to obtain her full body, Bansheera became dangerously unstable with power. The Rangers and her demon minions were unsafe from her madness. But much to her credit, Bansheera did prove to be a loving mother when Olympius was still the infant Impus. When she returned to the Skull Cavern after a long and unexplained absence, she expressed her joy in seeing Impus again. Also, considering that Impus had for some time had a longing for his mother Queen Bansheera, further proves the Queen's nurturing side. She is shown to expect her forces to remain loyal no matter what. When Diabolical's spirit returned one last time, she was expecting him to help her, despite the fact she made him kill his best friend. According to Ryan in the episode The Cobra Strikes, "she's worse than 10 Diabolicos". 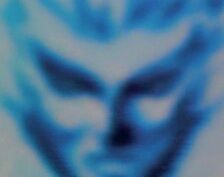 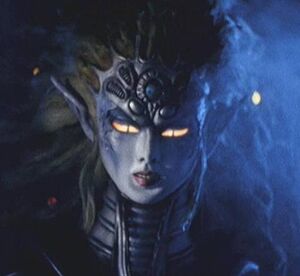 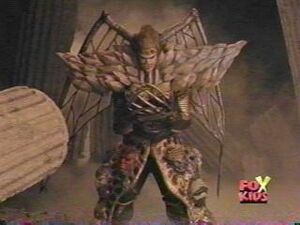 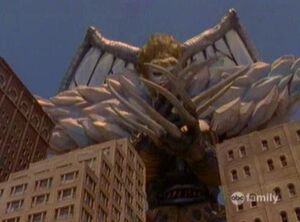 Giant Form
Add a photo to this gallery

Retrieved from "https://villains.fandom.com/wiki/Queen_Bansheera?oldid=4272454"
Community content is available under CC-BY-SA unless otherwise noted.