Queen Battlewinner of the NightWings

NightWing Queen
Secret of the NightWings

Staying in her pot of lava to avoid freezing

Keep the IceWing breath from killing her

Conquer the rainforest (both failed)

Queen Battlewinner is an antagonist from Wings of Fire. The former NightWing queen, she was vicious and cruel, but cared for her tribe's well-being very deeply.

Queen Battlewinner is massive, as big as Morrowseer. She had gleaming black scales with wisps of white steam rising from inbetween. Her eyes were blue with black pupils. Some of her teeth were frozen into icicles.

Her throat and mouth were coated with a layer of feathery frost that glowed a pale blue. Her black tongue also has a coating of frost stuck on it.

She was heavily built, with wide shoulders, a ridged back and a long neck. Her snout was long and thick, and her snout had several battle scars on it.

Her voice was creaky and rough, and was described as eerie. It was compared to 'claws scraping on ice several caves away.'

Queen Battlewinner was cunning and manipulative. She is focused and determined, honing in on her one goal, to conquer the rainforest. She is also secretive, as not even her own tribe (except three) knew about her condition.

She is also slightly insane, as she knowingly committed suicide by lunging out of her lava vat to kill Glory.

Before the events of the main series, Battlewinner led expeditions to find a new home for her tribe. During one such venture, she was attacked by an IceWing, possibly due to the two tribes' bitter rivalry. She escaped alive, but the IceWing blasted her in the mouth with frostbreath, which should have frozen Battlewinner from the inside out. The only reason that she didn't die immediately was her ability to breathe fire. Her internal fire reservoir counteracted the ice long enough for her to fly back to the island. In desperation, she dove into a lava pool, hoping to die quickly, but instead, it created a balance where the external heat prevented the ice from killing her. However, this left her unable to ever leave the lava without the ice finishing her off. To prevent other dragons from learning of her weakness, Battlewinner had a hidden room created behind the NightWings' council chamber and lived in a cauldron filled with lava as big as six dragons. This way, she could watch her tribe and make her image more mysterious and powerful. When she "speaks", she uses her daughter, Princess Greatness, as her spokesdragon, whispering into her ear from behind the screen.

Battlewinner also, at one point, coins the Dragonet Prophecy with Morrowseer. They write it to sublty indicate the rise of the NightWings into their new home. Morrowseer takes the finished script and 'delivers it' to the outside world, and it becomes well known throughout the continent.

During The Dark Secret, Battlewinner's council is arguing about the time to attack the rainforest, since the volcano is due to erupt in a few days. Battlewinner (through Greatness) insinuates that the army is not yet ready, then has her guards kill a dragon that disagrees with her by drowning him in lava. Later, Starflight and Fatespeaker discover her secret and plead with her to not fight the RainWings. Queen Battlewinner dismisses them, saying "Anything... for the tribe."

During the RainWing's invasion of the Night Island, Starflight and Fatespeaker show Queen Glory Battlewinner's secret. Glory captures Greatness and forces her to show them the secret key, which the NightWing princess does with not much resistance. When they meet Battlewinner, Glory demands she never kidnap RainWings or think about the rainforest again. Battlewinner sourly refuses, but Starflight suggests that the NightWings can go live in the rainforest if they accept Glory as their queen.

Battlewinner is outraged, but Starflight ignores her, realizing she will die in the eruption regardless. They turn to leave and discuss the arrangement with Greatness, but Battlewinner's fury outweighs her sensibility and she lunges out of her lava vat, aiming to kill them all. However, the frostbreath claims her and she dies within seconds. 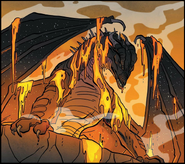