One of the leaders of The Light

Queen Bee is a major antagonist in the TV show Young Justice. She is the ruler of Bialya, and is one of the main members of the evil organization called The Light, under the alias of L-4. According to Batman, Queen Bee possesses the ability of persuasion over most men and some women.

She was voiced by Marina Sirtis, who also voiced Demona in Gargoyles, Samantha in Adventure Time, and also played Detective Inspector Walker in Gadgetman, Mary Ann Eagin in Diagnosis Murder, Layla Mokhtari in The Closer, and Ux-Mal Entity in Star Trek: The Next Generation.

She was referenced multiple times as the episode "Bereft" took place in Bialya. In "Revelation", it is revealed that Queen Bee is L-4 of The Light (Project Cadmus' Board of Directors). In "Image", Queen Bee convinces Quraci President Rumaan Harjavti that Qurac and Bialya used to be one country (later revealed to be Psimon manipulating Harjavti). Queen Bee's soldiers move their way through the Logan Reserve causing a wildebeest stampede only to be halted by the team in their stealth mode. One of Queen Bee's jets end up attacking the Logan Reserve injuring Marie Logan's son Garfield while he was releasing a sick oryx and an injured wildebeest from the barn. When Robin and Superboy catch up to Rumaan Harjavti, they are attacked by Bialyan soldiers using Apokoliptan technology. The next day, Rumaan Harjavti tells Queen Bee that he has changed his mind about giving up Qurac to Bialya. Queen Bee is taken away vowing to get revenge on Qurac. This was later revealed to be an act by Miss Martian (who was imitating Queen Bee to make her scheme public knowledge before she imitated Bruce Wayne to meet with Rumaan Harjavti). Miss Martian later finds Queen Bee in Garfield Logan's room and states to Miss Martian that Psimon isn't the only one who knows what Miss Martian really is and that she'd better cooperate with her if she doesn't want the rest of the team to know her true form. She also states that should any of her team attack her personally or should she command it that Garfield would physically hurt himself to protect her. In "Usual Suspects", Queen Bee accompanies Lex Luthor, Sportsmaster, Bane, and Blockbuster to Santa Prisca. Miss Martian is also summoned by Queen Bee. Queen Bee then tells Miss Martian to attack Artemis after she immobilizes Blockbuster. Miss Martian ends up knocking out Queen Bee. Lex Luthor manages to carry Queen Bee to his helicopter enabling them to get away. In "Auld Acquaintance", Queen Bee appears with Ra's al Ghul, Lex Luthor, Ocean Master, and Brain when they raid Cadmus and steal all the clones. In "Earthlings", it is shown that at some point during the five years between the first and second seasons that Queen Bee orchestrated the death of Marie Logan. In "Beneath", Queen Bee was shown learning that the shipment of runaway children that Psimon, Icicle Jr., Mammoth, Shimmer, and Devastation were guarding were stopped by the female members of the Team. She isn't worried since they had a second shipment of runaway children that will be delivered to The Light's Partner. In "Intervention", Queen Bee learns about what happened in her lair and gives Mammoth, Shimmer, and Devastation her sympathies. Queen Bee then states that the Light's plans for the Reach, the Justice League, and the Team may proceed ahead of schedule. 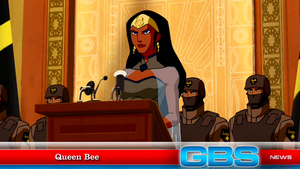 Queen Bee makes use of rhetoric to cozen the public. 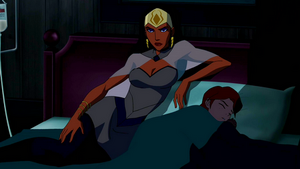 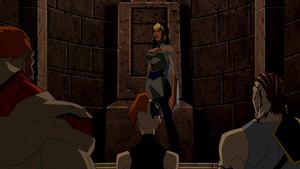 Queen Bee and her cronies continue to scheme.