Queen of the Dark Kingdom

Sitting on her throne.

Kill Sailor Moon.
Have Endymion in her service.

Queen Beryl is the main antagonist of the first arc of the Sailor Moon series. She is the Queen of the Dark Kingdom and a servant to the entity known as Queen Metalia. She is also Sailor Moon's arch-nemesis.

Once a member of the Earth Kingdom, fell in love with Prince Endymion but was heartbroken to find that he loved Princess Serenity of the Moon Kingdom. This lead to Beryl crossing paths with Queen Metalia, who offered to give her the mean to exact revenge by declaring open war on Silver Millennium itself. Ultimately, having gathered a large majority of Earth Kingdom residents to join her campaign, Beryl ended up killing Endymion in a fit of rage before Queen Serenity put a stop to Metalia's evil.

However, Beryl reincarnated in present day and was subconsciously guided to the ruins of the Earth Kingdom at D-Point in the Arctic. There, Beryl undid Serenity's seal on Metalia and regained her memories as she established the Dark Kingdom with Endymion's four knights Jadiete, Nephrite, Zoicite, and Kunzite as her Four Kings of Heaven. While claiming to seek the Legendary Silver Crystal for Metalia, using the being's power to revive Endymion as her thrall, Beryl actually intended to betray her benefactor and use the crystal's power for her own agenda. But Beryl was killed when Sailor Moon used the Moon Kingdom's sacred blade to destroy the necklace that bound Beryl to the mortal coil.

During the first half of Sailor Moon, Beryl was trying to gather energy for Queen Metallia. She sent Jadiete (Jadeite) to steal energy from people, but Jadeite's plans kept getting foiled by the Sailor Scouts. In Episode 10, Jedite fought them himself but was defeated, and as punishment, Beryl condemned him to eternal sleep and sent Neflite (Nephrite) to gather energy. Neflite's plans were foiled every time, but starting from Episode 18, Beryl began looking for the Imperium Silver Crystal. After the death of Neflite, Zoycite (Zoisite) was given the task of finding the crystal.

Using Neflite's Black Crystal, Zoycite tracked down the seven people with the Rainbow Crystals inside them, though some were taken by Tuxedo Mask, and one by Sailor Moon. Beryl also wanted Tuxedo Mask, who was really Prince Darien/Endymion, on her side, but Zoycite tried to kill him in revenge for scratching his face, so Beryl killed Zoycite as punishment for disobeying her. Afterward, Beryl and the Negaforce turned Darien (Mamoru) evil. However, by this time the Rainbow Crystals had combined into the Silver Crystal, which Sailor Moon, who was really Princess Serena, possessed now.

From this point on, Beryl's fourth and strongest general Malachite (Kunzite) tried to find and kill Sailor Moon to take the crystal from her. He failed each time, and was eventually killed by Sailor Moon. In the final episode (which proceedes its sequel series, Sailor Moon R, though it is often treated as a second season instead of a different show), the 5 Sailor Scouts headed over to the Dark Kingdom to stop Beryl, but Sailor Jupiter, Sailor Mercury, Sailor Venus, and Sailor Mars were all defeated by the Doom and Gloom Girls, who are themselves killed by the Sailor Scouts in the process.

Beryl teleported Sailor Moon to the Dark Kingdom where she commanded Endymion to fight her, but she found a way of healing him and as Beryl threw a gigantic crystal shard at them, Darien threw his signature rose attack at her, seriously injuring her, but also fatally injures Darien. In the original uncut, Queen Beryl then berates Darien for protecting Sailor Moon and for not choosing her until her skin where the rose hit begins cracking like porcelain. She realized that the rose is his energy for the love of Sailor Moon. Queen Beryl then sinks to the floor, yelling "I refuse--I refuse to believe that!" The Negaforce gave Beryl a final chance and combined with her, transforming her into a giant form, but Sailor Moon transformed into the Moon Princess and used Cosmic Moon Power, creating a giant energy ball that destroyed Queen Beryl. 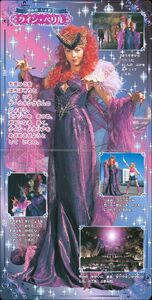 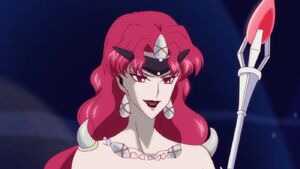 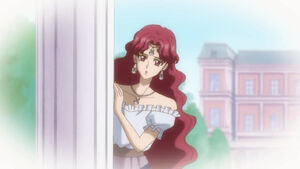 Beryl in the old days of Silver Millennium, watching over the man she loved-Prince Endymion 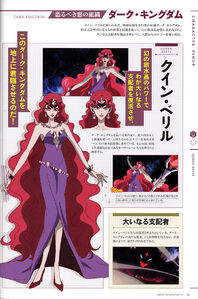 A page on Queen Beryl in the Sailor Moon Crystal Book. 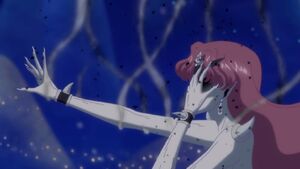