Kill everyone in Mortville with rabies.

Queen Carlotta is the main antagonist of John Waters' Desperate Living. She is an evil, obese, pervert who rules the town of Mortville (just outside Baltimore, Maryland) with an iron fist. She routinely sends her squad of goons to murder anyone who disobeys her in anyway.

It is unknown how Queen Carlotta came to be queen of Mortville. She is openly a fascist, and has paintings of famous dictators all over the walls of her castle (including Adolf Hitler). While her town and citizens are starving, she indulges herself with gigantic feasts. She possesses a personal army that does whatever she commands, and her army also serves as her personal concubines, whom she routinely engages in sexual activity with. Near the end of the movie, Queen Carlotta becomes enraged at the town when one of the protagonists hurls a mud ball at her. She then hatches a plan to kill everyone with a rabies outbreak, with the help of one of the protagonists she converted to her side. She even tries to kill her own daughter, Princess Coo-Coo in the process.

At the end of the movie, a now rabid Princess Coo-Coo raises a rebel army to overthrow her mother. The rebels storm the castle and cook the queen alive. The movie ends with the citizens of Mortville celebrating while feasting on their former queen.

Although Queen Carlotta is a wealthy monarch who dresses like a stereotypical queen, she has no manners at all, and is a perfect example of a barbarian. She is rude, loud, vulgar, gluttonous, and above all, disgusting. She also uses brute force and commits terrible and sadistic crimes against her subjects for no reason whatsoever. 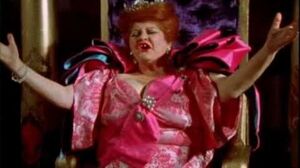 Desperate Living Queen Carlotta's "exile speech"
The Queen exiles her daughter.
Add a photo to this gallery
Retrieved from "https://villains.fandom.com/wiki/Queen_Carlotta?oldid=3706268"
Community content is available under CC-BY-SA unless otherwise noted.