Talking to her loyal maids.

Enjoying the luxuries of being a queen.
Belittling Lee Chang.
Having expensive snacks.

Queen Cho is a fictional character and one of the two main antagonists of the 2019 South Korean horror television series, Kingdom.

Not much is known about Queen Cho, except the fact that she was born into the extremely sexist Joseon dynasty, where women were oppressed. Her father Minister Cho was cold and distant towards her, claiming that she was too "naïve".

Due to the fact that she was born into the corrupt Cho Clan, she joined on her father's plans to remove the Royal Family from power and allow the Cho Clan and their followers to achieve political power over Joseon a plan that her father has been working on all his life.

While she was working on getting into the King's inner circle, her father discovered a Resurrection Plant that could bring the dead back to life and utilized it to bring a group of dead villagers to life and destroy the Japanese forces invading Korea.

After the Japanese were defeated, Minister Cho still used the resurrection plant to his advantage. By this time, Queen Cho married the King, despite him being thirty years older than her and used her new position to the Clan Cho's advantage and she would become pregnant with the biological baby of the King. Unsure if the baby was a boy or a girl, her father demanded that she had to have a son, as only the babies of the male gender can be a king.

Since the baby was related to the King and the Queen, whilst Prince Lee Chang was conceived by a concubine, this will make the baby a new candidate for the throne if the baby is a boy. At some point, the King died of Small Pox and the Cho Clan, realizing that since the baby was not born yet and that Lee Chang might become the king, zombified the King with the resurrection plant and used the excuse that he was extremely sick.

By the time Season One starts, Queen Cho is the second wife of a King who is at least thirty years old than her. The King, however, has taken ill, and the queen refuses to let the Crown Prince, Lee Chang (who is the same age as her) see him and says that she doesn't want him to get sick.

When the Crown Prince continues to protest, the queen accuses him of hating her and his soon-to arrive- younger brother. She then orders the maids and the servants to escort him away immediately and this causes the prince to realize that the Cho Clan has influenced more corruption in the palace.

Queen Cho and her father states that they must keep the King's undead condition as a secret from the public and the prince, and that if the public were to know, it will result in the entire plan failing. However, an anonymous message is put up revealing that the King is dead. Minister Cho, Queen Cho's father and the head of the Cho Clan, retaliates to this by manipulating all the ministers and the court into punishing and torturing the medical students, as he suspects that; the royal physician is the only outsider to know about this plan, one the medical students might know about such message [It is presumed that he and the queen executed the medical students for treason.

With the Queen declaring herself "Queen Regent", the queen and her father, Minister Cho, are at subtle odds at each other, and Minister Cho threatens that he was the one who gave her her power and that he can "take it away at any time". A quote that the queen to great offense to and felt insulted by.

After the Prince Lee Chang and his faithful companion, Mu-Yeong, seeks out the Royal Physician in charge of the King's health, the Queen and the rest of the Cho Clan seizes this opportunity to frame the prince and states that he is a criminal wanted for high treason. The zombie infection has also spread entirely around the south of the country.

The Queen and the rest of the Cho Clan discovers the location of the prince and orders soldiers to arrest and kill the prince. In the efforts to do so, kills many villagers and soldiers, but the prince and his right hand escapes.

In the palace, Minister Cho, the Queen's father, forces the minsters to submit to his plan by showing them the infected king. The Queen, meanwhile, knowing that the prince is hiding in the neighboring cities and the zombies are at every single perimeter of the south part of the peninsula, order a "Quarantine" and locks up every city gates, rendering the prince's escape impossible.

The Prince and his forces still infiltrate the gates of Han-Yang, where the palace is and gains support from some of the wealthy ministers and politicians of Han-Yang, he also kills the zombified king and the army discovers Minister Cho's plot and allies with Prince Lee Chang. Meanwhile, the Queen, realizing that her father is controlling her, poisons him with Tea. Whilst, the Prince, goes to take down the Cho Clan and the queen.

Even though the maids beg the Queen to flee, as the Prince is making his way up to arrest her, she refuses and states that it's "time to greet him again". When the Prince enters the throne room and tells her to give up peacefully, she laughs and dares him to "kill her and her son".

However, the minsters, now joining Prince Chang's side again, confirms that the Queen ordered and kidnapped many pregnant women to be brought up to the palace and give birth there, as her own child died in a miscarriage, which was something that her and her brother tried to hide from their father.

She angrily refuses this claim, but knowing that her reign is almost over, orders her loyal maids to allow the zombies, which she had collected beneath the palace, to be set free. This results in all of the ministers being infected, as well as all of the maids and the servants being infected as well.

While it seems like it is safe in the secluded throne room, the zombies quickly begin breaking down the doors of the throne room. The queen vacantly stares with her kidnapped child in her arms, while the Prince Lee Chang's soldiers are torn about before her. She stands up addressing to her deceased father whom she killed stating, "Are you seeing this father? They didn't take anything away from me".

The zombies, after finishing killing everyone else in the room except Seo-bi, who escaped from the dungeons earlier, begins running towards the queen. The zombies run towards her throne and she commits suicide by letting them tear at her, still showing the same vacant look on her face as the infected pile all over her.

Prince Lee Chang, and a handful of his forces knowing that if the infection were to escape the palace, it would infect the entire world, creates a plan to drown the zombies, who can't swim, in the frozen lake by the royal garden.

As they fight the hoards of zombies coming from the palace, the zombified Queen, now infected, is also seen running amongst the hoard to Lee Chang and his forces. Lee Chang, Yeong Shin, and their soldiers are overwhelmed by the large numbers of the infected. Prince Lee Chang, using the weight of a particularly large zombie, breaks the ice, causing the zombified queen, along with the rest of the zombie hoard to fall and drown in the waters.

When day strikes, the survivors salvage for ID cards amongst the dead bodies so that they know who has been infected or killed. Amongst the piles of ID cards, the queen's large phoenix sculpted golden hair pin is shown, signifying that the Cho family's reign is over. 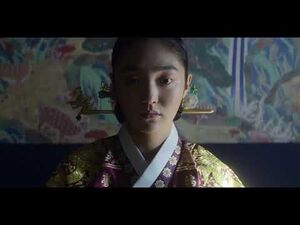