Queen Clementianna (simply known as Clementianna or The Queen) is the main antagonist of the 2012 Fantasy film Mirror Mirror.

Queen Clementianna is based on the Evil Queen with her obsession of being the fairest of them all. A beautiful but cruel woman, Clementianna stole control of the kingdom and ruled it focusing only on having lavishes balls and cared only about her beauty and not the needs of the people and taxed them out of what little money they had left. The Queen hated her stepdaughter Snow White whom she locked away in the castle and forbade her from ever leaving her room, and planned on marrying the much younger Prince Alcott so she could gain control of both kingdoms.

She was portrayed by Julia Roberts, who also portrayed the younger Queen reflection in the Magic Mirror.

Queen Clementianna is selfish, cruel and vain. She always taxed the people in her kingdom of all the money they had and used it to throw lavish parties. The Queen was so obsessed with her beauty that she had undergone a strange and repulsive beauty regiment involving insects and bird droppings.

The Queen took really care of her appearance. She had long red hair that she always kept up by tying it up in an elegant hairstyle most of the time and had cold blue eyes that looked like ice chips. She wore large flowing ballgowns with patterns and bows and puffy sleeves.

After his wife passed away giving birth to their daughter Snow White, The King met and married Clementianna which made her Snow White's stepmother. One day the King went to war fighting a great evil that invaded the land leaving Clementianna and Snow White in the castle. Queen Clementianna ruled in his absence and kept Snow White locked in the palace. Secretly, Clementianna had cast an enchantment on the King which turned him into a monster that only the Queen could control for her own evil needs through the use of two moon charm necklaces.

Many years later, as the undisputed ruler of the kingdom, the Queen had total control over everyone and everything, including the Princess Snow White, who she forbids from ever leaving her room or the palace. The Queen had a party thrown with the Baron from a neighboring kingdom to discuss her money problems and stated the solution to her problem is to marry him, which greatly disgusted her. Clementianna noticed Snow White out of her room and threatened her to never sneak into another party again.

The Queen later goes to her bedroom and behind a locked door, a large mirror hangs. Clementianna stands in front of her mirror and recites "Mirror, Mirror on the wall" when it suddenly became a liquid portal and the Queen stepped forward towards the mirror and is taken to the Mirror Realm a world where there is a huge lake and a large wooden tiki hut and inside there are mirrors filled all around the room. Clementianna consults with the Magic Mirror, a younger reflection of herself, to rant about the Baron's marriage offer. The Mirror states that the Queen had spent much time on her vanity and advises her to marry someone fast and foretold that the Queen will ask the Mirror who the fairest of them all is and won't like the answer.

The following day, while purchasing shoes, the Queen is summoned to the throne room and meets Prince Alcott of Valencia and realizes he comes from a wealthy kingdom. The Prince tells the Queen that he and his servant were robbed by bandits that have been plaguing the Royal Forest (Secretly the Seven Dwarfs). The Queen then decides to throw a wonderful masquerade ball in order to woo him into marriage and solve her kingdom's financial problems. She proclaimed an order of the town's Magistrate to tax the poor townspeople to pay for the ball. The Queen underwent a repulsive beauty regiment involving insects and animal feces to make herself young and glamorous.

During the ball, the Queen wanted to dance with the Prince but instead is partnered with the Baron and other suitors while the Prince dances with Snow White. Angered that the Princess has sneaked into the party, she has her loyal manservant, Brighton, bring Snow to her. Snow White admitted she left the palace and saw how the once-happy townsfolk are miserable now. The Queen at first taunts the new confidant Princess but when she chastised her as the real leader of the kingdom, Clementianna became enraged.

Clementianna retreated to her bedroom and stated she wanted the Princess killed as she was a threat to her claim to the throne and ordered Brighton to take Snow White into the forest and feed her to the beast, which he sadly complies to. Later, Brighton returns telling the Queen that the deed was done and brought a bag full of organs impressing her. She and Brighton later inform the palace staff of Snow's untimely death, and ordered Brighton to collect the taxes from the town to pay for the ball thrown the previous night.

Queen Clementianna later dines with Prince Alcott and informs him that Princess he encountered at the ball was Snow White and has recently died, shocking Alcott. As the Queen attempted to propose to Alcott, Brighton entered the room interrupting them and informs the pair that the funds were stolen by bandits in the forest. Prince Alcott decides to fight the bandits and retrieve the money himself and leaves the palace and learns Snow White is really alive living with the bandits and returns to the Queen's palace with the news. At first the Queen laughed at the news and said it was impossible, but after Alcott's constant assurance, she ordered everyone out of the room except Brighton and stated her day was ruined.

The Queen later returned to the Mirror Realm and speaks with her Magic Mirror and learns that what Alcott said of Snow White being alive is true. Enraged, she orders the Magic Mirror to kill Snow White with magic and to punish Brighton for lying to her. The Magic Mirror warns her of the price of using dark magic, but refuses to listen and Brighton is temporarily transformed into a cockroach. Clementianna than requests for a love potion, similar to the one she used on Snow White's father the King, to make the Prince fall in love with her, which the Mirror grants though warns her again of the price of dark magic.

The Queen later meets with him and gives the Prince the love potion during a toast to the late King. The potion works but turns out to be a 'puppy love' potion and he becomes devoted to her like a puppy dog. Under the spell, the Prince agrees to marry the Queen.

On the day of her wedding, the Queen has difficulty getting into her grand wedding dress when Brighton, who transformed back into a man, helps her get into it and the two share a carriage ride where Clementianna shares her excitement of her wedding, even though she's already been married. Arriving at the wedding, she finds all her party guests to be in their undergarments and her groom missing. The Baron informs her that the Gentry, the ruling government of all kingdoms, want Clementianna removed from the throne as she was unable to to handle the bandits and lied about Snow White's death. The Queen than asks for her prince only for the royals to tell her that he's gone and Snow White has him. Enraged, the Queen whispers to Brighton that if you want someone dead you must do it yourself and leaves the wedding.

The Queen leaves the palace on a horseback covered in a cloak with a hood on and races toward the forest. There she confronts Snow White and reveals to her that the terrifying beast, that is terrorizing the forest, is under her control and sets it loose upon her, Alcott, and the Dwarfs and tells Snow White to die well. The Queen laughingly returns to the Mirror Realm to watch Snow White's death. Clementianna than begins to narrate to the Magic Mirror that a dark magic invaded the land and said that the Queen realized if she wanted to be the most beautiful in all the land, that Snow would have to fall.

The beast than captures Snow White but hesitates to kill her and she sees that the beast wears a necklace with a moon charm on it similar to what the Queen wears. Snow cuts the necklace chain off causing the beast to be engulfed in light and transformed back into the King. Inside the Mirror Realm, the Queen feels what has happened by touching her glowing moon charm necklace and looks at her hand which is aging and spotting liver spots. The Queen than begins aging rapidly in the face and hair. The Magic Mirror than asks Clementianna if she's ready to discover the price for using magic, which the Queen finally realizes what it was.

At Snow White's wedding celebration, an old crone dressed in a flowing robe with a large hood appears and offers Snow White a poisoned apple as a wedding gift that Snow White graciously accepts. The crone than asks for one bite to bring her good fortune as she is the fairest of them all. Snow White, as she is about to take a bite, realizes the crone is the former Queen. Snow White than pulls out her knife and cuts a piece of the apple and gives it to the Queen and tells her the importance of knowing when you've been beaten, a line Clementianna once told her.

Accepting her defeat, the Queen takes the apple piece and eats it. As the Queen consumes it, the Magic Mirror declares that it was Snow White's story after all. The Magic Mirror than suddenly shatters along with all the other mirrors until the entire Mirror Realm itself is destroyed.

Inside the ballroom, the Queen's body seemingly vanishes after eating the apple leaving only her cloak which fell to the ground and disappeared and the party guests cheered. Snow White later sings with the King, Alcott, Dwarfs and the party guests and dance throughout the wedding celebrating and the Queen's winter spell, that she presumably casted, is broken, ending her reign of evil for good.

The Queen in front of her portal

Clementianna returns to the Mirror Realm

The Queen ages into an old hag

The Hag consumes the apple 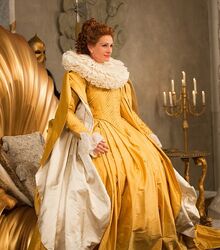 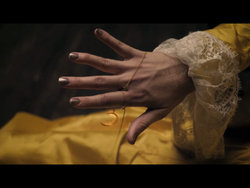 Clementianna's young hands are about to age... 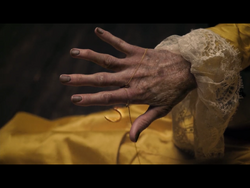 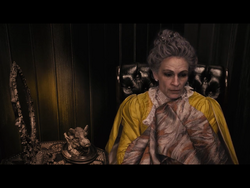