Transform everyone in Dreamland to stone (succeeded, save for King Zøg and Prince Derek).

Ensure that Princess Bean "achieves her destiny" by sacrificing her so that she can marry into hell's royalty (ongoing).

Queen Dagmar is the main antagonist of Matt Groening's fantasy comedy show Disenchantment. She is the queen of Maru kingdom, and is the mother of the main heroine, former princess (now queen) Bean.

She is voiced by Sharon Horgan.

Early childhood and life prior to Zøg and Dreamland

It's revealed in the episode "The Disenchantress" that Dagmar was born into the royal family of Maru as the firstborn child and eldest daughter, along with her younger sister, Becky, and her two younger brothers, Cloyd and Jerry.

At the age of 19 years old, she murdered both her parents for unknown reasons, presumably with her siblings Becky and Cloyd. In fact, she actually lied to her daughter about that they died in double murder and suicide.

Maru had a unkown prophecy involving an unborn princess, who would be brought to this world from two royal families (one side of the Maru royal family, and the other side of the Dreamland royal family), and later grow up to be sacrificed in a ritual to pay off the debts of Hell that Maru owed, due to prior bargaining with the Underworld.

Dagmar was sent on a mission to Dreamland to get married in to the other royal family and give birth to the princess, so that the prophecy could be fullfilled.

According to her ex-husband, Dagmar was the daughter of a noble from a far away land. However, her servants from her homeland refer to her as their queen so it's possible she mislead Zøg about her origin.

Dagmar first meet her future husband Zøg at a tournament where he instantly fell in love with her. The two soon married and had a happy life together. Their lives became even happier when Dagmar gave birth to their first and only daughter, the princess Tiabeanie, better known by her nickname Bean.

A few years passed before one evening, while Dagmar was playing with a 5-year-old Bean, Odval brought in a tray of wine and grapes. While Bean and Zøg were not looking, Dagmar slipped a poison into Zøg's goblet but as she got up to suggest making a toast, Bean rotated the tray so as to reach a grape, switching goblets in the process. This caused Dagmar to drink the poisoned wine intended for Zøg and as a result she was turned to stone. Zøg shielded a frightened Bean from the sight, causing Bean to think that her mother died naturally, rather than being petrified.

Zøg had Dagmar placed inside the Church and lied to Bean that the statue that was really his wife was her memorial. Grief stricken by the loss of his wife, Zøg vowed to create the elixir of life, believing it could revive Dagmar, completely unaware that she had tried to turn him to stone.

Dagmar spent the next 15 years as a stone statue. Durring this time, Zog remarried and his second wife, Oona of Dankmire, gave him a son, Derek.

Without her mother, Bean was primarily raised by her nanny Buntie, and a group of drunks at local taverns. As a result, Bean grew into a rebellious and alcoholic but kind and brave girl.

On her wedding day, Bean befriended Elfo, an Elf who left his home because he was tired of being jolly all the time, and Luci, a demon who unbeknownst to Bean, had been sent to turn her evil. With their help, Bean was able to call off her unhappy arranged marriage and from then on, the trio went on a series of comedic misadventures.

But since Elf blood was one of the ingredient's needed to create the Elixir of Life, Zog saw Elfo as his chance to revive Dagmar as his marriage with Oona was unhappy. Elfo was kept around as a test subject for the Elixir but after repeated failures to create it, it was discovered that Elfo was not a real elf. Bean, Elfo and Luci traveled to Elfwood where Elfo learned that he was a half-elf. However Zog'a army has followed the trio to steal elf blood. Though the trio helped the Elves defend their home, Elfo was shot by an arrow and died in Bean's arms.

Heartbroken and furious at her father for murdering her friend and seeking the Elixir, Bean disowned Zog only to learn that Zog was not trying to create the Elixir of Life to become immortal, but to revive Dagmar, and learned that that her mother's memorial was really Dagmar turned to stone. Bean was distraught by the thought that she was responsible for turning her mother to stone and created the Elixir using the Vial of Immortality (Which she had obtained in an earlier episode) and after some uncertainty about whether or not to resurrect Elfo or Dagmar, chose to revive her mother.

Upon her revival, Dagmar was happy to see her daughter full grown while all of Dreamland was shocked to see their former queen alive. Zog was overjoyed, but Dagmar's return created conflict with Oona, the queens even got into physical violence at Elfo's funeral resulting in Elfo's body being cast into the ocean. With all the Kingdom outraged at Oona, she vanished in the evening, while one by one the people of Dreamland began to turn to stone. Bean, Zog and Luci immediately suspected that Oona was the culprit but in truth, Dagmar had been turning people to stone using the same potion that she had tried to use on Zog. At the same time, Dagmar spent more time with Bean allowing mother and daughter to form a strong bond, however it was all manipulation to get Bean to trust Dagmar.

One evening, as Bean asked a crystal ball where Oona was, magic lighting shot from her fingers. Dagmar brought Bean to a secret room hidden in a tower where she revealed to her daughter that this was the start of a great change. At the same Time, Zog with the help of Luci used the crystal ball to reveal that Dagmar had poisoned the wine meant to turn him to stone. Horrified and angered by his wife's treachery, Zog discovered the secret room and confronted Dagmar. Dagmar told Zog that this was beyond anything he could imagine, a dark battle of 1,000 years and Bean's destiny. With that she kicked Zog down the stairs and unleashed her potion on all of Dreamland, turning everyone to stone. The only people who survived were Zog, Derek (who had been sealed in the tallest tower for his safety) and Luci who she had previously caught. Dagmar then kidnapped Bean and brought her aboard a ship filled with goblins, orcs and other monsters who called Dagmar their queen and set sail for her homeland.

During the trip to Maru Oona entered the ship and tried to warn Bean but was caught by Dagmar's guards. Dagmar then ordered her guards to chain her to some anchors and throw her back in the ocean. Oona however managed to grab Dagmar and took the vial of immortality with her.

Maru needed to fulfill a prophecy to hell and it turned out that Dagmar needed Bean to fulfill this prophecy by screwing a crown to her head and making her wear a specific dress to pay off the debt Maru owes to Hell.

However, Jerry goes in Bean's place while she goes to search for Luci. When Dagmar learns of this Jerry tries to stop them and she mortally wounds him with a hammer. When Cloyd shows himself to be apalled by this, reminding her that he was their youngest brother, Dagmar coldly tells him that now he is. Along with Cloyd and Becky she then searches for Bean and almost catches her. After Bean manages to escape the room standing at the exit and holding a candle in her hand she sees Dagmar who stands in the room which has been covered in a pool of a flammable substance. Realizing Bean could easily kill her now she tells her to do it claiming that she is as selfish as she is and casually mentions killing her parents. Bean refuses but Luci who she had previously recued, accidentally knocks the candle into the pool anyway seemingly killing her. Bean and Luci then form a plan to bring Elfo back to life wanting to meet him in hell. Before Bean can enter the pathway to hell however Dagmar reappears and tries to force her to wear the crown but is knocked unconcious by Jerry before he succumbs to his injuries.

Dagmar initially appears as a kind, sweet and understanding woman. But beneath this facade is a manipulative and cunning woman who uses her wiles to sway people into trusting her. She was able to gain her daughter's trust by playing on her fondness for drinking and by framing Oona for crimes against Dreamland.

Even once Dagmar had Bean as her prisoner, she continued to play the role of a sympathetic and trusting mother. But once Bean learned that Dagmar intended to sacrifice her for reasons unknown, Dagmar dropped her facade and revealed her true monstrous nature. She forcibly attempted to murder Bean, and even though Bean escaped, Dagmar continued to torment her daughter in her nightmares. What the sacrifice will ultimatly do, remains a mystery.

She also seems to care little for her siblings looking down on Cloyd and Becky and dismissing them as useless as well as murdering Jerry in cold blood when he tried to stop her. 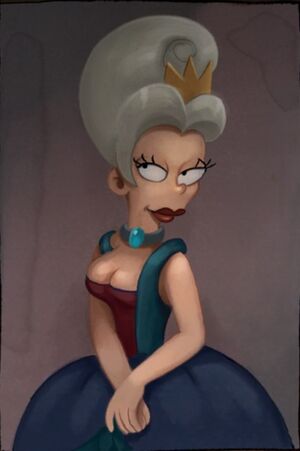 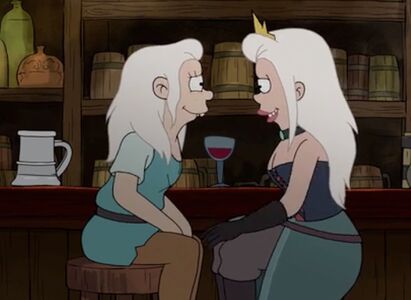 Dagmar with her daughter

A younger Dagmar with Bunty and Odval 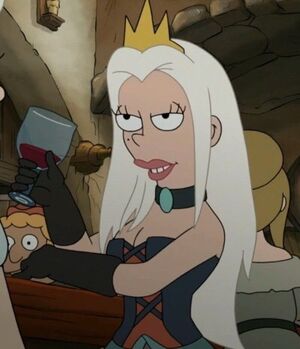 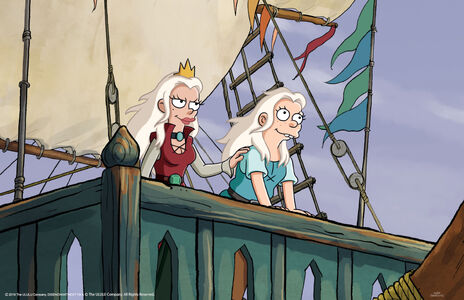