Queen Entozoa (simply known as Entozoa) is an antagonist in the Wander Over Yonder episode, "The Fancy Party". She was the villainous queen who was dying, so she hosted a party and said that she would bequeath her power to the toughest of all villains. In the end it is revealed that her "power" and true identity was a slug-like demon that was possessing her body for 1,000 years and needed to switch bodies so it could possess a new body for another 1,000 years, however, it accidentally became a sandwich for 1,000 years due to Wander's meddling.

She was voiced by Rich Fulcher.

It is known that (as a member of royalty and because she was possessed) Entozoa is intolerant with weakness and desperation, and is very picky about manners (unless rid of them indicative of a high degree of power and/or defiance). What she was like 1,000 years ago before being possessed by the slug-like demon is unknown, however, since she was chosen as the creature's host, it can be assumed that she was an evil villain. While Sourdough was possessing her, she often acted like a feeble yet ruthless old woman who admired power and notoriety above everything else.

Althought he isn't actually a villain, Entozoa had invited Wander to her party because he is the "number one most wanted fugitive in the galaxy" thus doing that turn him a villain.

During the party, she initially didn't like Lord Hater and was constantly annoyed by his attempts to win her over, such as singing her a sappy mushy love song, but after seeing his ruthless display of power, she seemingly grew "fond" of him (but in actuality she became fond of his power).

She was originally going to give Wander her power but instead, Lord Hater proved to be more gruesome and rebarbative, so she gave him her power. It turns out that her "power" was a slug-like demon which had taken over her body 1,000 years ago and was the true puppet master of the queen and it planned to take over Hater as its next host. The slug then entered Hater's mouth, choking him, so Wander did the Heimlich to save him, causing the slug demon to be spat out and land into a sandwich, causing it to become Sourdough the Evil Sandwich. 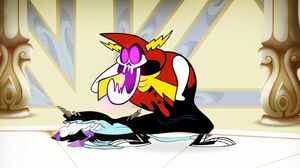 Entozoa's death.
Add a photo to this gallery

Retrieved from "https://villains.fandom.com/wiki/Queen_Entozoa?oldid=3551741"
Community content is available under CC-BY-SA unless otherwise noted.