Member of Order of Zugzwang

Queen Ferz is a purple cyclop that wears green tonga

Ferz is the gatekeeper of Crocodilopolis.  She guards the entrance of the castle, and when encountered by the heroes, she used illusion to impersonate the hero's mother, Mada to make the heroes join the Order of Zugzwang. However, the hero doesn't join the order. So Ferz transform into a cyclop and fight the heroes, but is defeated. With her last breath, she tell them that they can't defeat King Korol. 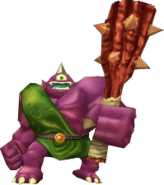 Queen Ferz in PS2
Add a photo to this gallery

Retrieved from "https://villains.fandom.com/wiki/Queen_Ferz?oldid=3564893"
Community content is available under CC-BY-SA unless otherwise noted.