Turning the fairies and the humans against each other.

Curse her husband King John for forcing her to stay in her current fate (succeeded, but ultimately failed).

Start a war between fae and man (succeeded).
Kill Maleficent (temporarily succeeded, but Maleficent was revived by her Phoenix powers).
Kill all of the fairies.
Take over the Moors.
Turn the humans against the fairies (all failed).

Queen Ingrith is the main antagonist of the 2019 Disney fantasy film Maleficent: Mistress of Evil. She is the (former) Queen of Ulstead, wife of King John, mother of Prince Phillip, and Princess Aurora's future mother-in-law who claims to kill the fairies as revenge for her brother's death. She is based on the Ogress Queen Mother from Charles Perrault's Sleeping Beauty.

She was portrayed by Michelle Pfeiffer, who also played Catwoman in Batman Returns, Velma Von Tussle in Hairspray, Eris in Sinbad: Legend of the Seven Seas, and Lamia in Stardust.

Queen Ingrith is seemingly willing to protect her people, and for her, the ends justify the means. However, the fact is she's wicked, spiteful, genocidal, warmongering, cunning, selfish, and is driven only by racism and hatred towards the Moors, which in turn leads to her aggression towards the fairies. She claims to be motivated by the tragic death of her brother, who she claims was killed by one of the enchanted forest creatures. But when Aurora promptly tells she doesn't believe her, she doesn't bother to defend herself.

Despite being a wife and a mother, she has no love for either of her relatives, shown by cursing her husband John to sleep eternally, telling him to "rest in peace forever", because he really wanted peace with Maleficent's magical kingdom, and locking away her son Phillip for trying to stop her evil plan. When Maleficent is transformed into a black phoenix, she cowardly pushes Aurora, his future stepdaughter, from a tower of the castle to ensure her escape, proving that she only cares about herself.

Diaval finds Princess Aurora to be accepting Prince Philip's proposal to marry him, informing it to Maleficent, who grows wrathful toward it, warning Aurora not to marry him out of knowing that this story of love would not end as she thinks, much to Aurora's and the other fairies' dismay, resulting Aurora escaping back into the human kingdom, in which Ingrith is deciding on taking her as her new daughter.

Maleficent arrives at the reunion, where she is using her powers to cast a new curse; where shall be no reunion nor love between Aurora or the prince, yet Aurora refuses to the spell, When the queen disdainfully proclaims that Aurora will now have a real family and mother, Maleficent gets angered and seemingly puts King John into a deep slumber.

Maleficent escapes from the castle moments before the guards arrive to take her. She flies away but gets shot down by Gerda and falls in the ocean, this resulting in her being saved from drowning by Conall, a male fairy with feathed wings like Maleficent's.

He introduces Maleficent to other fairies living in exile because of the conflict with humans. Maleficent reluctantly agrees to lead them and other Moor refugees against the humans to rescue Aurora. Another fairy, Borra, is driven more by hatred of humans than survival and wants to utilize Maleficent's powers, which are descended from a phoenix, to win the war.

Ingrith has arranged a wedding for Aurora and Phillip in 3 days, inviting creatures from the Moor (including Knotgrass, Flittle, and Thistlewit) and people from other kingdoms to celebrate, with the forest creatures going first.

Maleficent flies away to the Moors and appears shocked when she discovers all the soldiers have picked all the Tomb Blooms, magical flowers that grow on the fairy graveyards. Their pollen were mixed with iron powder by Lickspittle, a pixie whose wings have been cut off by Ingrith to create a red-colored killer dust which can revert fairies to inanimate objects or destroy them completely. Queen Ingrith intends to use it as a weapon to obliterate all fairies.

In the ensuing fight, Conall is fatally wounded protecting Maleficent. As he dies, Maleficent starts to channel the phoenix's powers within her.

Aurora discovers that it was Ingrith who "cursed" the king by pricking him with the spindle that still contains the sleeping curse that was inflicted upon Aurora. Queen Ingrith tells her she is orchestrating the war to kill all of Moor's fairies as revenge for her brother's death, claiming he ventured to the Moors many years prior. She does that by locking up the fairies in the cathedral with Gerda giving shots of killer dust via pipe organ and locking Aurora on the top floor of the castle. Flittle sacrifices herself to block the organ whilst the other fairies defeat Gerda by causing her to fall to her death.

In the following morning, Maleficent is leading the forces of the Dark Fae with Borra straightly into an invasion against the human kingdom, which leads to a massively destructive and violent lengthy battle between the factions. In the ensuing chaos, Maleficent attacks Ingrith, forcing Aurora to stop her from doing so from hearing about the good in her. Diaval transforms into a half-crow/half-bear hybrid and frees the fairies in the cathedral. Maleficent suddenly gets killed protecting Aurora from Ingrith's arrow, sacrificing herself. Unfortunately for Ingrith, Maleficent is quickly ressurected as a phoenix.

Ingrith throws Aurora from the tower to distract her enemy and tries to escape. Maleficent swoops in and saves Aurora, and they crash on the battlefield where Borra and Prince Philip are fighting against each other. The prince states that he chooses peace with the fairies and refuses to kill Borra. He orders the army to cease fighting, effectively restoring peace between the two factions and awakening John from the curse.

Maleficent returns to her human form and Ingrith falls to her supposed death, but she survives and Maleficent transforms her into a goat, much to her dismay. During Philip and Aurora's wedding, Philip notices his mother in her goat form, and Diaval assured that Maleficent can change Ingrith back. However, John stated that Ingrith should remain a goat as punishment for her crimes and that she will change back only if she learns the error of her ways. 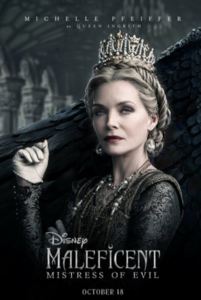 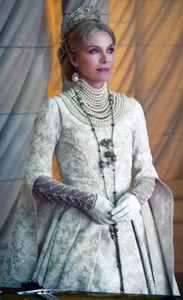 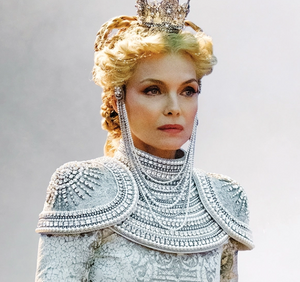 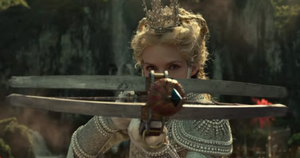 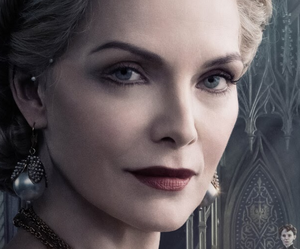 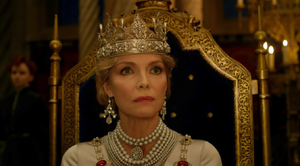 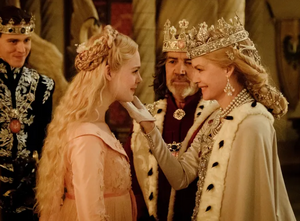 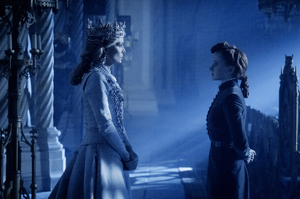 The Queen and Gerda. 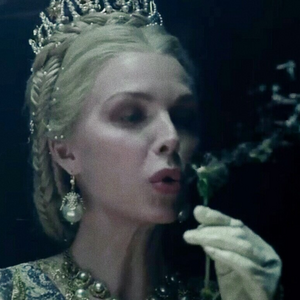 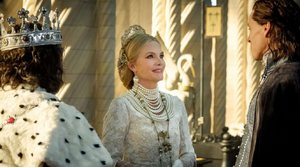 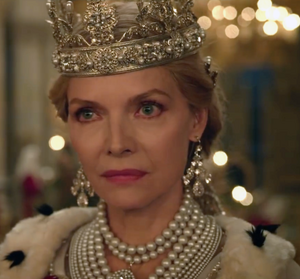 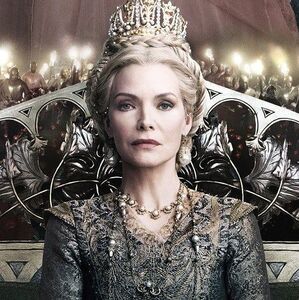 Retrieved from "https://villains.fandom.com/wiki/Queen_Ingrith?oldid=3871882"
Community content is available under CC-BY-SA unless otherwise noted.