Villain's Arbalest from a Tyrant's Insanity

Dominating dragons through force
Possessing enormous dragons at her command

Kill Reco so she could avenge the death of her son.

She was voiced by Miho Nakamura.

She is the queen of Utakata Village which is located afar from Reco's village Hoshifuri, and is the subjugator of dragons who uses the said beasts to guard her castle. One day, the Koujuu (giant insects) from Shinjuga Forest attacked Utakata village suddenly and unexpectedly. Aki, Larsa's oldest son and her favorite, volunteered to go to war against the Shinjuga Koujuu to defend his mother and her kingdom. However, the war dragged on and Aki decided to go to Shinjuga Forest alone and take the fight to the Koujuu's home ground.

Shortly after the Koujuu's attacks on Utakata Village ceased, but Aki did not return. Fearing for Aki's safety, Larsa dispatches reconnaissance detachment to Shinjuga. The reconnaissance arrived in the forest just in time to witness Aki dying in Reco's arms. The reconnaissance unit hastily returned to Larsa's castle and reported what they saw. Thinking that Reco was responsible for her Aki's death (which was not the case, as Aki sacrificed himself so Reco could become the goddess of the Koujuu to protect humanity), Larsa was livid with fury.

Blinded with rage and with only vengeance in mind, she forcefully tamed dragons and sent them after Reco, along with her unsuspecting youngest son Palm with the promise of kingship. But with six more sons to replace Palm, she sent him to his death and actually expects Palm to die since she only favored Aki and knowing the poisonous atmosphere of Shinjuga Forest would kill him.

After much fights and misadventures, Palm ends up allying himself with Reco to stop his mother. As the two make their way into her castle, they attempt to convince her that Reco was a good person and not responsible for Aki's demise. Larsa, too blind with her rage, refuses to reason with them. After coldly sentencing Reco and her own son to death, Larsa promptly attacks them with a massive golden dragon called Dragon Emperion. Following a brutal final battle, Reco and Palm destroy Dragon Emperion, killing Larsa with it. However, if the player beats God Mode without having to use a continue, Larsa transforms into Spiritual Larsa, empowering herself with the Koujuu's energy force. Upon defeating her, Larsa calls out Aki's name before falling from the sky to her death.

Following Larsa's death, her castle was abandoned and reduced to ruins. Despite her downfall, Larsa's impact drove the Koujuu Hakugin into brainwashing the Koujuu to destroy humanity out of anger from Larsa using it as a subject to experiment the Koujuu's powers. 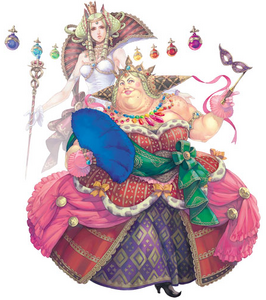