Queen of the Machine Empire

Fanning herself with her metal fan.

See the Machine Empire succeed in its goals of conquest.

Queen Machina (simply known as Machina) is the tyrannical queen of the Machine Empire and the secondary antagonist from Power Rangers Zeo, as well as a minor antagonist in Power Rangers In Space. She usually carries a metal fan with her.

She was voiced by Alex Borstein, who became famous for her work on MADtv and Family Guy, where she voices Lois Griffin.

The Machine Queen is the devoted wife and married to King Mondo, Queen Machina is forever faithful to her evil husband. Like her husband, she has a heart of pure, cold steel. They share a lust for hate against the Zeo Rangers which grows more and more each day. Machina is dedicated to Mondo's quest for universal domination by machinery. Along with the rest of the Royal House of Gadgetry, Queen Machina came to the moon after deciding to use it as a staging ground for the empire's invasion of Earth.

The Queen is elegant and refined and her insanity is quite reserved and its always there, lurking behind her so respectable mask of sophistication. After Lord Zedd and Rita Repulsa were driven off of the moon, Queen Machina stated that they needed to recapture the two. She has a hard but humorous attitude towards situations and loves getting revenge on her enemies. Later, when King Mondo decided to use the Sword of Damocles again, she expressed concern since the sword destroyed him before.

After he was destroyed and Louie Kaboom took over, Queen Machina found him constantly trying to woo her, but she constantly refused his advances. She was delighted to see the return of her son, Prince Gasket, and her daughter-in law, Archerina.

However when King Mondo was rebuilt, Queen Machina instantly took to his side and helped to drive out Gasket. She was later blown to bits along with the other members of the Royal House of Gadgetry at the end of Zeo by a bomb planted by Zedd and Rita.

Machina and the others were rebuilt by the United Alliance of Evil and they attended the alliance's meeting on the Cimmerian Planet. Machina also took part in Dark Specter's invasion of the universe and accompanied her husband and General Havoc to the Phantom Ranger's home planet and attacked it. However, she was destroyed once again by the energy from Zordon's shattered energy tube and was destroyed for good. 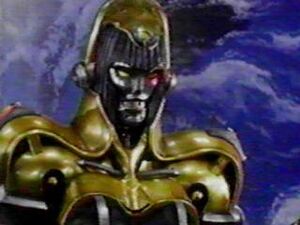 Retrieved from "https://villains.fandom.com/wiki/Queen_Machina?oldid=4127863"
Community content is available under CC-BY-SA unless otherwise noted.