Queen of the Metroids

Killing anything that harms or threatens her baby Metroids.

Kill Samus Aran and let her Metroids take over the universe.

The Queen Metroid is the final form of a Metroid's life cycle, as well as the largest and most powerful variant of the species.

Only two Queen Metroids have appeared chronologically in the Metroid series; the first Queen appears as the main antagonist of Metroid II: Return of Samus and its remake Metroid: Samus Returns, being the final boss in the former and the penultimate boss in the later. A second Queen, born out of cloning from an offspring of the first, appears in Metroid: Other M as the penultimate boss (third to last if counting Phantoon in the epilogue).

The Queen shares the structure to a crocodile or tetrapod dinosaur, as she has a long snout filled with sharp teeth and crawls on four legs. She has two pairs of four blue eyes, armored platings on her back, and a translucent belly. Similarly to other Metroids, her weak points are her head, mouth, and stomach, which the latter can be damaged by Bombs or destroyed by a Power Bomb from the inside.

Much like an ant or bee colony, the Queen Metroid reproduces the entire species, and only a few Metroids are born with the specified genetic coding to eventually mutate into a Queen. The Queen does not appear to require a mate to create descendants, making her (and likely the entire species) parthenogenetic.

In Metroid: Samus Returns, the Queen's appearance is slightly altered, giving her an armored carapace, side jaw flaps, two pairs of six red eyes, spikes on her forelimbs, and a tail, which she lacked in previous games. Her uvula also has a more spike-like shape, making it more noticeable when using the Grapple Beam on it.

Much like the rest of the species, the Queen Metroid is a destructive parasitic predator that desires to kill anything in sight. Although, she shows a more protective side to her offspring, given how she is the only member of the species who would nurture the young. Because of this and the fact that only one Queen can exist in a nest at a time, her hostility is extreme compared to other Metroids, as she is willing to slaughter or devour any living being that stands in her way of protecting her offspring. The Queen is also willing to kill other Metroids, even her own offspring in certain situations.

During Samus Aran's mission on SR388 to eradicate all of the Metroids to prevent them from endangering the universe, the Queen Metroid was the last Metroid left for Samus to terminate, located in the deepest confine of the cavern complex of the planet. After killing the Queen, Samus witnesses the birth of the last Metroid egg, but kept it with her as she left the cavern.

In the remake of Metroid II, Samus once again locates the Queen Metroid resting in the deepest corridor of SR388 and engages it in a fierce battle to kill off the Metroids for good. In this game, more of the Queen's abilities can be seen, as she is able to spew out a red laser beam and green clots of poisonous gas from her mouth, with her eyes and throat changing to bright red or green to indicate which one she is about to fire out. She is also able to breathe out a large amount of air in an attempt to blow Samus into a wall of fire caused by the laser or into the poison gas. Occasionally, the Queen will attempt to bite Samus, but at the right sync, Samus can Melee Counter the Queen's attack and use the Grapple Beam to open the Queen's Mouth, allowing her to fire into the Queen's mouth, or enter said mouth using the Morph Ball and use bombs or a Power Bomb within the Queen's stomach. Three Power Bombs are all it takes to take down the Queen. As with all of the other Metroids in the game, the Queen disintegrates upon death.

Oddly, even though Metroid: Samus Returns is a remake of Metroid II, the Queen is not the final boss of the game, as that title instead goes to Proteus Ridley, who is fought as Samus makes her way back to her ship with the Baby Metroid.

During the events of Metroid: Other M, Metroids were cloned from fragments of the Baby Metroid on Samus's suit after it was killed by Mother Brain in Super Metroid, and propagated in Sector Zero of the BOTTLE SHIP. The first cloned Metroid matured into a Queen, meaning that the Baby was actually an infant queen. The Queen and all of the other Metroids were nurtured by MB, an Android built with the information and personality of Mother Brain. The Galactic Federation left the Queen's genes unaltered so she would produce normal Metroids for the Federation to conduct experiments on.

Though not fully seen until her boss fight, the Queen's presence can be hinted in the cutscene where she killed Ridley's clone when it ventured too close to her chamber and absorbed its life force, as well as some of its powers, including Ridley's signature fire breath.

After the destruction of Sector Zero, Samus comes across Room MW, and finds Madeline Berman in the next room through a glass window. Madeline mistakes Samus as an agent sent to assassinate her and in a panic, opens the Queen's chamber. When Samus ventures inside, she finds hatched Metroid eggs, and immediately realizes the presence of the Queen Metroid as the latter appears right in front of her and roars.

The Queen deploys six Metroids (first one, then two, and last three) from small holes on her back and slams on the ground when Samus freezes them with her Ice Beam. Once all six of the Metroids are destroyed, the Queen grows crystalline spike platings on her head and neck and sprays a flammable breath at Samus. However, she seems impossible to beat as she grows a second planting once all of the first plates are destroyed. Samus, remembering the kind words of Adam and Anthony, uses Concentration and prepares to fire at the charging Queen, but is interrupted when the ship's emergency brakes activate, throwing them both on the ground. Samus takes the opportunity to shoot at the Queen's unprotected belly, and quickly enters the Queen's mouth via the Grapple Beam as she charges a powerful variant of her fire breath. Samus then allows herself to the use of Power Bombs to create a massive explosion from inside the Queen's stomach and obliterate the nucleus, thus killing the Queen.

The Queen Metroid appears in Super Smash Bros. for Wii U as a Trophy. Her design is based on her appearance from Metroid: Other M.

The Queen also appears in Super Smash Bros. Ultimate as a grab-type primary spirit. Her design is based on her appearance from Metroid II: Return of Samus. Despite her spirit being a legend-class with immense power and three support slots, her ability restricts jump height. Her spirit battle is a Stamina battle against King K. Rool on Brinstar, who grows in size and increased power upon losing enough health. 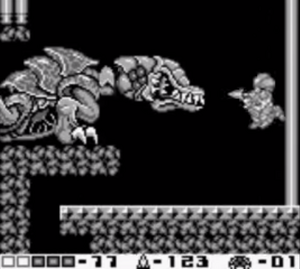 The Queen Metroid in Metroid II. 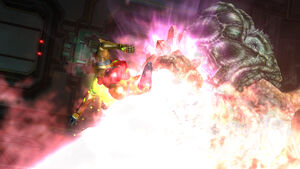 The Queen Metroid spewing purple fire from her mouth at Samus. 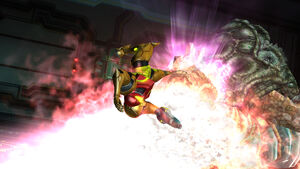 Samus using her SenseMove to dodge the Queen Metroid's flames. 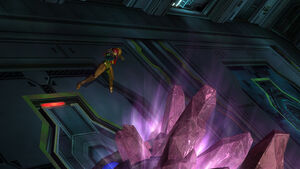 Samus watching as the Queen Metroid sprouts new crystals on her spine. 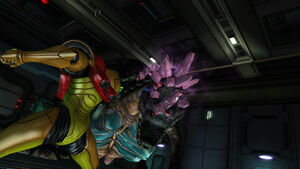 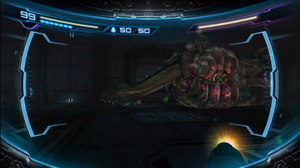 The Queen Metroid attempting to stand back up. 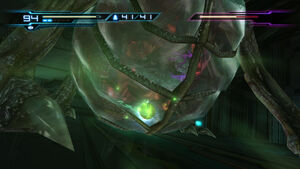 Samus using Power Bombs on the Queen Metroid's stomach, reminiscent of the battle in Metroid II. 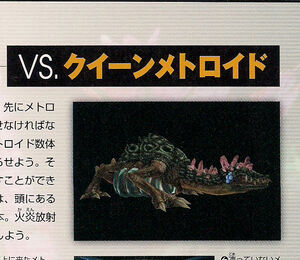 The Queen Metroid in the Japanese guide of Metroid: Other M. 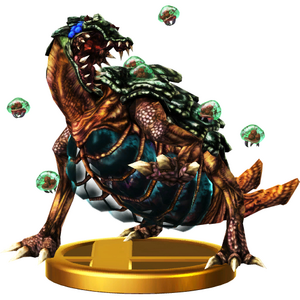 The Queen Metroid's trophy in Super Smash Bros. for Wii U. 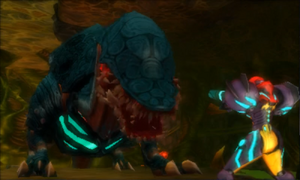 The Queen Metroid as she appears in Metroid: Samus Returns. 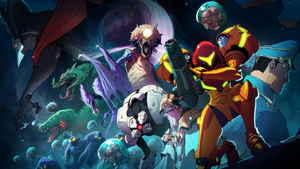 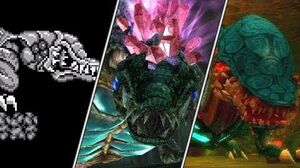