Prevent her stepson Prince Edward from marrying anyone in order to remain queen of Andalasia.

Continue ruling the enchanted kingdom of Andalasia until her death.
Prevent Giselle from finding her true love (all failed).

Queen Narissa (simply known as Narissa) is the main antagonist of Disney's 2007 fantasy film Enchanted. She is the stepmother of Prince Edward and the archenemy of Giselle.

She was voiced and portrayed by Susan Sarandon, who also played Coco LaBouche in Nickelodeon's Rugrats in Paris: The Movie.

Queen Narissa is a combination of several Disney villains, notably the Evil Queen and Maleficent - she was the reigning Queen of Andalasia, a fantasy world based on the traditional animated movies of Disney: she does not want her stepson Prince Edward to marry Giselle, because it would cause her to lose her place on the throne and plots to get rid of her by sending to a place where there are no happily ever afters: modern day New York City.

Narissa achieves this by disguising herself as an old hag and throws Giselle into a magic well - which transports her to the real world, however when Prince Edward finds out and goes after Giselle, Narissa has her assistant, Nathaniel go after them but grows increasingly angry at his failings every time. Eventually, Narissa decides to enter the real world herself and deal with things, since Nathaniel seems incapable of doing so (in truth Nathaniel was starting to doubt his own purpose and would ultimately redeem himself).

Narissa manages to trick Giselle into eating a poisoned apple (once again taking the form of the same hag) during a ball before revealing herself to the crowds. She mocks Prince Edward and Robert by saying that Giselle shall die by midnight without "true love's kiss" - Edward tries to do so, but he fails. However, Robert agrees to do so and Giselle awakens. Narissa grows angry at this and transforms into a huge blue dragon with the intent of killing everybody else, starting by Giselle, but Robert valiantly stands between Narissa and Giselle to protect her. Narissa kidnaps Robert before bursting out of the Woolworth Building and climbing to the top where she intends to drop Robert to his death.

Giselle gives chase and after a brief confrontation, Narissa loses her grip due to Giselle's chipmunk friend Pip standing on one of her horns since he had gained extra weight. After failing to complete her shapeshifting spell, Narissa is consumed in a green glowing fire, and eventually falls to her death into the streets below where she is destroyed in a shining explosion upon hitting the ground, leaving nothing but her viscous, glowing remains.

Queen Narissa was given the best and worst traits of the Evil Queen, Lady Tremaine, and Maleficent. Despite her beautiful looks, she is a vindictive and manipulative sorcerer with black magic.

Queen Narissa is very knowledgeable in different areas of black magic, such as but not limited to: shape-shifting which she can do by saying the phrase "Speciosus, formosus, praeclarus!", electrokinesis, water communication (which she not only can do through water but other forms of liquids such as soup and alcohol). She also has the power to see where anyone is in the world (Andalasia and the real world) by casting a spell "Reperio lemma miha!" on a New York water display. She is also capable of preparing different magical spells as she makes poisoned apples. 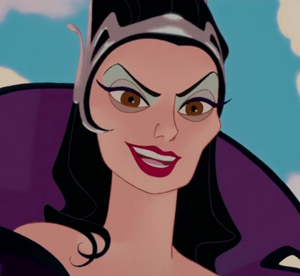 Narissa disguised as a hag.

Narissa transforms back into her normal form. 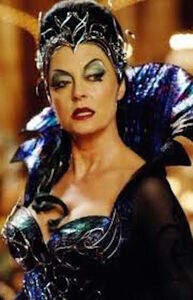 Narissa as a hag offers the poisoned apple to Giselle. 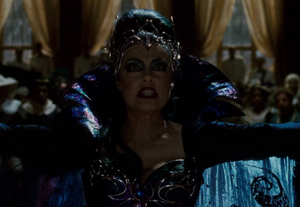 Narissa preparing to transform herself into a dragon. 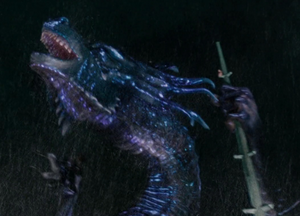 Narissa falling to her death to the street below. 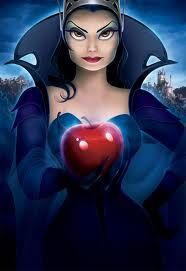 Narissa animated promotion.
Add a photo to this gallery 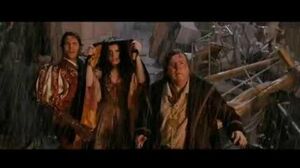 Enchanted (2007) - Final Battle
Add a photo to this gallery

Retrieved from "https://villains.fandom.com/wiki/Queen_Narissa?oldid=3983068"
Community content is available under CC-BY-SA unless otherwise noted.