Ruler of the Dead Moon

Founder and leader of the Dead Moon Circus

Liking to be young and beautiful.

Rule the galaxy (both manga, failed).
Remain young and beautiful forever while absorbing the power of the Golden Crystal.
Rule the entire universe (both anime, failed).

Queen Nehelenia is the self-titled queen of Dead Moon kingdom and the main antagonist of Sailor Moon Super S.

She was voiced by Yoshiko Sakakibara as adult and Wakana Yamazaki as a child in Sailor Moon: Sailor Stars, and Nanao in the movie in Japanese, and Kate Trotter in Cloverway dub, and Laura Post in VIZ dub in English.

Originating from the dark center of the moon, Nehelenia is one of the incarnations of Chaos alongside Metalia, Wiseman, and Pharaoh 90 that plague Usagi and her friends. During the age of Silver Millennium, Nehelenia made her presence known during the celebration of Princess Serenity's birth. When sealed by Queen Serenity during the resulting confrontation, Nehelenia placed a curse: that Princess Serenity would die before ever ascending the throne of the Moon Kingdom. This came to pass through the actions of Queen Metalia while Nehelenia lived on within her prison. While imprisoned, she came across Chibiusa's four future guardians, the Sailor Quartet, and turned them into the Amazoness Quartet, to aid her in her goals. Calling herself Queen Nehelenia, she orchestrated the attack on the realm of Elysion, placing a curse to consume the land, but it was held off by the high priest Helios, until a solar eclipse occurred, freeing Nehelenia and the Dead Moon Circus, and allowing her curse to increase in power and allowing her to capture Helios, whom she trapped in a cage in the form of a Pegasus. The curse got stronger, it began infecting Helios, Tuxedo Mask, and Sailor Moon. While Nehelenia remained in her mirror, created an avatar of herself in the form of Zirconia to command the Amazoness Quartet to seek out the Legendary Silver Crystal.

During battles with the Amazoness Quartet and their minions, Usagi's friends obtained their Sailor Crystals with the help of Artemis, Phobos and Deimos, and the Sailor Power Guardians. At the same time, Hotaru Tomoe grew in age, reawakening as Sailor Saturn and regaining her memories of her past (pre-mistress 9) giving the other Outer sailor Senshi their respective Sailor Crystals. Once the Sailor Senshi had managed to defeat all of the Dead Moon's minions, they finally discovered that the Golden Crystal was hidden inside Mamoru's body, much as the Silver Crystal was within Usagi's.

While Sailor Moon fought Nehelenia in her mirror, the Sailor Scouts damaged the mirror from outside, injuring her and releasing Sailor Moon, Chibi Moon, and Saturn, forcing the Dead Moon Circus to retreat to Elysion. The Sailor Guardians then went to confront Nehelenia in Elysion, where she attempted to take the Silver Crystal one last time. The power of the Silver Crystal, combined with that of the newly awakened Golden Crystal, bound together by the love of Sailor Moon between Tuxedo Mask, prevented this yet again. Nehelenia is then defeated by Eternal Sailor Moon using the joined powers of all the Sailor Team, ageing into a Zirconia-like form before she fades away while mirror dissolves into dust. the remains of the mirror are then sent back into the eclipse by Usagi and Mamoru as Neo Queen Serenity and King Endymion.

Placed in a more sympathic light, Nehelenia was raised on the notion that beauty is everything and lost her sanity upon seeing the hideous hag she would eventually become. It made Nehelenia obsessed with staying young and beautify forever, taking the Dream Mirrors of her subjects who were transformed as her Remless and established the Dead Moon Circus. Nehelenia desired the Moon Kingdom, seeking Helios and the Golden Crystal and only acquired the former's body before she was sealed in her mirror by Queen Serenity.

A mirror was eventually found by the Amazoness Quartet (Ves Ves, Cele Cele, Jun Jun, and Para Para), through which Nehelenia spoke to them, and she gave them power in the form of magic orbs called Amazon Stones, giving them eternal childhood and making them her servants. With Nehelenia inside her mirror, she created an construct in the form of her aged self Zirconia to oversee the Dead Moon Circus when it attacked Elysion, Helios' dream world, damaging it. Helios was imprisoned inside Nehelenia's mirror, but before she could take the crystal, Chibiusa's dream light turned his soul into Pegasus, and he left Elysion to hide in Rini's dreams.

At a solar eclipse, the Dead Moon Circus arrived on Earth and searched for Pegasus. Eventually, Nehelenia discovered that Chibiusa was the one whose dreams Pegasus was hiding in, so Zirconia imprisoned her in Nehelenia's mirror where Nehelenia forced Pegasus to become Helios again, and she took the golden crystal from him and walked outside of her mirror, destroying Zirconia in the process. She fought the Sailor Scouts, and was unbeatable with the golden crystal, but the Amazon Quartet switched it around for a pineapple and gave it to Sailor Moon. Its power was restored by everyone on Earth, and Sailor Moon used it to defeat Queen Nehelenia.

Unfortunately, Nehelenia survived and kidnapped Sailor Chibi Moon (Chibiusa), taking her to the top of the circus tent (which lifted up towards the Dead Moon), with Sailor Moon following her, but the battle destroyed her beauty, leaving her as an ugly old hag. With her plans for total domination and absolute beauty foiled, she decided to take her revenge on Sailor Moon and Sailor Chibi Moon, then seal herself back inside the mirror in the Death Moon's shadow to restore her youth. She threw Sailor Chibi Moon over the edge, and Sailor Moon jumped after her (they were saved when Pegasus turned them into their princess forms with wings). Nehelenia, believing she had defeated Sailor Moon, reentered her mirror, restoring her youth and beauty once more, and left Earth in it, never to be seen again.

Later, she was awaken by Sailor Galaxia and manipulated to attack Sailor Moon and her friends. She managed to corrupt Endimion with a piece of her broken Nightmare Mirror. Nehelenia captured all Sailor Senshi, leading Sailor Moon to save them, but at the end she was defeated when Sailor Moon assumed her ultimate form, Eternal Sailor Moon. The Sailor Senshi helped her to realize her true dream, to have a friend she could talk to. Sailor Moon granted her wish, and sent her back to the past. Nehellenia woke up, restored to a child, in her palace, where the people of the Dead Moon were still in their natural human-like forms as well as their planet itself was in its glorious original state, and where Queen Nehelenia herself could this time start over and find love and friends.

Queen Nehelenia can shoot energy waves of darkness, and also spiderlike threads. She is also impervious to most attacks.

In the manga, she was skilled in crafting curses, as well as being a strong force of darkness. She cursed Elysion, which was only protected by Helios until the eclipse occurred, which would infect Elysion, Helios, Tuxedo Mask, the Earth, and eventually Sailor Moon. She was capable of placing a prophecy of death on the infant Princess Serenity in the Silver Millennium, which was fulfilled by the Dark Kingdom. She was also able to corrupt the four Asteroid Senshi while they were in slumber, turning them into her Amazoness Quartet.

She was able to create an illusion around Earth that the solar eclipse had ended shortly after her arrival, when in fact the eclipse remained, casting darkness on the Earth, until she was finally defeated. 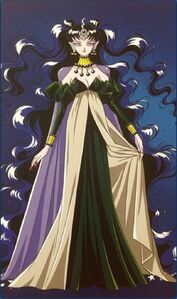 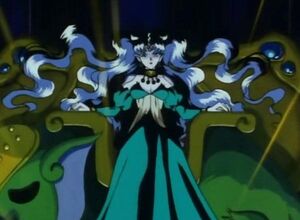 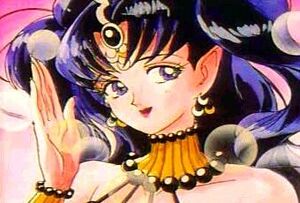 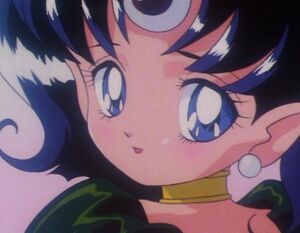 Queen Nehelenia after Sailor Moon sent her back to start life over again and helped her find her true dream. 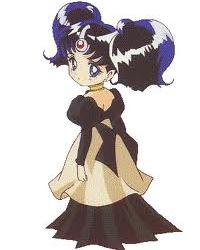 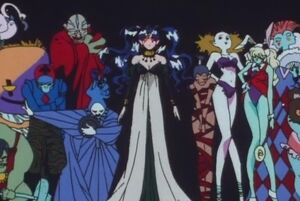 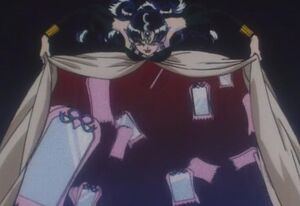 Queen Nehelenia devouring all the dream mirrors from her retainers and subjects, thus keeping her immortal. 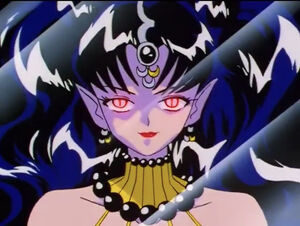 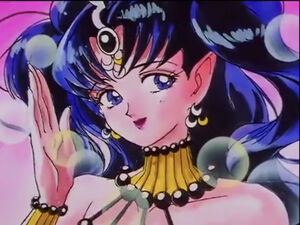 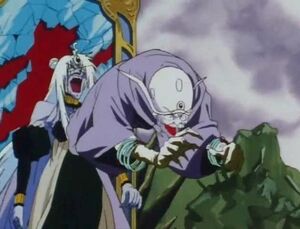 Nehelenia attacking Sailor Moon for depriving her beauty by lunging a Zirconia figure at her. 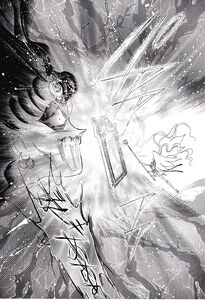 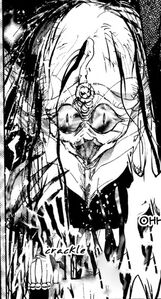 Queen Nehellenia being cursed to a crone. 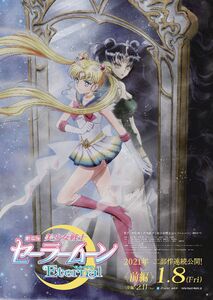 Queen Nehelenia in a poster.